Use of Endoknife in Laparoscopy- An Innovation

Tissue retrieval in laparoscopy is a challenge despite various available techniques. Each technique has its own merits and demerits.The choice of tissue retrieval depends on the type and size of specimen to be delivered.We present here our technique of debulking of a large uterus with use of endoknife.With this technique large specimen can be debulked and retrieved vaginally in hysterectomy.

Laparoscopy is one of the most preferred ways for hysterectomy due to its merits such as minimal incision, less duration of hospital stay and less post operative pain. Delivery of large specimen post hysterectomy is a challenge. Tissue retrieval techniques should adhere to principals of laparoscopy. Adhering to the principles of minimal access surgery, one has to retrieve the specimen from the abdominal cavity in such a way so as to not cause any infection, or tumor implantation or spillage. Tissue retrieval in laparoscopy can be done by following techniques; removal through trocar/ trocar site, culdotomy, enlarging the  incision, mini-laparotomy, or morcellation. Bulky specimens can be debulked vaginally by coring technique and retrieved vaginally. Power morcellation is used to debulk larger specimens and retrieve through side port. Power morcellation, if not done in an endo bag, causes spinning of tissue during debulking leading to  micro spillage.

A 45 year old woman was posted for total laparoscopic hysterectomy in view of menorrhagia with multiple uterine fibroids. Ultrasonography showed multiple fibroid uterus with a well defined hypoechoic mass arising from the posterior wall of yhe uterus measuring 6x7x5 cm. Clinically uterus was around 20 weeks in size. Upon insertion of the laparoscope, a large uterus with multiple fibroids and a large posterior wall fibroid was seen. Hysterectomy was completed with routine steps, after which it was not possible to retrieve the specimen through the colpotomy incision.
Thus to debulk the large uterus in such a way so as to remove it through the colpotomy incision, an ENDOKNIFE was used. The idea was to make the large globular uterus into an elongated strip which could come out though the colpotomy incision. Thus as shown in figure 2, the endoknife was used to cut the uterus starting from above the cervix in circular manner so as to make it into a elongated strip. This enabled it to come out easily as an elongated structure. 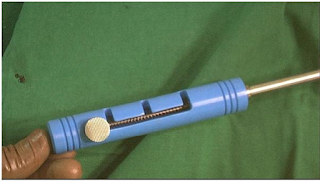 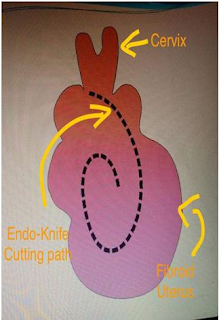 Figure 2. Showing the cutting path of the specimen 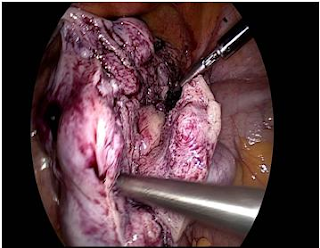 Figure 3. Specimen held with tenaculum and endoknife cutting from other side port 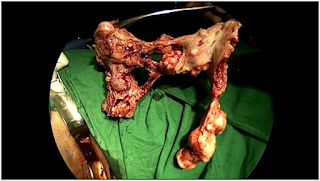 Figure 4. Final specimen after removing through the colpotomy incision

Tissue retrieval in endoscopy is a challenge especially for bulky masses. Tissue retrieval should adhere to the principles of minimal invasive surgery. One method of tissue retrieval is to enlarge one of the side port incisions into a mini laparotomy and remove the specimen, but this is against the principles of laparoscopy.[1] The retrieval for large uterus or big fibroid is done by power morcellation. Power morcellation causes tissue spinning and thus leads to micro spillage. Power morcellator is an expensive instrument and requires energy source. Endoknife is manually operated, thus making it cost effective. Endoknife is a good alternative for low resource setting. Endoknife can be introduced from a 5mm side port.
“The Orange peel technique” that Harrith Hasson has described is a technique in which scissors are used to peel off the tissue in the same way as one would peel off an orange. Before the availability of morcellators, scissors were used to have the same effect as that of a morcellator by making the tissue elongated and removing from the trocar cannula.[2] The long, thin strips then can be easily extracted through the trocar cannula. Unfortunately, laparoscopic scissors are too small or inadequate to incise a large specimen. Thus the use of an endoknife.
Further morcellator cannot be used in cases of suspected malignancy where tissues not only can be embedded in the surrounding areas but also tissue may be lost for histopathological diagnosis.[3]
Thus, tissue can be held with a tenaculum and debulked using an endoknife and the specimen is retrieved either vaginally, or from a colpotomy incision or even through the trocar cannula. The endoknife instrument has various positions namely 0, 1, 2 in which the blade is completely inside, half outside or completely outside. During insertion the blade is kept completely inside to avoid injury to surrounding structures. Endoknife does not cause any spinning of tissues, so reduces chances of tissue embedding and spillage.
Also during the myomectomy, while not removing the uterus, if one prefers posterior colpotomy rather than morcellation, endoknife can be used to debulk and make an elongated structure so as bring out the specimen through the small posterior colpotomy incision.

Tissue retrieval is an important issue in minimal access surgery. Various methods are being currently used and new technologies are being developed to make this procedure safe and effective for the patient. Thus as seen in this case, endoknife can be safely used as a cost effective method to remove the specimen.