A leiomyoma is the most common pelvic tumor in women. It is found in about 20–30% of women above 35. Extrauterine leiomyomas are rare. A case of a leiomyoma in the pubovesicocervical fascia is reported here. The patient presented with a complaint of feeling a mass in the vagina on self examination, which was unusual. A leiomyoma in this location has not been reported before in the literature.

A 34 year old woman with two normal deliveries in the past, presented with a complaint of the presence of a mass that she could feel inside the vagina. There was no abnormal vaginal bleeding, leucorrhea, urinary disturbances, difficulty in defecation or dyspareunia. Her menstrual cycles were regular, every month and were associated with normal flow over 3-4 days. There was no dysmenorrhea. Her medical and surgical history was not contributory. Her general condition was fair and vital parameters were within normal limits. Her general and systemic examination findings were normal. Abdominal examination showed normal findings. A speculum examination showed a 2 cm long and 1.5 cm wide projection from the anterior vaginal wall, looking like portio vaginalis. A normal looking cervix was seen 1 cm behind it (figure 1). A bimanual pelvic examination showed the uterus to be of normal size and displaced posteriorly. A 5 cm long, 3 cm wide and 2 cm deep mass was felt between the urinary bladder in front and the uterus behind. It was nontender and firm in consistency. The lower end of the mass was projecting into the vagina. A diagnosis of pelvic extraperitoneal mass was made. A computed tomography (CT) of the abdomen and pelvis confirmed the presence of the mass between the bladder and the uterus (figure 2). There was no connection between the mass and the uterus or the urinary bladder. The kidneys and ureters were normal. Considering the possibility of malignancy or local recurrence of a benign tumor in that location after excision of the mass, the patient was referred to an oncology center. A biopsy was obtained there, which showed it to be a leiomyoma. Immunohistochemical study showed that the tumor cells were diffusely positive for smooth muscle actin (SMA) and desmin reinforcing smooth muscle differentiation. She was referred back to us for further treatment, with a statement that it was polyp from the cervix. A reference  was made to urologists, considering the risk of bladder injury during excision of the mass. The urologist diagnosed it to be a cervical polyp and assured of help during surgery, should the urinary bladder get injured. Her tests for fitness for anesthesia showed normal findings. Vaginal excision of the mass was made by cutting the epithelium over it and dissecting it sharply, safeguarding the urinary bladder and ureter carefully. A mass measuring 7x4x2 cm was excised. It had no connection with the urinary bladder, uterus or ureter. The cavity left behind was occluded with interrupted sutures of No. 1-0 polyglactin. Redundant part of vaginal mucosa was excised and vaginal epithelium was sutured with interrupted sutures of No. 1-0 polyglactin. The patient made an uneventful recovery. Histopathological examination of the mass showed features of a classic leiomyoma with hyalinization. There was no nuclear atypia, mitoses or necrosis. A diagnosis of a leiomyoma was made. 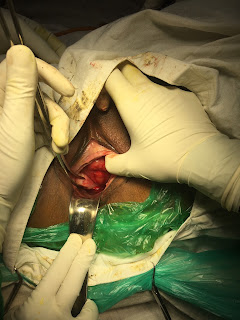 Figure 1. Appearance of the mass on speculum examination of the vagina. 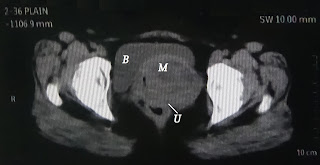 Figure 2. CT scan of the abdomen and pelvis. The mass is seen between the uterus and the urinary bladder. 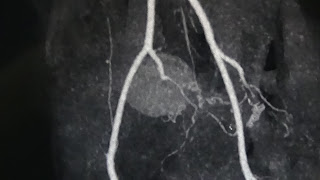 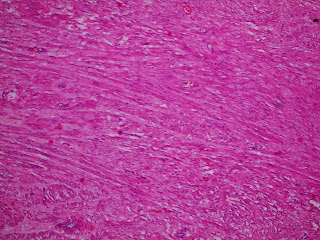 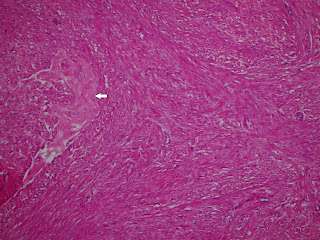 Fig. 5. Smooth muscles cells arranged in interlacing fashion with a focus of hyalinization denoted by an arrow.  [H&E x 100] 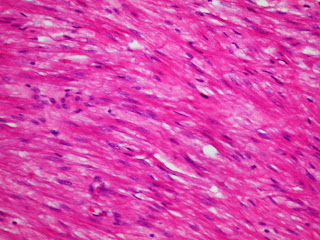 A leiomyoma is the most common pelvic tumor in women.[5,6] It is a benign smooth muscle tumor, usually arising from the myomatrial cells. Vaginal smooth muscle tumors are rare. Vaginal epitheloid leiomyoma is ever rarer.[7] It was a differential in the case presented, which was ruled out subsequently by histopathological examination. A true broad ligament leiomyoma arises from smooth muscle in the walls of blood vessels or from embryonic remnants of paramesonephric duct. Similar tissue exists in the pubovesicocervical fascia. Hence development of a leiomyoma in this location can be expected. But such a case has not been reported so far. Development of solid tumors in retroperitonal space or extraperitoneal space raises the suspicion of a sarcoma,  lymphoma, epithelial tumour, benign neurogenic tumor, lipoma, angiomyolipoma, fibromatosis and metastatic tumor from elsewhere. Many of these benign tumors have a tendency to spread locally and recur despite wide excision. In our case, a biopsy at a cancer institute showed it to be a leiomyoma. The diagnosis was confirmed by review of the slides in our institute. The diagnosis was confirmed on histopathology of the tumor after its surgical removal. An unusual feature of this tumor was that it was growing between the urinary bladder and the uterus in its upper part, and into the vaginal cavity under the anterior vagina in its lower part. A vaginal leiomyoma usually expands the vagina over it and grows downwards. Growth of the leiomyoma between the urinary bladder and the uterus in this case suggests that it was a tumor that developed between the urinary bladder and the uterus extraperitoneally and grew downwards, expanding the vagina over its lower end. It had not grown out from the uterus, the cervix or the urinary bladder, as there was no physical connection between any of these structures and the leiomyoma. It was surprising that the woman examined herself and felt the tumor. It was more surprising that the tumor was mistaken to be arising from the uterine cervix by oncologists and urologists. This emphasizes the fact that such tumors should be treated after joint consultation between gynecologists, urologists and oncologists. Imaging in the form of ultrasonography, computed tomography and magnetic resonance imaging avoids such errors in diagnosis and helps manage such cases better. The final diagnosis in all cases is by histopathological examination.[8] A needle aspiration biopsy is useful. In cases like the one presented here, it is easy as the mass is accessible vaginally and can be biopsied easily. Removal of the mass can cause inadvertent injury to the urinary bladder and/or the urethra. A cautious and meticulous technique helps avoid such mishaps.

I thank Dr. Sreshthha Mahanti for clinical photograph of the patient.