A Rare Case Of Campomelia

Campomelia is a rare lethal osteodysplastic syndrome characterized by abnormal curving of the long bones. Here, we present a case of a 29 year old primigravida with 19 weeks gestation with campomelic dysplasia who underwent termination of pregnancy.

Campomelia is derived from Greek words campto, meaning bent and melia, meaning limb. It is rare skeletal disorder with incidence of 1 in 10,000.[1]   It has autosomal dominant inheritance caused by alterations in SRY-related HMG-Box Gene 9 (SOX9) located on chromosome 17.[2] This gene is essential for both chondrocyte differentiation and sex determination. This condition involves various systems, characteristic being shortening and bowing of long bones.

A 29 year old primigravida who had conceived after multiple cycles of ovulation induction (details of which were not known) presented at 19 weeks and 4 days for termination of pregnancy. Maternal screening for dual markers was normal. Ultrasonography was suggestive of bilateral femur length of 20 mm, corresponding to 16 weeks which was less than third percentile for that gestational age with bow legs. (Figure 1) There were only eleven pairs of ribs. These findings were consistent with campomelic dysplasia. Other systems appeared to be normal in malformation scan.

Genetic counselling was done by geneticists. She and her relatives were counselled about anomalies and poor prognosis. They opted for termination of pregnancy. Hemogram, liver and renal function tests, blood sugar levels and thyroid function tests were all normal. Abortion was induced with 400 microgram misoprostol and she aborted after five doses of misoprostol on the second day. A 300 gram female fetus with short thighs and no other obvious external dysmorphic features. The X-ray of abortus revealed curved and short femora. (Figure 2) Genetic studies on the abortus were not done as the parents could not afford the test. Karyotyping of both parents and chorionic villous sampling in the next pregnancy was advised at discharge. 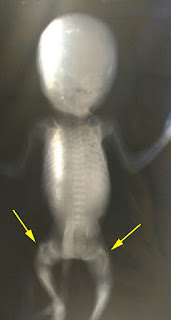 Campomelic dysplasia is a rare form of congenital short limbed dwarfism. It is an autosomal dominant condition caused by heterozygous mutation in SRY related HMG-Box gene (SOX9) on chromosome 17q24. This gene codes for a protein transcription factor which is responsible for both bone formation and sex organ development. Alteration in this gene prevents the SOX9 protein from properly controlling the genes essential for normal development of skeleton, reproductive organs, and other parts of the body. Defects in skeletal features include small scapula, small bell-shaped chest, twisted spine, club foot, dislocated hips, short fingers and toes and eleven pair of ribs.  The characteristic features are short limb bones and bowing of femur and tibia. Various systems may be involved, but respiratory distress is a common cause of death in such infants.[3] Postmortem may have revealed presence of any other fetal abnormalities in this fetus, but the parents were not willing for the same.
Campomelia can be a part of a rare syndromes like called FATCO syndrome (fibular aplasia, tibial campomelia, oligosyndactyly), Al-Awadi syndrome and Shinzel phocomelia.[4] Spinal appearance, thoracic shape, associated hydrops and polyhydramnios along with short limbs are helpful in determining fetal skeletal dyplasia. Skeletal dysplasias with bent long bones can occur in osteogenesis imperfecta type II, kyphomelic dysplasia, and Stuve-Wiedemann syndrome.
Babies with these dysplasias have high mortality rate, and in those who survive, high morbidity. A 17 years old teenager with intelligence quotient of 45 is the oldest reported case of campomelic dysplasia.[5] Mortality in neonatal period is 77% according to a study conducted in 1995.[6] In this case, the patient was already counselled by the private practitioner about genetic risks and wanted termination of pregnancy. Amniocentesis and confirmation of diagnosis would not have been possible within 3-4 days for termination, hence termination was conducted. After termination of pregnancy, the placenta can be sampled to acquire DNA for SOX9 gene mutation. The terminated abortal products could have been considered for genetic examination and the exact genetic problem could have been ascertained. However, the parents were not affording for the same.
Preimplantation genetic diagnosis during in vitro fertilization(IVF-PGD) is a technique which helps in diagnosis of such single gene disorders within an embryo which may be passed when one or both parents are carriers.[7] Only the unaffected embryos are transferred in this procedure. This avoids time consuming prenatal diagnosis done after conception and avoids a difficult decision of termination of an ongoing pregnancy once fetus is found to be affected. Whether this malformation was related to ovulation induction drugs could not be ascertained and may also need further detailed analysis.
There are non-profit organisations like ‘Little people of America’ and ‘European skeletal dysplasias network’ which provide support to people with short stature and their families.

Campomelic dysplasia is a rare lethal disorder with morbid outcome and is caused by mutation in SOX9 gene. It can be diagnosed prenatally by doing a thorough fetal sonogram or using invasive prenatal diagnosis; either chorion villous sampling or amniocentesis. Parental counselling and support is essential in such cases. Early identification and termination of pregnancy is the mainstay of the management.