Massive labial edema is generally related to underlying systemic pathology, mainly preclampsia and diabetes. It can also be associated with infection, autoimmune disorder, hypoprotienemia, trauma,  connective tissue disorder, neoplastic, and inflammatory conditions. Here we are describing rare case of hormone dependent bilateral hemangioma of labia minora which presented as peduncalated bilateral massive odema of labia minora in a normotensive, non-diabetic 25 weeks pregnant woman who also diagnosed to have aortoarterits. Such a tumor has not been described in the vulva in the world literature before.

Massive vulval edema is usually sequelae of an underlying systemic disease in pregnancy.[1] Isolated vulval edema in pregnancy is rare. We are presenting  a case of bilateral peduncalated hemangiomas of the labia minora  in a 25 weeks pregnant woman, which was initially considered to be edema due to lymphatic obstruction. The prepregnancy symptoms of the woman were also curious. Treatment of Vulval edema depends on pathophysiology and treatment options are steroids, furosemide, drainage, and dressing. A hemangioma of the vulva and aortoarteritis are best treated only when the woman is not pregnant.

A 25 year old woman, married since 2 years, gravida two with one spontaneous abortion at 2 months of amenorrhea in the past was referred to our tertiary center from a private hospital for further management of labial swellings. She had 25 weeks of amenorrhhea. Patient had been symptomatic since last 15-20 days with increasing pain and size of swellings. The swellings used to increase in size at midcyle from the time of menarche, and would reduce in size during menses. She had been treated with NAIDs with no relief prior to referral to our center. She did not have any history of fever or trauma locally. There was no history of claudication, tingling, numbness, blurring of vision, syncopal attacks, chest pain, breathlessness, palpitation, oral ulcers, or photosensitivity. Her general examination showed no abnormality. Her radial and brachial pulsations were not felt on both sides. The carotid, femoral and dorsalis pedis pulstions were felt well. Her blood pressure in the upper limbs was 90/60 mm Hg, and in the lower limbs 124/70 mm Hg.
Her systemic examination showed no abnormality. Local examination showed right labium minus swollen to a size of 5x4x4 cm, which was very tender. The left labium minus was bilobed,  very tender, and swollen to a size of 8x7x8 cm. The lower part of the swelling contained clear fluid like lymph. Its surface showed hemorrhagic vesicles and erythema. The uterus was enlarged to a size of 24-26 weeks of gestation. Fetal parts were felt and fetal heart sounds were normal. Her investigations showed normal plasma sugar levels, renal and liver function tests, and levels of ANCA, APLA, ACLA, C3, C4, ANA, dsDNA, Beta 2 Glycoprotein and RA factor.
Ultrasonographic examination of the masses showed presence of large hemangiomas in both the labia minora. Magnetic resonance imaging (MRI) of the pelvis showed multiple lobulated outpouching from labia minora measuring 3.7 cmx4.7 cmx 3.3 cm, which were T2/ STIR hyperintense & T1 hypointense with a leash of flow voids within. On post contrast study it shows intense homogenous enhancement. The diagnosis of a benign vascular lesion in each labium minus was made.
Doppler studies showed monophasic wave form with decreased velocity in bilateral ulnar arteries and right carotid artery suggestive of narrowing at brachiocephalic trunk and left subclavian origin.  MRI with contrast enhancing showed complete occlusion of left subclavian artery, high grade narrowing of segment 2 of right subclavian artery, wall irregularities involving the brachiocephalic trunk, proximal left common carotid artery. A diagnosis of aortoarteritis was made.
A general surgical reference was made. The surgeons drained the fluid component of the swelling of the left labium minus. Residual collection ruptured spontaneously later and the remaining fluid drained out. The patient was then treated with amoxycillin-clavulanic acid orally and glycerine magnesium sulphate dressing twice a day. The size of the swellings decreased considerably. She was discharged from the hospital, with instructions to continue local dressing at home. One month later the swellings were found to be reduced further. The patient was advised to have an institutional delivery, and then undergo interventional radiological treatment for her hemangiomas, and follow up with cardiologists and cardiovascular surgeons for her aortoateritis.

Sizes Of The Masses At Different Times After Admission 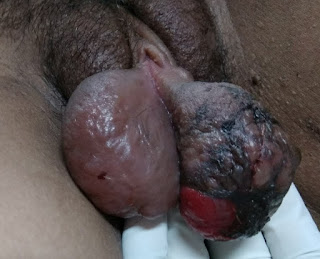 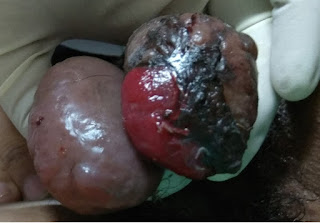 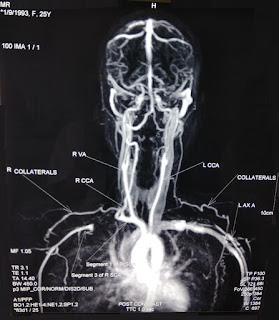 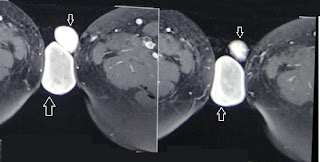 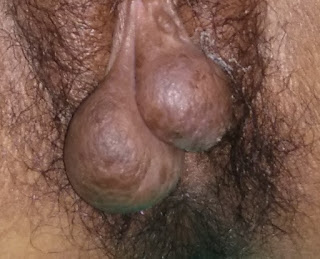 While edema is common in gravid women, it is generally present in the lower limbs, face, hands and rarely in the vulva. Isolated vulvar edema generally found to be associated with severe preclampsia, diabetes mellitus, septicaemia, anemia, renal problems, infection,trauma, hypoalbuminea, obstructed labour. Depending upon the pathophysiology it is treated with steroids , furosemide, albumin. The patient presented here was initially diagnosed as a case of massive edema of the vulva and treated accordingly. After investigations the diagnosis of hemangiomas was made. However there was some local infection and edema resulting from it. So the treatment was continued, which reduced the swelling to some extent. Lymphatic collection in the left labium minus was thought to be a lymphocele, due to lymphatic obstruction. The surgeons believed it to be due to ‘Labial Compartment syndrome’, which is characterized by prolonged standing of swelling resulting into microvascular necrosis of tissue. Hence they drained the fluid. However it might have been unnecessary, as the residual collection ruptured spontaneously later and the fluid drained out. It might have been somewhat helpful in increasing flow to the edematous tissues.
In our case, vulvar edema was probably secondary to local superficial infection. The main bulk of the swellings was the hemangiomas. Aortoarteritis was a coincidental finding, and had nothing to do with the swellings. A curious feature of the hemangiomas was that they were hormone dependent. From the time of menarche, they increased in size midcycle, when estrogen production peaked, and reduced in size during menstrual flow. Thus it was a (estrogen) hormone dependent tumor. Such a tumor has not been described in the vulva in the world literature.
Hemangioma is a vascular malformation, a developmental anomaly which does not regress and is composed of dysmorphic vessels with normal endothelial turnover. It is of arterial, venous, capillary, lymphatic or mixed type. Vascular malformations can also be differentiated at the hemodynamic level between low-flow malformations, that include capillary and venous malformations, and high-flow malformations that include arterial malformations, arterio-venous fistula. The diagnosis of vascular malformations can be strongly suspected by careful history and physical examination. Bluish, easily compressible non-pulsatile masses that increase in size with manoeuvres to increase venous pressure (Valsalva maneuver) are usually venous malformations.3 6 Pulsations are present in high flow vascular malformations. Clinical symptoms include superficial dyspareunia, swelling, discomfort, pain, discharge, secondary infections and cosmetic problems.[2,3,8] Vascular malformations may be complicated by cutaneous ulceration and haemorrhage, limb hypertrophy or even high-output cardiac failure.[7] In our case it was an arterial type malformation.
Differential diagnosis of vulvar vascular malformations are: varicosities, vulvar malignancies, nevi, melanomas, endometriosis, nevi and bartholins cyst. Venous malformations should be distinguished from vulvar varicosities. Pelvic venous hypertension may lead to vulvar varicosities in pregnancy, one of its typical complication and they appear as a grape-like cluster of veins on the vulva.[3-6] While vulvar varicosities result from venous insufficiency or stasis, vascular malformations of the vulva are developmental anomalies composed of abnormal vessels and they do not regress. Vascular malformations may undergo a rapid increase in size as a result of infection, thrombosis, trauma, surgical intervention and hormonal changes (as during puberty or in pregnancy).[2,5,7]
Vulvar vascular malformation need no treatment if there is no significant symptom. All complicated vascular malformations require treatment. Surgical excision is the curative procedure but can be complicated by significant loss of motor function, nerve damage and massive bleeding. Alternative treatment methods are available. Sclerotherapy is indicated in case of small and not diffuse venous malformations. Large arterio-venous malformations can be treated by embolization, where it can be an alternative to, or a preparation for operation. Selective embolization sometimes has to be carried out through two or more steps to avoid or reduce risks of complications, primarily  causing occlusion of important anomalous arteries.
In our case , patient was managed conservatively with daily dressing with glycerine magnesium sulphate, size of odema decreased. Patient symptoms were improved and was also started on steroids, aspirin for aortoarteritis as per medical opinion. Vascular surgeons advised bilateral internal iliac angiogram post delivery to decide final mode of treatment. Obstetric plan of management was to achieve a vaginal delivery, aided by holding the vulvar masses laterally.