A case of a 27 year old primigravida with an incidental finding of a large central cervical fibroid in pregnancy is being reported. She was managed conservatively throughout her pregnancy and subsequently had to have a classical cesarean section to deliver a female child.

Cervical fibroid in pregnancy can make pregnancies high risk as complications in the antepartum, intrapartum and postpartum period can occur. [1] It may lead to malpresentations. Sometimes they are so big that they fill the entire pelvis making vaginal deliveries impossible.They tend to increase in size during pregnancy, which eventually decrease in the postpartum period. Patient after puerperium can have a definitive treatment like myomectomy or hysterectomy.

A 27 year old, primigravida registered in our hospital at 34 weeks of gestation with cervical fibroid. She had registered in a private hospital in her 2nd month of pregnancy. Routine ultrasonography was suggestive of an anterior wall fibroid of 8.3*7.6 cms. She was given more vigilant antenatal care and underwent serial ultrasound at different weeks of gestation. The serial ultrasound showed increasing sizes of the fibroid; which were like 8.3*7.6 cm at 8.3 weeks of gestation, 11*7 cm at 15 weeks, and 13.5 *9.5 cm at 20.3 weeks.The fibroid regressed in size to 11.5*11.5 cm at 29-30 weeks, which decreased further to 8.3*7 cm at 36 weeks of gestation. At 34 weeks she was referred to our hospital for registration for further management. She had no other medical or surgical high risk factors. At 37 weeks of gestation her abdominal examination findings showed the the uterus corresponding to 36 weeks in size was relaxed, central cervical fibroid was felt below the fetus. Fetus was in the right dorso superior position. Fetal heart sounds were present/ regular/ 140 beats per minute.  Vaginal examination found a high placed closed cervix, fibroid was felt through the anterior right and posterior fornix and also through the right and the left fornix. Pelvis was empty. No fetal part or the fibroid was felt in the pelvis.  Decision to perform elective cesarean section was made and she was admitted for the same. Serological and biochemical investigations were done and they were within normal limits. She was counseled and she consented for a classical/ Lower segment cesarean birth. She also consented for a cesarean myomectomy or a cesarean hysterectomy if required. During cesarean section uterus was extremely dextrorotated by 90 degrees bringing the left adnexa anteriorly in the midline, huge cervical fibroid of 20*15 cm was seen. The lower uterine segment was replaced with the fibroid that was extending to the broad ligament (Figure 1). Uterovesical fold was not elevated. Bladder and uterovesical fold were below the largest diameter of the cervical fibroid. Delivery of fetus was not possible through an incision through the lower segment without incising the myoma hence classical incision was taken on the upper part of the uterus (Figure 2). A female fetus weighing 2.450 kg was delivered by breech. Fibroid was left untouched. Uterus was closed in 2 layers. Hemostasis was confirmed. Abdomen was closed in layers. She was stable in the postoperative phase and was discharged on after 4 days. Sutures were removed  on postoperative day 14, wherein the wound had healed well. She was called after 6 weeks for fibroid size evaluation. 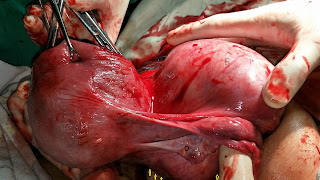 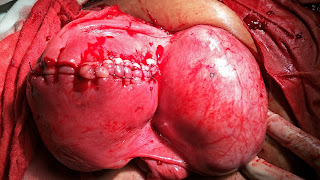 Fibroids are most commonly found in the uterus but rarely can be present in the cervix or the vagina. On the cervix they are most commonly found in its supravaginal part.[2] These supravaginal fibroids can be found at various positions, on the right, left or they can be centrally placed, filling up the pelvis. The central cervical fibroid pushes the uterine body  superiorly and the cervical os is found high up on digital pelvic examination.[3] The uterus usually sits on the tumor and this appearance is typically described as a ‘lantern on top of St Pauls’ cathedral’.[4] According to a study conducted by Laughlin SK et al. pregnancy with cervical fibroid has a prevalence of 10.7%.[5] These can present as recurrent abortions, acute abdominal pain due to red degeneration, preterm deliveries, non cephalic presentations, obstructed labor leading to increased cesarean section.[6] Rarely, these fibroids may not interfere in normal vaginal deliveries as represented in a case report by Kanti et al.[7] The fibroids usually increase in size during pregnancy and reduces considerably in the postpartum period. Woman presenting with central cervical fibroid generally undergo  elective cesarean section as a mode of delivery, as was done in our case. The size of fibroid is an important factor in deciding type of incision, bigger fibroids usually require a midline vertical incision.[3] Sometimes delivery of the fetus is not possible through a lower uterine incision even if it is possible to place the incision as big fibroids sitting just superior to the lower segment interfere in the delivery of the fetus necessitating the need for a classical cesarean incision, as was required in our case. The anterior and central cervical fibroid, specially which spreads into the broad ligament tends to undermine the bladder and displace the ureters leading to increased risk of ureteric injury during hysterectomy.[8] Fibroids in pregnancy should be managed conservatively during the antepartum, intrapartum and postpartum periods and this management has shown to give good clinical outcomes. Myomectomy can be delayed till the size of the tumor decreases following which they are easy to remove.