Leiomyoma or uterine fibroids are one of the most common benign tumors of the reproductive age group. These may remain asymptomatic or may present as an incidental finding in approximately 50% of the cases.[1] Generally fibroids are associated with complications in pregnancy like malpresentations, dysfunctional labor, APH, PPH and also secondary infertility.[2,3]  As these are estrogen dependent they may grow or undergo red degeneration during the course of pregnancy.[4] Excessive blood loss may occur during surgery. However, in this case good preoperative workup and mapping of the fibroid along with careful planning of the classical cesarean section helped in the safe management of this patient.

A 35 year old G3P2L2 was referred to our  hospital with 36 weeks of pregnancy. Her general and systemic examination were normal. Her  hemoglobin was 10.2 g/dl. On obstetric examination she was 36 weeks pregnant had a transverse lie and an additional firm mass of around 20 x 19 cms palpable below the umbilicus. On vaginal examination fibroid was felt below the presenting part. Ultrasound showed a single live fetus of about 36 weeks of gestation, with an estimated fetal weight of 2.45 kg and a fundal placenta. Multiple fibroids were also detected. A large fibroid of 21 x 5.6 x 11 cms extending from the fundus right up to the cervix in a ‘L’ shaped manner was seen; a 2nd intramural  fibroid of 2.3 x 1.4 cms was seen in the anterior uterine wall. Another 5.6 x 3 cm intramural fibroid on the lower segment of the uterus was identified. A 4th intramural fibroid measuring 4.7 x 3 cm  on the anterior wall of the uterus was also seen. As fetus was in the transverse lie, fibroid was felt below the  presenting part, and the fibroid was in a L shaped manner going from the uterine fundus across the lower uterine segment, we counseled the patient for need of classical cesarean section as the lower segment cesarean section may have resulted in the extension of the incision  onto the fibroid which would have caused excessive blood loss and possibility of an emergency obstetric hysterectomy. After the necessary preoperative investigations she underwent classical cesarean section. A live male baby weighing 3.07 kg was delivered out by breech presentation. Intraoperative observations also included the presence of multiple fibroids. (Figure 1, 2) A 4 x 3 cm fibroid was seen in the lower segment towards the left side, another fibroid with similar dimensions was near the fundus on the anterior wall. A  large 15 x 10 x 10 cms broad ligament fibroid towards the right side extending from the infra hepatic region of the uterus to the lower segment of the uterus was seen. The fibroids were left alone to avoid any complications which might have occurred as pregnancy results in a hyper vascularized state of the uterus. The operation and the postoperative period were uneventful and the mother and the baby were both discharged on the 7th post operative day. The uterus was 20-22 weeks in size at the time of discharge. 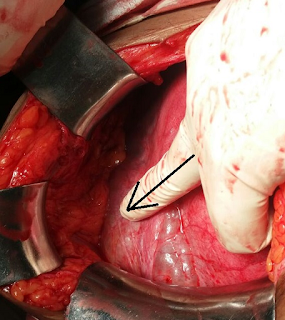 Figure 1. A 4 x 3 cm fibroid in the lower segment towards the left side. 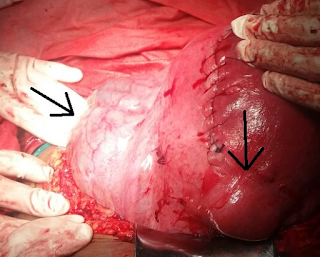 Incidence of fibroids may vary from 0.1% to as high as 12.5%.[5] Generally the fibroids are unaffected with pregnancy but in some cases it may increase in size by about 10%.[6] Pregnancy complicated by fibroids increases the rate of cesarean section due to malpresentation and difficult labor. About 10– 30% of patients develop complications like red degeneration, infertility and torsion.[3] In this case we were lucky that there were no complications seen.
A classical cesarean section was planned as on ultrasonography the fibroid was visualized from fundus to the cervix and hence, any incision taken through the lower segment entailed the risk of going through the fibroid that would have entailed doing a myomectomy. Even though recent studies have shown that there is no increased risk in performing myomectomy along with the cesarean section[7] we wanted to avoid such an event in this patient as there were multiple fibroids present. As a huge fibroid extending from the fundus to the cervix would have got incised during a lower segment transverse incision and a myomectomy of this fibroid would have caused extensive blood loss a decision to perform classical cesarean section was taken. Therefore, the decision of not doing myomectomy with cesarean seems to be justified.
In a study to evaluate the significance of number and the size of fibroids on the outcome of pregnancy by Ciavattini A. et al it was seen that increase in the size and the number of fibroids with pregnancy were associated with preterm births, malpresentations and higher incidence of cesarean section.[8] Our patient also had a transverse lie and hence required a cesarean delivery.
In a recent study by Ezzedine et al it has been advocated that cesarean section should only be advocated in cases where there are obstetric indications. In this case to the presence of transverse lie and huge fibroids in the lower segment favored the indication of a cesarean section and that to a classical one.[9] It has also been advocated not to go for myomectomy during cesarean or during the course of pregnancy as it may complicate the pregnancy. Hence, in this case also the fibroids were left as such during the cesarean section.