Sacrococcygeal teratoma is a tumour that arises from all the three germ layers. It accounts for 44% of all germ cell tumours. The incidence is somewhere in between 1 per 20,000 to 1 per 40,000 live births.[1] Females are more frequently affected .[2]

A 24 year old G3P2L2 with previous two vaginal deliveries presented to the outpatient department of our tertiary care centre at 28 weeks of gestation. A prior ultrasonography, done at 23 weeks of gestation showed a 8.3 x 6.1 cm solid cystic mass, with vascularity was noted at the caudal end of spine. Antenatally, pediatric surgeons opined that the patient should deliver in a tertiary care centre, and the neonate will need to be evaluated immediately post-delivery. This progressed to around 12.9 x 11.2 cm sized with volume of around 1096cc with polyhydramnios at 28 weeks. A week later, the dimensions were noted to be 14.5 x13.2 cm with volume of 1502cc, suggestive of rapid progression.

At 32 weeks of gestation she presented to the emergency in established active labour. In view of the large mass, emergency lower segment cesarean section was performed. She delivered a female child of 3.5 kg with Apgar score of 3/10 and 9/10. The external features of the teratoma in the neonate (Figure 1) was consistent with the radiological examination. The neonate was shifted to neonatal intensive care unit on controlled positive pressure ventilation as the baby was not able to maintain saturation. Pediatric surgeons advised MRI after stabilization. However, the neonates general condition continued to deteriorate, requiring further ventilatory support and soon needed inotropic support also. Due to ongoing bleeding and oozing of fluid from the teratoma, a picture of hypovolemic shock persisted and one unit packed cell transfusion was given. Further hemorrhage continued and the neonate succumbed on the fourth day of life due to hemorrhagic shock. 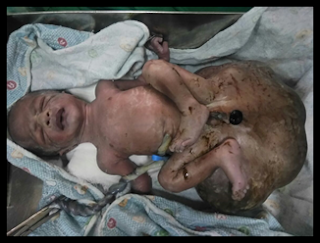 One of the most common tumors in newborns is sacrococcygeal teratoma. Tumor arises from Hensen node, located in the coccyx. Two dimensional ultrasound is used to make the diagnosis of sacrococcygeal teratoma antenatally. In the first trimester, diagnosis of these tumors may be missed owing to its small size. However, large, rapidly growing tumors with solid and vascular components, may be diagnosed earlier. Also, those diagnosed before 30 weeks of gestation, are associated with poor prognosis. In our case tumor was increasing rapidly in size, had solid and vascular components and was diagnosed at 23 weeks of gestation. Over few weeks, the tumour grew almost double in size.  Ultrasound doppler helps to know the amount of blood flow to the tumor.

In rapidly growing tumours, large amount of blood is directed towards the tumour, leading to heart failure and sick and hydropic foetus. Hence, a fetal echocardiogram is recommended.  Our patient was planned for a fetal echocardiogram but went into preterm labour. For detailed evaluation, fetal MRI is an option.
Small, relatively avascular cystic tumour are usually treated by aspiration. Various procedures can be done, the options being vascular procedures like embolisation of the tumour, balloon occlusion, thermocoagulation, sclerosis, endoscopic snaring of the tumor neck, laser/radio-frequency ablation. Radiofrequency ablation may result in large soft-tissue defects that require postnatal surgery. Debulking of the tumor can be done in some cases in the midgestation period, but experience is limited. An EXIT procedure (Ex-Utero Intrapartum Treatment Procedure) for resection of a massive sacrococcygeal teratoma can also been performed.
The morbidity and mortality of the sacrococcygeal teratomas can be reduced if they are diagnosed prenatally and the surgical management is performed during the neonatal period.[3] Other possible complications include hemorrhage within the tumour, polyhydramnios, pre-term labour and intrauterine fetal demise.
In our patient, there was polyhydramnios, ongoing hemorrhage inside the mass and preterm labour. In severe cases, sacrococcygeal teratomas with hydrops are associated with maternal risk for development of mirror syndrome, which is a severe form of preeclampsia and is associated with placentomegaly. This was not seen in our case.

A planned cesarean delivery is necessary for large tumors greater than 5 cm, with provisions for immediate resection if necessary. Delivery of the fetus through a cesarean section prevents dystocia, tumor rupture and profuse tumor bleeding.[4] An upper segment vertical uterine incision may be required.[5]  However, in our patient a lower segment cesarean scar was adequate for delivery. There were no intraoperative problems. When the diameter of the neoplasm exceeds 10 cm, the risk of rupture of sacrococcygeal teratoma is increased during the ablative tumour resection. In our case, size of the tumour was 14.5 X 13.2 cm with volume of 1502cc. Though there was no external rupture, the ongoing internal hemorrhage probably led to hemorrhagic shock, and eventually mortality.

Sacrococcygeal teratoma is associated with high perinatal morbidity and mortality. Despite early recognition, fetal salvage may not be possible when the tumour size is large. The best chance for the fetus lies when the delivery is an tertiary care hospital with close coordination between obstetricians, neonatologists and pediatric surgeons.