Transverse Lie And Dystocia Due To Asherman Syndrome

Intrauterine adhesions or uterine synechiae are bands of fibrous tissue that form in the endometrial cavity and sometimes the cervix. The degree of scarring can vary from thin strips of tissue to complete obliteration of the endometrial cavity. It can cause infertility or a number of obstetric complications. We present a case of uterine synechiae which caused a transverse lie and difficulty during delivery of the fetus during a cesarean section.

The incidence of uterine synechiae is 0.14% to 0.47%.[1,2] It is commonly associated with dilatation and curettage, endometritis secondary to infections like tuberculosis, uterine surgery like myomectomy and cesarean section and and prolonged use of intrauterine device.[4,5] Patients who undergo dilatation and curettage for retained products of conception after a miscarriage or retained placenta are more likely to develop uterine adhesions. The effects range from menstrual disturbances to infertility, recurrent pregnancy loss and placental abnormalities, malpresentations and premature rupture of membranes.[6]

A 25 year old gravida 4 para 1 living 1 spontaneous abortion 2,  registered at our tertiary care center at 27 weeks of gestation. She was referred from a private hospital in view of her ultrasonography (USG) finding suggestive of uterine synechiae on the lower uterine segment and placental insertion on it. She had one normal delivery in the past followed by two spontaneous abortions at 2 and 1.5 months of amenorrhea respectively for which she had undergone check curettage at a private hospital. Her subsequent menstrual periods had been irregular and the menstrual flow was scanty, associated with severe dysmenorrhea. She did not remember the date of her last menstrual period. USG at our center confirmed the findings of her previous USG. She was admitted at 39 weeks of gestation in antenatal ward in view of transverse lie and intrauterine fetal growth restriction for elective lower segment cesarean section. Her recent scan was suggestive of an intrauterine gestation of 35 weeks with transverse lie with fetal head towards maternal right and an intrauterine longitudinal adhesion band of 3 cm thickness, like a uterine septum. The placenta was attached to it. She underwent an elective LSCS with tubal ligation and delivered female child of 2.6 kg with an APGAR of 8/10. The baby had to delivered by a breech extraction. There was difficulty while delivering the head because it was held back by the intrauterine adhesions. A band of adhesion was noted  connecting the anterior, posterior and right lateral uterine walls (figures 1 and 2). The placenta was not attached to the band. The  band was clamped, cut and transfixed using polyglactin No.1 and tissue sent for histopathological examination. Rest of the operative course was uneventful. Patient had an uneventful postoperative course in the ward and was discharged on day 5. The histopathology showed hypertrophied smooth muscle covered with sheets of decidual stroma on one surface and no trophoblastic infiltration. 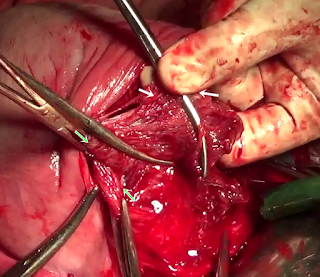 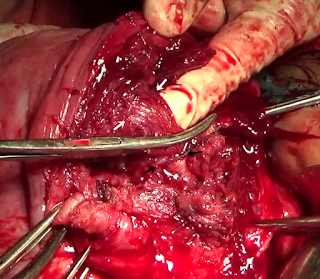 Uterine cavity is lined by endometrium which is divided into the functional endometrium that is shed during menses and the basal layer which is involved in regeneration of endometrium. It is believed that trauma to the basal layer during surgical procedure like dilatation and curettage or due to infection can lead to development of adhesions which could be flimsy or dense. Dense adhesions could further obliterate the uterine cavity and the cervix. The risk of developing synechiae increases with the number of check curettage.[3] The incidence of uterine adhesions is equal in all races thus ruling out genetic predisposition for development of the same however uterine adhesions developing secondary to chronic endometritis is more common in developing countries due to high prevalence of tuberculosis.[7] Hysteroscopy can be used for diagnosis as well as treatment of the same. Myometrial adhesions are more common. They show a thin layer of endometrium with glandular ostia on the surface. Histology of thick bands of fibrous adhesion shows dense fibrous tissue without any overlying endometrium.[8] Diagnosis of the condition can be made based on the history and a high index of suspicion in a patient with menstrual complaints or infertility following history of curettage or any uterine surgery. Tests like Saline infusion sonograghy, hysterosalpingography or magnetic resonance imaging can be used for confirming the diagnosis.[9,10]  The treatment depends on the presenting complaints of the patient. Those seeking medical attention for infertility could be treated with hysteroscopic adhesiolysis followed by hormonal treatment with estrogen to stimulate endometrial growth and prevent recurrence of adhesion formation.[11] The adhesions may also lead to obstruction of outflow tract leading to cyclical pain during menses and obstruction to menstrual flow may cause endometriosis.[12] Hence prompt diagnosis and treatment are necessary. As recently pregnant uterus is soft and under hormonal influence it is easily injured during curettage. As prevention is better than cure, medical alternative for evacuation of products of conceptus like mifepristone and misoprostol could be considered as better alternative.[Zhang J, Gilles JM, Barnhart K, Creinin MD, Westhoff C, Frederick MM (August 2005). A comparison of medical management with misoprostol and surgical management for early pregnancy failure. The New England Journal of Medicine. 2005;353(8):761–9.] The risk of preterm premature rupture of membranes, placental abruption, and malpresentation requiring cesarean section is significantly increased with uterine synechiae.[13-15] Cho reported intrauterine fetal death due to horizontal intrauterine synechiae.[An intrauterine fetal death due to horizontal uterine synechia.[16]
Our patient had intrauterine restriction of fetal growth, probably due to reduced blood supply to the placental site due to fibrosis. The fetus was in a transverse lie, which was also due to intrauterine synechaie. The band trapped the fetal head during delivery by cesarean section and made the delivery difficult. The band was myometrial, as its histopathology showed smooth muscle in them. The development of this form of adhesion is difficult to explain as myometrial tissue of anterior and posterior wall would adhere to each other by fibrous tissue and not smooth muscle. It is possible if there is detachment of some part of the myometrium from one wall which gets adherent to another wall. But that could happen with major surgery, while our patient had not undergone any major surgery in the past.

Uterine synechiae are a reversible and potentially preventable cause of infertility and further pregnancy complications. In the event of a pregnancy successfully proceeding to full term, mode of delivery can be decided based on the lie and presentation.