A 24 year old woman presented with a painful nodular swelling over the right side of the abdominal scar since 1 year with progressive increase in pain and size of swelling especially during menstruation. She also complained of serous discharge from it during menstruation. She had undergone a lower segment caesarean section four years prior. General examination was within normal limits. On local examination there was a approximately 2 x 2 cm tender, immobile nodular subcutaneous swelling in the right iliac fossa, 2 cm lateral and 3 cm above the scar. A provisional diagnosis of scar endometriosis was made. Ultrasound showed a 2.1x1.6 cm well defined hypoechoic lesion in the paramedian region in the subcutaneous plane with peripheral vascularity on colour Doppler suggestive of scar endometriosis.(Figure 1) MRI abdomen pelvis done suggested an oval shaped T1 hypointense and T2 heterogenous hyperintense lesion seen at the anterior abdominal wall on the right side measuring approximately 2.2 x 2 cm suggestive of scar endometriosis, and was posted for operative procedure in the post-menstrual period. 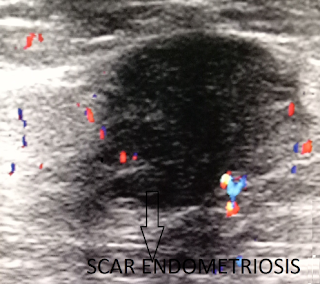 Figure 1. Ultrasound image of scar endometriosis showing vascularity on Color Doppler
Intraoperatively a mass of 3 x 2 cm, bluish in colour and hard in consistency was identified. The mass was situated below and adherent to the rectus sheath with rectus muscle below. The nodular mass was dissected from the rectus sheath and muscle to ensure that the entire mass was widely excised with surrounding clear margins and sent for histopathological examination. (figures 2 and 3) The layers of abdominal wall were reconstructed and sutured.

Histopathological examination revealed dense fibrocollagenous tissue with embedded endometrial glands surrounded by endometrial stroma suggestive of scar endometriosis. Patient was followed up after surgery for a period of 3 months. She did not have any complaints and was completely cured after the surgical excision. 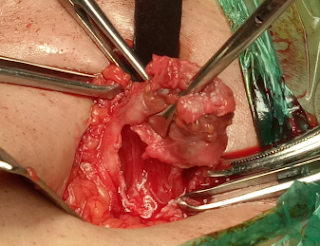 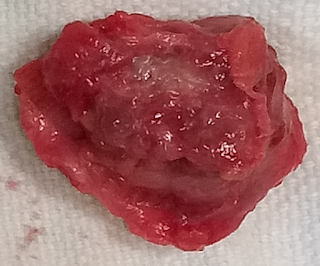 Discussion
Rokitansky gave the first description of endometriosis in 1860 with the most common site as pelvis. Asymptomatic endometriosis is seen in 1-7% patients of tubal ligation, 12-32% in women presenting with pelvic pain between age of 15-45 years, 9-50% in infertility and as much as 50% in adolescents with chronic pelvic pain or dysmenorrhea.[l] Scar endometriosis is a rare type of endometriosis occurring in extrapelvic sites that usually happens after surgery on the uterus and tubes. In our case, it was a cesarean section.
Scar endometriosis can mimck other common surgical and gynecological conditions. The diagnosis achieved at a preoperative stage is correct in only 20-50% patients.[3] The differential diagnoses include stitch granuloma, lipoma,  inguinal hernia, cyst, incisional hernia, abscess, sarcoma, desmoid tumor, lymphoma and primary or metastatic cancer.[4] Therefore, the clinician needs to rule out all of the above conditions before making the final diagnosis, for which a biopsy is imperative.

One theory states that endometrial tissue may also approach the surgical scar by vascular and lymphatic channels causing this disease. Hence, one must ensure secure closure of the parietal and preferably also visceral peritoneum during caesarean section and reduce dissemination of endometrial cells as it may also be associated with endometriosis at the surgical scar.[5] The complaint of cyclic pain in an incisional nodule or lump usually at caesarean scar is almost classical for scar endometriosis. This was seen in our patient also. Review of literature suggests that efforts should be made to narrow down the diagnosis with the help of imaging techniques and FNAC. In our patient, radiological examination was adequate. Sonography with color Doppler shows characteristic appearance of scar endometriotic lesions which is a hypoechoic, vascular, and solid mass with some cystic changes.[6] Computerized Tomography would show a well-defined soft tissue nodule with heterogenous post contrast enhancement and surrounding tissue showing streakiness. However, MRI is the most sensitive imaging modality and has ability to localize the lesion accurately in relation to the caesarean scar with the signal characteristics similar to background endometriosis. Various methods of hormonal therapy such as oral contraceptives, progesterones, gonadotropin-releasing hormone analogues, danazol have been used but they give only temporary relief and have a higher side effect profile. Thus, the treatment of choice is a wide surgical excision to healthy margins. Similar cases have been reported recently.[7,8] Sometimes, mesh placement may be required. Residual endometrial tissue may cause recurrences. Histopathology shows glands and stromal cells of endometriosis with the background of altered blood and foamy macrophages which is confirmatory for the diagnosis.
Histopathological evaluation is also important to make sure there is no malignant transformation. Although malignant change of scar endometriosis is rare, malignant changes may occur in long-standing recurrent scar endometriosis. Clear-cell carcinoma and endometrioid carcinoma are the common types.[9]
As mentioned above, certain surgical techniques such as closure of the uterovesical fold, parietal peritoneum, saline peritoneal washes prior to closure and using separate instruments and suture materials for closure of uterus and the abdominal wall, are options for prevention of future scar endometriosis. The usefulness of such practices is yet to be proved by studies and further research is needed in this matter which is difficult owing to the rarity of scar endometriosis cases.

Endometriosis involving scars is a rare condition that should be considered in reproductive age women with the classical clinical presentation of cyclical painful nodule at the scar site having previous obstetrical surgery. The amount of pain and size of mass may vary with the menstrual cycle. Surgical wide excision after diagnosing clinically and by radiological investigations is the treatment of choice and histopathological evaluation is the gold standard of diagnosis.