Good Pregnancy Outcome In A Case Of Previous B-Lynch Suture

Postpartum hemorrhage (PPH) is still one of the leading causes of maternal mortality and an important cause for morbidity in the developing counties. Uterine compression sutures, though recently introduced, have become popular and effective in the surgical management of PPH. However, long term outcomes after this procedure is largely unknown. Pregnancy outcome in a patient who had undergone B-lynch suturing in the previous pregnancy is presented here.

Uterine compression sutures involve the use of an absorbable suture material that tightly compresses the uterus to prevent atony and hemorrhage. The major advantage is that it allows uterine conservation. While short term complications such as failure of procedure, need for re-laparotomy have been described, intermediate term and long term complications are not well documented. A pregnancy in a patient with previous B-Lynch suture is described here.

A 24 year old woman G2P1L1 presented to the outpatient department at 21 weeks of gestation for antenatal registration. Her first pregnancy outcome was reviewed. It was a lower segment cesarean section done at 39 weeks of gestation in view of failure to progress in labor. She had been in labor for a total duration of 18 hours. Her operative notes were available and the procedure was done under spinal anesthesia. Male child of 2.6 kg had been delivered uneventfully, following which there was intraoperative hemorrhage due to uterine atony. Due to lack of response to medical management, uterine compression suture (B-Lynch) was taken with catgut no 0. This was accompanied by one unit blood transfusion, and no further procedure.
Following her antenatal registration, she had regular visits, and was compliant to antenatal care, which was uneventful. In view of fasting blood sugar of 99 mg % and postprandial blood sugar of 108 mg %, oral glucose tolerance test (100 mg) was performed which showed values of 100/209/164/81 mg % at zero hour (fasting), 1, 2 and 3 hours respectively. She was diagnosed as a case of gestational diabetes mellitus, and medical nutrition therapy and tablet metformin 500 mg once daily was started. Following this, sugars were controlled. Other antenatal evaluation was within normal limits.

In view of previous cesarean section and non-willingness for a vaginal trial, an elective cesarean section at 38 weeks of gestation was scheduled. Anticipating a recurrence of postpartum hemorrhage, adequate blood and blood products were kept ready. Lower segment cesarean section was performed under spinal anesthesia. Intraoperative there were no adhesions, and a healthy male child of 2.8 kg was delivered. Placenta and membranes were expelled spontaneously and completely. Oxytocin drip was started, uterine tone was maintained and there was no excessive hemorrhage. Uterus was eventrated and evidence of a previous compression suture was found in the form of a depression on the anterior and posterior surface of the uterus on either side.(figure 1) This scarring was very subtle. No other abnormalities were found. Postoperative recovery was uneventful and she was discharged on 5th postoperative day. Suture removal was done on day 14 and she chose barrier contraception. 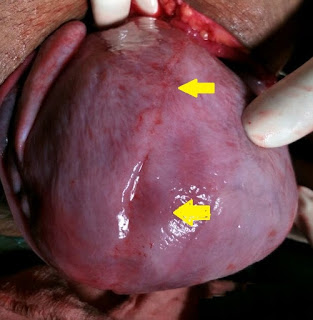 Figure 1. Intraoperative image. Yellow arrow is pointing to an area on the anterior uterine surface showing subtle indentation (suggestive of prior compression suture).

Recurrence of postpartum hemorrhage is well documented in medical literature. If postpartum hemorrhage occurs in a pregnancy, there is a 3-fold chance of recurrence of a similar event in the subsequent pregnancy. This was confirmed in a large population based cohort study by Oberg et al.[1] The risk is particularly higher if the woman is more than 35 years of age, has diabetes mellitus or has had two pregnancies with postpartum hemorrhage. In a similar study by Ford et al, the recurrence rate was pegged at around 15 %. They had opined that in every multiparous woman, a history of postpartum hemorrhage in previous pregnancy should be specifically sought for, and if present, should be advised to deliver only in a center with adequate blood banking facilities.[2]  In our case, the patient was not elderly, and it was only her second pregnancy. Though she was diagnosed with gestational diabetes mellitus, there was no recurrence of postpartum hemorrhage in the current pregnancy. Our patient had undergone prior conservative management of PPH with a uterine compression suture. She did not appear to have had any immediate complications. Uterine necrosis as a complication of uterine brace sutures, though rare is well documented.[3]
The first successful pregnancy outcome after a previous uterine compression suture was described as recently as 2009.[4] One early review had concluded that there were no adverse fertility outcomes following uterine compression sutures.[5] Gizzo et al conducted a review to assess the reproductive outcomes after the two main types of conservative uterine procedures for PPH; vessel embolization and compression sutures. It was noted that use of compression sutures resulted in a higher risk of subsequent need for cesarean section and the recurrence of PPH.[6]
In our case, the patient conceived around one and half years after the prior procedure, and it was a spontaneous conception. Hence, our case is in sync with available literature that fertility is not affected. Though the immediate advantages of uterine compression sutures are obvious, few case reports have reported long term adverse outcomes. Development of severe Asherman syndrome following B-Lynch suturing has been reported by Goojha et al.[7] In our case, patient had no complaints suggestive of hypomenorrhea or oligomenorrhea.  The most important finding in our case was that there were no adhesions, and only a minimal depression (scar) caused by compression identifying the prior B Lynch suture was seen. This is very much in contrast to the case reported by Begum J et al.[8] They had described a case where there were extensive adhesions, and there was uterine disfigurement.
Obstetric outcome in patient with prior uterine compression suture assumes importance because, it is well established that prior uterine vascular embolization increases the chances of repetition of similar procedure.[9] Hence, we are reporting this case, mainly to add to the existing literature regarding pregnancy outcomes with prior uterine compression sutures.

A case of pregnancy with prior B-lynch suture is presented. There was no recurrence of PPH. There were no intraoperative adhesions. While there was a subtle evidence of prior compression sutures, uterine contour was well-preserved.