Termination Of Pregnancy In A Case Of Giant Leiomyoma

Uterine fibroids are the most common tumors of the uterus.  They are benign growth and are also called as leiomyomas. Generally women with huge uterine fibroids are symptomatic. They present with menorrhagia, infertility or with pressure symptoms. Our patient  primarily sought medical attention for termination of pregnancy.

Leiomyoma is known to grow in response to hormone stimulation and their prevalence is more in the reproductive years, affecting 20 % to 30 % of women of reproductive age group.[1] A genetic component of the pathogenesis of uterine fibroids has been suggested. High-frequency mutations involving chromosomes 6, 7, 12, and 14 have been reported in uterine leiomyomas. It is not known, however, how these mutations initiate the cascade of events that eventually leads to the formation of a fibroid. Some theories suggest that intrinsic myometrial anomalies and endometrial injury play important roles.[2] The clinical presentation of symptomatic uterine leiomyomas may include irregular uterine bleeding, pelvic pain, and pressure symptoms, such as urinary frequency/ urgency or infertility. Our patient who came for termination of pregnancy was incidentally diagnosed with giant leiomyoma.

A 26 year old G2P1L1 married since 5 years presented to the OPD with 4 months of amenorrhea, 15 weeks by date for medical termination of pregnancy in view of failure of contraception and associated mass per abdomen. She noticed mass per abdomen 4 months ago which was insidious in onset and gradually increasing in size which she attributed to pregnancy. She had history of excessive menstrual flow with dysmenorrhea for 3-4 cycles prior to amenorrhea. She had no complaints of pain in abdomen, difficulty in micturition and defecation. No history of weight loss or loss of appetite. Her general and systemic examination were normal. On abdominal examination uterus was 28 to 30 weeks in size, fetal parts were not felt, and fetal heart sounds could not be heard. On speculum examination  anterior and posterior vaginal walls were bulging resulting in reduced vaginal cavity, cervix could not be seen. On vaginal examination a hard mass was felt in the anterior and posterior vagina obliterating the fornices, cervix was deviated to the right and seemed compressed between anterior and posterior vaginal wall. Bilateral fornices were full and non tender. Her blood investigations were normal. Ultrasound examination of the abdomen and pelvis revealed an intrauterine pregnancy of 14 weeks with cardiac activity present. Pregnancy was situated in the fundus above the fibroid. Uterus showed multiple fibroids. They were intramural, subserosal and submucosal in location, with largest fibroid being intramural measuring 10x12 cm with degenerative changes within it. Subserosal fibroid in the lower segment measured 7x5 cm, submucosal fibroid in the posterior uterine wall was 5x5cm in size. Corpus luteum was seen in the left ovary. Right ovary was normal.  Liver, spleen, and pancreas were normal. CECT scan that was performed after consent confirmed the above mentioned findings, there was compression of bilateral ureters causing hydronephrosis and hydroureter in the upper 1/3rd segment. Bladder neck was compressed due to pressure. There was no evidence of lymph node enlargement. Small bowel was displaced to one side and large bowel were normal, liver and gallbladder was normal. She and her relatives were counseled regarding the need for hysterotomy for 2nd trimester MTP due to location of fibroid in the lower segment and difficult vaginal delivery. They were also counseled regarding the need for an obstetric hysterectomy in the event of post abortal hemorrhage.  She and her husband did not want to continue pregnancy in view of failure of contraception  and opted for hysterotomy. Prior to hysterotomy ureteric stenting was done. Hysterotomy was done at 16 weeks of gestation.
On opening the abdomen uterus was 28 weeks in size, had multiple bosselations revealing multiple intramural fibroids of various sizes all over the lower segment of the uterus. Uterovesical fold was pulled up. Sharp dissection was done to separate the bladder from the lower uterine segment. Incision was taken over it to open the uterine cavity.  Fetus was delivered, placenta and membranes delivered completely. Uterus did not contract and retract resulting in atonic PPH. Oxytocics were given, bilateral uterine artery was ligated. She was transfused 4 units of packed cells due to excessive blood loss. As the bleeding could not be controlled a decision of hysterectomy was taken. Total abdominal hysterectomy was done. The lower uterine fibroids prevented application of clamps and few myomas coming in the way of the clamp were enucleated. After confirmation of hemostasis closure was done.  Weight of the uterus with fibroids was 1.8 kg. Postoperatively she required 2 more units of blood transfusion on Hb of 6 g%. She was stable postoperatively. She was discharged after stabilization. Histopathology report revealed leiomyoma of the uterus with no evidence of leiomyosarcoma. 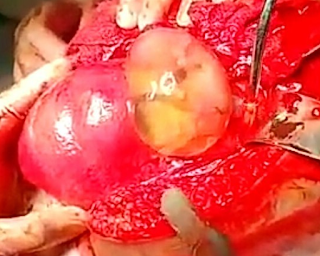 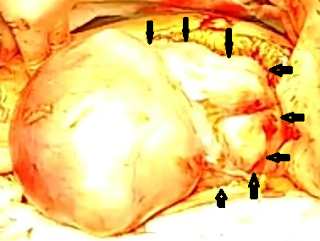 Figure 2. Giant leiomyoma occupying whole of pelvis. The arrows mark the extent of the fibroid extending to the lateral pelvic walls.

Early menarche, exposure to exogenous estrogen, obesity, and pregnancy usually influence fibroid growth.[1]
Large uterine leiomyomas can result in mechanical obstruction of the pelvic ureters, may cause renal impairment, with hydroureters and hydronephrosis. Prognosis in patients with obstruction is good with normal renal function tests. A previous study noted an incidence of 14.35% mechanical obstruction of ureters in patients with uterine fibroids. Most of these cases are recognized incidentally at ultrasonography.[3] Rarely, a fibroid may cause acute retention of urine by kinking of the urethra.[4]  Rare presentations of uterine leiomyoma include asymptomatic fibroids, associated polycythaemia, infertility, hypercalcaemia and hyperprolactinaemia.[5]
Surgical termination of pregnancy in the presence of multiple large uterine fibroids may be technically difficult resulting in reduced efficacy of the termination procedure.[6] Medical termination in a grossly distorted uterus due to fibroids is a very difficult case to manage. No literature provides guidelines regarding medical termination of pregnancy in 2nd trimester with a giant leiomyoma.
Treatment of fibroids can be divided into medical and surgical or both.
Surgery should be considered when there is multiple large fibroid like in our case.  Our patient with multiple enlarged fibroids had a increased risk of excessive bleeding and a risk of requiring hysterectomy at the time of the operation which was already discussed with the relatives. Therefore, blood should be cross matched preoperatively in every patient with fibroid uterus and the patient should consent for hysterectomy should the need arise during the procedure.[7]
With a large myoma in the lower segment of the uterus, myomectomy may be inevitable and there appears to be no absolute contraindication to myomectomy during cesarean section or hysterectomy. Whereas small fibroid < 2-3 cm or single fibroids, myomectomy during cesarean section or hysterotomy probably is not indicated especially when it is asymptomatic. With an adequate experience in myomectomy during cesarean section or hysterotomy and use of high dose oxytocin infusion, severe hemorrhage which is the most serious complication can be controlled.[8]
Cases of myomectomy during cesarean section that has been reported reveal few cases that were complicated by severe hemorrhage necessitating hysterectomy.[9] They concluded that the decision to perform hysterectomy during cesarean section should be made with caution because of risk of hemorrhage. On the other hand, other studies have showed a high incidence of hysterectomy for post-partum hemorrhage at delivery and puerperium period and post-partum sepsis in which the myoma was not removed.[10] So removal of the myoma during cesarean section seems to be logical if required.

Thus we conclude that management of giant leiomyoma should be individualized for every women. Surgical management should be done with caution keeping in mind the excessive blood loss and need for hysterectomy. More research is essential in patients undergoing termination of pregnancy having fibroid uterus.

Ganapati T, Chaudhari HK. Termination Of Pregnancy In A Case Of Giant Leiomyoma. JPGO 2018. Volume 5 No.8. Available from: http://www.jpgo.org/2018/08/termination-of-pregnancy-in-case-of.html