An interesting case of quadruplet pregnancy in a morbidly obese patient, with acute fatty liver of pregnancy (AFLP) at 33 weeks of gestation is presented. Early delivery and need for aggressive management which resulted in survival of the mother, and survival of one of the neonates is described. Maternal survival despite the severity of disseminated intravascular coagulation (DIC) is the highlight of the case. The first case of quadruplet pregnancy with acute fatty liver in pregnancy is being reported.

AFLP is a rare catastrophic disease, mainly occurring in the third trimester of pregnancy. It is a diagnosis of exclusion, with a rare incidence of 1 in 7000 to 1 in 16000 deliveries.[1] A strong index of suspicion can lead to timely diagnosis and management. Delay in diagnosis is frequently associated with high maternal and fetal morbidity and mortality. The estimated rate of maternal mortality is around 18 % and can reach upto 80 % if complicated with DIC. The neonatal mortality rate is also high, ranging from 7 % and almost 65 %, in few studies.[2]

A 24 year old woman G2A1 with spontaneously conceived quadruplet pregnancy presented to our tertiary care center at 33 weeks of gestation. The immediate reason for referral was hyperbilirubinemia, total bilirubin being 8.5 mg/ dl. She had complaints of generalised weakness since the last two weeks. There were no complaints of fever, diarrhea, vomiting, or pain in abdomen or itching in palms or soles. She was a diagnosed case of hypothyroidism and was on tablet levothyroxine 75 ug once a day. She was diagnosed with gestational hypertension 15 days prior for which she was started on tablet labetalol 100 mg twice a day. She did not have any other major medical or surgical illness.  On examination, icterus was present. She was conscious, well-oriented and afebrile. Her pulse was 80/ min, with a blood pressure of 90/ 60 mm Hg. Respiratory and cardiovascular systems were unremarkable. There was no pallor, but bilateral pedal edema was present. She was morbidly obese with a body mass index of 46.6 kg/ m2. There was abdominal wall edema with an overdistended uterus (figure 1) and multiple fetal parts felt.  Only one fetal heart sound was localized on Doppler, which was regular and 140 beats per minute. Per vaginal examination showed a closed internal os which was uneffaced. There were no premonitory symptoms or signs of impending eclampsia, bilateral deep tendon reflexes were normal and urine albumin was nil. She was admitted and investigated. 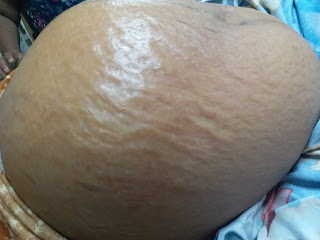 Viral markers were negative. Ultrasonography was performed which showed 4 live fetuses, the lightest being 1.4 kg and the heaviest being 2.1 kg. Ultrasonography also showed mild hydronephrosis with mild hydroureter of right side, grade I fatty liver, no free fluid in the abdomen. There was no splenomegaly. She was shifted to medical intensive care unit, an opinion of gastroenterologists was taken, which suggested the diagnosis to be AFLP. She fitted into six parameters as per the Swansea criteria for AFLP. Hence AFLP was considered higher as a possibility than preeclampsia related complications.  The investigations are summarised in Table 1. She was started on vitamin K injections, antibiotics, Injection dextrose and syrup lactulose to maintain glycemia and for prevention of encephalopathy. She was advised to go for earliest possible termination of pregnancy for maternal interest. Injectable steroids (betamethasone intramuscular 12 mg 24 hours apart) was given. In view of coagulation abnormality, requiring induction of labor, hematologists advised correction. Fresh frozen plasma at 15 ml/ kg, one unit cryoprecipitate per 10 kg of body weight were advised. It was advised to monitor coagulation profile for further need for correction. Decision of induction of labor was taken after correction of coagulation profile. Over the course of two days, she was transfused with 11 units of FFPs and 11 units of cryoprecipitate for the abnormal coagulation profile (Table 1).
Table 1. Investigation Results

Pre-induction ripening of cervix was done using dinoprostone gel, and a repeat dose was required 6 hours later. Labor was augmented using injection oxytocin 5 IU in 500 ml ringer lactate. 1st, 2nd, 3rd babies were delivered using vacuum in view of maternal exhaustion and the 4th baby was delivered by assisted breech delivery. Out of the four neonates, 3 were male and one was a female of which one male fetus was a still birth (1.2 kg). Among the three born alive, two required intubation, respiratory support and inotropic support, while one did not require any significant support. The baby weights of the latter 3 were 1.4 kg, 1.4 kg and 1.8 kg respectively. The two neonates requiring inotropic support succumbed within one week of ICU stay. One neonate was discharged on day 21 of life with an otherwise normal growth pattern. 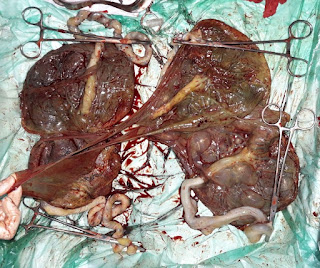 All measures were taken to prevent postpartum haemorrhage (Injection oxytocin drip and tablet misoprotol 800 ug kept per rectally). Correction of coagulation status was continued antepartum, intrapartum and postpartum depending on coagulation profile results every 12 hours. She required transfusion that comprised of 66 units of FFPs, 40 units of   cryoprecipitates, 23 random donor platelets units and 7 units of packed red cell over 7 days.Though she had tremors (hepatic flaps) suggestive of of grade I hepatic encephalopathy, she was oriented to place and person. Worsening of grade of hepatic encephalopathy was prevented by monitoring of blood sugar values, maintaining a high carbohydrate diet, injection dextrose 5 times a day and syrup lactulose. High WBC counts necessitated stepping up antibiotics to imipenem 250 mg once a day and vancomycin once a day. Gradually, bilirubin reduced and coagulation profile improved. There were no major postpartum complications. On day 21 postdelivery, she chose to get discharged, against medical advice.
Discussion

It is important to diagnose cause of jaundice in pregnancy accurately. The differential diagnosis includes HELLP Syndrome, cholestasis of pregnancy, acute fatty liver of pregnancy and acute viral hepatitis. AFLP is a diagnosis of exclusion.  Although the etiology of AFLP is not known, there is predilection for nulliparous women, multiple gestation, and pregnancy with male fetus.[2] It is believed to be due to mitochondrial dysfunction in long chain fatty acid oxidation, leading to hepatocyte accumulation of toxic metabolites. Women with AFLP have long chain 3 hydroxyacyl conenzyme A dehydrogense (LCHAD) enzyme deficiency.[3]  Liver biopsy is diagnostic of AFLP but cannot be done in most of the cases because of DIC. However, it can be strongly suspected when patient fulfils 6 of the following clinical and laboratory criteria. These are vomiting, polydypsia/ polyuria, abdominal pain, encephalopathy, high bilirubin (>15 µmol/L), hypoglycaemia (< 72 mg/L), high uric acid (> 340 µmol/L), leucocytosis (> 11x106/cu mm), ascites or echogenic liver on ultrasound, elevated SGOT/SGPT (> 42 µmol/ L), high ammonia (> 47), serum creatinine (> 150 µmol/L), coagulation abnormality (PT>14 sec), microvesicular steatosis on liver biopsy.  These are collectively called as Swansea criteria.[4] Though useful, it has not been fully validated. Our patient had complaint of abdominal pain with serum bilirubin of 20 umol/L. She had recurrent episodes of hypoglycaemia, persistently raised WBC count > 20,000/ cmm, SGOT 97 µmol/L and SGPT 195 µmol/L, serum creatinine increased to 4 µmol/L,  and PT was 35 seconds against control of 13 and INR was 2.5. Her USG abdomen was suggestive of grade I fatty liver. She fulfilled 8 of the Swansea criteria and hence diagnosis of AFLP was made. Though HELLP syndrome is more frequently encountered, there is hemolysis with elevated liver enzymes and thrombocytopenia. Thrombocytopenia occurred late in our patient, secondary to DIC.  AFLP can be distinguished from cholestasis of pregnancy in which patient has complaint of itching in palm and sole with raised alkaline phosphatase and bile acids. Management of AFLP comprise of rapid delivery of fetus with supportive care and correction of DIC. In most of the cases liver dysfunction and DIC starts improving post- delivery. High mortality has been reported due to cerebral edema, gastro intestinal hemorrhage, renal failure, coagulopathy, and sepsis. Intensive management of patients has reduced the mortality significantly.[5] Recent studies and cases do report a higher survival of patients with AFLP and DIC. A retrospective study by Dwivedi et al, which included 7 cases of AFLP, 4 developed DIC. However, there was only one mortality. There were three twin gestations. There was a male predilection too.[6]  In our case also this was seen with 3 males and one female fetus. Another case of multiple gestation with AFLP with complicated DIC but survival after needing intensive care support has also been described by Philip et al.[7] Only one case of triplet gestation with AFLP has been described.[8] Though multiple gestation is surely associated with AFLP, cases of higher order (quadruplets) were not found in contemporary literature, despite a diligent search. Similar to these cases described above, maternal survival despite the severity of hyperbilirubinemia and DIC is the highlight of this case.

The Swansea criteria can help in raising suspicion of AFLP. DIC is a major complication of AFLP. With good intensive care support and multi-disciplinary approach, maternal survival is possible.