Vulvar papillary hidradenoma arises from specialized anogenital apocrine glands in and around the intralabial sulcus. These are benign lesions, which present as slow growing, circumscribed cystic masses especially in reproductive age. Here we discuss a case of papillary hidradenoma of vulva.

Vulvar lesions are classified as per the tissue of origin. These can be hidradenoma, syringoma, condyloma acuminatum and acrochordon which are of epithelial origin; leiomyoma, lipoma, fibroma, neurofibroma and granular cell tumor which are of mesenchymal origin; and hemangioma and lymphangioma which are of vascular origin. Glandular blockage causes Bartholin’s cysts. Rare lesions like endometriosis can also occur.  It is important to distinguish a benign lesion like hidradenoma from a rare hidradenocarcinoma or even an aggressive malignancy like merkel cell cancers for appropriate treatment, follow up and counseling of the patient.[1]

A 35 year old lady presented to the gynecology outpatient with complaints of a painless, gradually enlarging swelling in the vulvar region since 2 months. It was not associated with any discharge or skin changes. There was no history of any urinary complaints.  Clinical examination revealed a 2 x 2 x 3 cm para clitoral cystic non-tender swelling with smooth surface (figure 1). 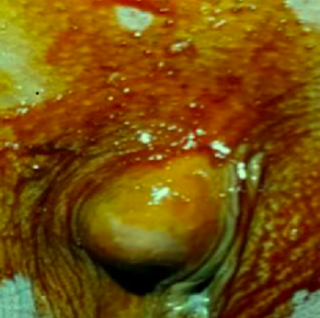 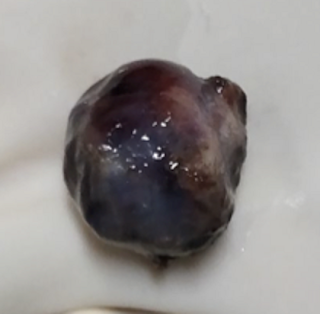 Figure 2. Image of excised mass.
Provisional diagnosis of lipoma was made and she was posted for excision of the cyst. Preoperative investigations including pap smear were normal except that she was incidentally found to be VDRL positive with a titre of 1: 16. After completing three doses of benzathine penicillin 2.4 MU, each dose given one week apart, excision of the para clitoral cyst was done under general anesthesia. A subdermal hemorrhagic cyst of 2 x 2 x 3 cm was separated by sharp and blunt dissection and removed. (figure 2) The incision was closed by polyglactin no 1-0. She was discharged on oral antibiotic and anti-inflammatory medication, local antiseptic cream and was adviced personal hygiene. Histopathological examination revealed a diagnosis of hidradenoma papilliferum, a benign tumor of apocrine sweat glands. (figure 3) At follow up, the wound was well healed. She was explained the benign nature of the disease and a rare chance of recurrence. 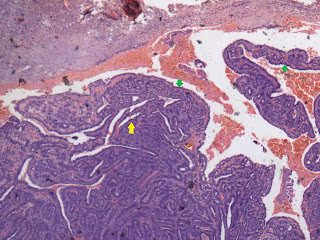 The term hidradenoma denotes tumor of the sweat gland. Papillary hidradenoma is a rare, benign, cystic, sweat gland tumor. This has originally been reported in adult Caucasian women. It arises from the anogenital glands, with apocrine differentiation. Estrogen and progesterone receptors are present in anogenital sweat glands and are markers to differentiate these glands from other usual sweat glands.[2] Due to estrogen and progesterone receptor positivity, it is believed that hormonal stimulation may play a role in the pathogenesis of hidradenomas in women.[2,3] Our patient did not have any hormonal abnormality.
Androgen receptor positivity in some papillary hidradenomas is documented in luminal cells. This bears similarity with breast proliferative disorders. Hence it is considered that hidradenomas grow in specialized anogenital glands around the intralabial sulcus, which is located in the mammary line. These tumors are mostly single, small in size and do not cause symptoms.  Most of the lesions occur in the labia majora, appearing as a raised mass. It usually takes the color of the overlying skin. The incidence of multiple lesions is reported to be around 5%.[4] Our patient had a swelling with typical description, as described in literature and had only a single swelling.
Ectopic papillary hidradenoma is slightly more frequent in women, and can be seen in any age group.[3]  Ectopic papillary hidradenoma can occur in any location including head and neck region, extremities, external ear, upper eyelid and chest wall. Differential diagnoses includes those conditions mentioned above but rarely, a malignancy.[1] Our patient did not have any other similar swellings.

Vazmitel et al reported a case of ductal carcinoma in-situ arising in papillary hidradenoma, with human papilloma virus 16 association.[5] Kazakov et al in their study of 18 cases found human papilloma viral particles in four cases. Some cases had multiple strains.[6] However, a causative association has not been established. In our patient, HPV was not tested. For treatment, simple surgical excision is adequate. When there is coexisting Bartholin’s cyst, wide surgical excision may be considered. A careful follow-up is recommended since the recurrence rate is not clearly known.[4] There are no reliable prognostic markers for hidradenomas at present.[7]

Papillary hidradenoma is a benign slow growing anogenital tumor. It should be included in the differential diagnosis of a vulval swelling. Surgical excision and regular follow-up are recommended.