Submucosal Fibroid: A Diagnostic And Management Challenge In A Case Of Missed Abortion

We present an interesting case of suspected uterine perforation and omental prolapse into the vagina during surgical evacuation of missed abortion. The patient required two step surgical procedures to remove a submucosal fibroid that had undergone ischemic necrosis and partial expulsion. The case was a surgical challenge due to high chance of uterine injury, inversion and septicemia. It also highlights imaging errors.

A 25 year old G3P2L2SA1 was referred to our institute on the 6th post operative day after curettage with suspected uterine perforation and omental prolapse. She had 2 full term normal deliveries in the past. She had undergone dilatation evacuation with Cu-T insertion for missed abortion of 8 weeks and 6 days pregnancy. On the 4th post evacuation day, she complained of abdominal pain, fever and multiple episodes of vomiting. Pelvic ultrasonography (USG) from the private hospital was suggestive of bulky uterus with rent in the left posterolateral wall at the junction of the body of the uterus and cervix with prolapse of omentum into the uterine cavity and vagina. She was referred to our hospital for further management with this report.

On examination her general condition was stable. There was mild pallor. She was afebrile, with pulse rate of 86/ minute, and blood pressure of 110/70 mm of Hg. Systemic examination was unremarkable. Abdomen was soft with no guarding, rigidity or tenderness. There was no abdominal distension and peristaltic sounds were normal. There was suprapubic fullness. On speculum examination, a necrotic polypoidal structure was seen through the cervical canal (figure 1)  In addition a shaggy necrotic foul smelling pale pinkish flimsy tissue was seen from the left lateral surface between the polyp and the cervical wall. Cu-T was found in the vagina.  On bimanual examination, uterus was 12 weeks in size, anteverted, with a firm polypoidal structure felt in the cervical canal. Cervical swab was collected for culture and antibiotic sensitivity. Detached part of the shaggy tissue was sent for histopathological examination. No forniceal fullness or tenderness was appreciated. Foley’s catheterization was done and 200 ml of clear urine was drained out. USG was repeated at our institute. It was suggestive of a 2 cm rent within the uterus in the left posterior lateral aspect with multiple air specs within the uterine cavity. CT Scan was suggestive of multiple air specs and heterogeneous content in the uterine cavity. The suspicious rent in the wall of uterus was not well appreciated on CT scan.  Her laboratory reports were unremarkable. On considering her abdominal complaints and after confirming availability of blood and products, exploratory laparotomy was performed under antibiotic cover. Intraoperatively, peritoneal cavity was clean without any visceral injury. Uterus was bulky with variegated consistency. As the exploratory laparotomy was negative she was given a lithotomy position and a speculum examination was performed. The cervical os was open and a fibroid polyp was hanging out, uterus was 14 weeks in size. An additional intracavitary fibroid was felt. Uterine sound could not be passed easily around it. Fibroid polyp was removed and sent for histopathological examination. She tolerated the procedure and anesthesia well. Two units of packed cells were transfused perioperatively. Enterococcus was grown on culture and she was treated with intravenous linezolid.

In further evaluation, USG was suggestive of a large fibroid occupying the endometrial cavity. MRI diagnosed the lesion as retained products of conception. After completion of  linezolid course, polypectomy with curettage if required was planned. A large Fibroid, ovoid in shape about 5x7 cm (figure 2) that had extruded out of the cervical canal was excised and sent for histopathological examination. Stump was checked for bleeding. Uterine tamponade was done with Foley’s catheter as the stump kept oozing despite ligatures (figure 3). She tolerated the procedure well. The Foley catheter was removed after 24 hours. Histopathological report confirmed the uterine mass as leiomyoma with hemorrhagic infarction. She was discharged uneventfully with advice about contraception. 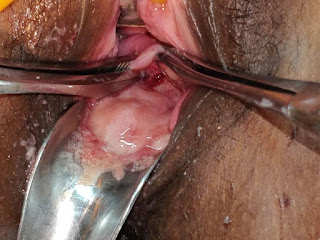 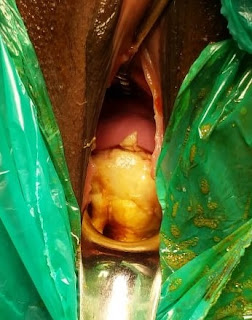 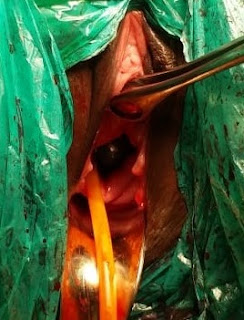 On retrospection, our patient did not give any history of dysmenorrhea, abnormal uterine bleeding attributed to fibroids. Detailed history would probably have avoided the infection and the unnecessary laparotomy. Laparoscopy would have been a preferred alternative to laparotomy but it was not available during the emergency hours.
Submucosal fibroids cause numerous fetal complications in addition to fibroid enlargement and degeneration.[1,2,3] Surgical evacuation poses a challenge in cases of missed abortion. Omental extrusion with perforation of uterus is a known complication and depending on presence or absence of bowel herniation, ischemia or perforating injury the morbidity and mortality increases.[4]
Spontaneous expulsion of a degenerated submucosal fibroid is known in post partum period.[3] However, our patient did not complain of pain indicating extrusion; hence we were misled to trust the imaging reports. If the bleeding after polypectomy is not torrential, tamponade with catheter balloon saves unnecessary interventions like embolization or hysterectomy.[5]
With infection noted at initial presentation, excision of intrauterine fibroid would have caused severe bleeding needing hysterectomy or interventional radiological procedure. So we opted for a two-step procedure. Omentum like degenerated fibroid caused concern. Erroneous USG, CT scan and MRI reports cost the patient an unnecessary laparotomy.