Paraovarian cysts contribute to about 10 % of all adnexal masses. They are usually benign and small cysts. Very rarely, they can grow up to large sizes.  Here we present a case of a 21 year old woman with a paraovarian cyst, reaching up to the xiphisternum, about 36 weeks in size, that was managed laparoscopically.

The lining of the peritoneal mesothelium or remnants of mesonephric or paramesonephric tissue are the possible origin of the paraovarian cysts.[1] Usually, microscopy shows a single layer of columnar or flattened cells. They are fluid filled sacs of usually small size arising beside the ovary but never attached to the ovary. Very few cases have been described in the literature about huge paraovarian cysts. Some paraovarian cysts, owing to its large size may undergo torsion or rupture as a complication.[2] Here we present an unusual case of a paraovarian cyst which grew up to 36 weeks size and was excised laparoscopically.

A 21 year old unmarried woman presented to the outpatient department with a slowly increasing abdominal swelling since about one year. She was unaware of any abnormal pathology and was undergoing weight loss measures for the same. Abdominal swelling was associated with some non-specific symptoms like pain in the right hypochodrium and occasional dysmenorrhea. She had no history of colicky pain, vomiting or other gastric disturbances. There was no weight loss or weakness. Menstrual cycles were regular, with dysmenorrhea.
Systemic examination was normal. Abdominal examination showed large tense, smooth cystic mass arising from the pelvis reaching up to the xiphisternum (figure 1). It was tense, non-mobile and non-tender. Ultrasonography and MRI confirmed the findings of a large cystic swelling arising from pelvis reaching upto the xiphisternum occupying the whole abdomen. Ovaries were visualized and were normal in size and shape. Uterus was also normal in size and shape. Preoperative investigations and tumor markers (CA-125 value and beta-hCG value) were normal. A laparoscopic approach was chosen due to the benign nature of the lesion. 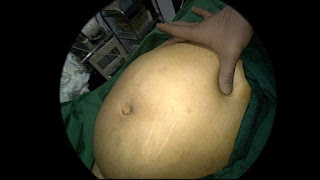 Figure 1. Preoperative image showing the size of the cyst . 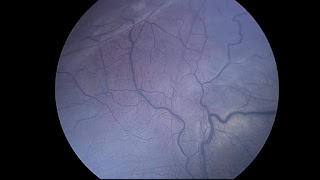 Figure 2. Image showing cyst with clear fluid.
Through a supraumbilical approach, a 10 mm trocar was directly inserted into the peritoneal cavity. The cyst showed clear fluid (Figure 2). The trocar and cannula were then inserted into the cyst, and a suction device was used to drain the cyst fluid.  The volume was around 2.5 liters (figure 3). 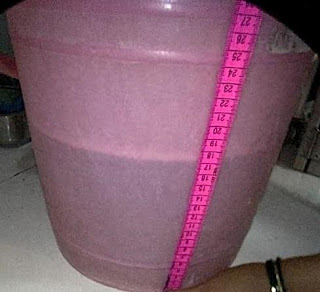 Figure 3. Image depicting amount of fluid drained.
After draining, the suction was removed and laparoscope was re-inserted, and lateral ports were placed. The drained cyst was easily visualized and its origin was traced to the paraovarian region separate from the ovary (figure 4). The cyst wall was excised and removed from the lateral port. Uterus was visualized and was in normal size. Both ovaries were seen normal. Unilateral salpingectomy had to be done as the tube was overtly stretched and elongated (figure 5). There was significant and appreciable change in the external contour of the abdomen (figure 6). The specimen obtained (figure 7) was sent for histopathological examination and it confirmed a paraovarian cyst. Postoperative course was uneventful. 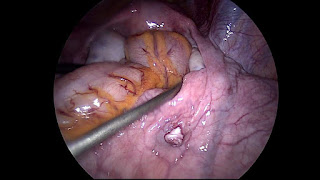 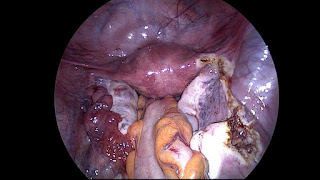 Figure 5. Image showing the view of pelvis after cystectomy. 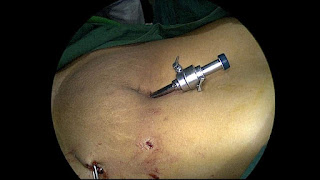 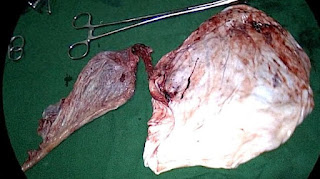 Most paraovarian cysts are asymptomatic and are incidental findings, but rarely they give rise to clinical symptoms due to their enlargement or torsion. Hydronephrosis is also a complication of large cysts which is caused by the pressure on the ureters.[3] Our patient did not have any urinary complaints.
These cysts can be examined by abdominal palpation, vaginal bimanual examination or rectal examination. Ultrasound is most commonly used to diagnose the mass and its location. But rarely in such large masses the point of origin cannot be determined. Hence to clarify the diagnosis, sometimes computerized tomography or MRI are used. MRI is preferred over CT as to prevent radiation to the ovaries especially in a young girl. In our patient, since the cyst was visualized separately from both the ovaries, it was reasonably ascertained that it is of paraovarian origin.
Traditionally, midline vertical incision is used to remove such large cysts. However, we chose a laparoscopic route since there has been positive experience with minimally invasive techniques in abdominal procedures.[4] Due to direct visualization, the laparoscopic differentiation of paraovarian cysts from that of ovarian cysts is also very easy.  Oophrectomy or salpingectomy may sometimes be required.[5,6] In our case, salpingectomy was required.