A Case Of Severe Restrictive Lung Disease In Pregnancy

Dyspnea in a pregnant woman may be physiological or pathological. During pregnancy, pulmonary functional reserve, including functional residual capacity and total lung capacity, are reduced; while oxygen consumption by the placenta, fetus, and maternal organs is raised.[1] Any restriction in ventilation during pregnancy has serious consequences for both the mother and fetus. Here, we present a case of right lung collapse due to tuberculous sequelae in a pregnant woman and its management.

A 33 year old primigravida, presented at 32 weeks of gestation with complaints of breathlessness and orthopnea. She had tuberculous pleural effusion at 11 years of age, and had completed 6 months of treatment. Thereafter, she had been asymptomatic. She conceived spontaneously two years after marriage and registered at a private hospital. She had an uneventful pregnancy when she started to experience breathlessness, prior to presentation in our hospital.  On examination, there was tachypnea (30 per minute), and respiratory system examination showed asymmetry between the chest walls, with reduced air entry on the right side. Abdominal examination showed uterus of 32 weeks gestation with live fetus in cephalic presentation and vaginal examination showed her not to be in labor. Chest X ray (prior to presentation) showed right middle zone/ lower zone homogenous opacity with tracheal shift to right and left lower zone haziness (figure 1). 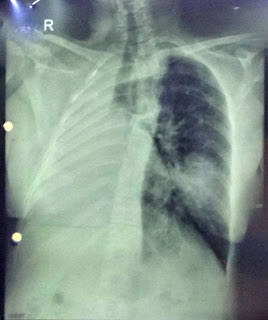 In view of respiratory failure, she was admitted in the respiratory critical care unit, and was started on oxygen, bronchodilators & injectable steroids. Her vital parameters were monitored. Subsequently she improved and oxygen requirement reduced. Steroids were tapered. Sputum showed no mycobacterial growth. Gene Xpert was negative. She was maintained on inhalational broncholidator (Formeterol 6 mg and budesonide 400 mcg twice a day via rotahaler) and salbutamol 200 mcg when needed. Throat swab was sent and respiratory infection (H1N1, bacterial growth) was ruled out. Throughout this period of admission, she maintained good fetal kick count and there were no obstetric complaints.  One week after the above management, chest X ray was repeated which showed a similar picture. In view of her stable condition, she was discharged in 6 days, and advised to follow up in antenatal outpatient department. She was compliant and then was admitted close to term for observation and a labor plan. It was imperative to avoid the stress of labor on the already decompensated lung which could add to further complications. Though pulmonary function tests are not normally done, in view of severe nature of the disease, the decision to perform the same was taken by the chest physician. This revealed a severe restriction, and based on this report, the chest physicians advised that vaginal birth should be avoided. Anesthesiologists were consulted for the same, and they opined that for cesarean birth, regional anesthesia will be preferred. Apart from mild mitral regurgitation and mild tricuspid regurgitation, cardiac echocardiography was largely normal and cardiologist opined there is a moderate risk for cardiac failure in the event of an operative procedure like LSCS. In the event of failure of regional anesthesia, and presence of significant lung collapse, and possible difficult intubation, a prophylactic tracheostomy was considered as one of the options. However, ENT surgeons opined that this be done only on an emergency basis, and not electively. Hence, a combined multidisciplinary opinion of cesarean section was confirmed. For optimization of respiratory status, she was advised spirometry.
She went into labor at 37 weeks of gestation, and a high dependency unit was made available for her.  Epidural analgesia with spinal anaesthesia was given, and LSCS was performed delivering a live term baby with a good Apgar score. Usual antibiotics (ceftriaxone, gentamycin, metronidazole) used. Initial postoperative period in ICU was uneventful, orals were started and she was ambulated. Around 36 hours post-procedure, she developed breathlessness and cough with one episode of haemoptysis. Chest physicians reviewed and apart from continuing inhalational bronchodilators, injectable steroids (injection hydrocortisone 100 mg) was added. Injection tranexamic acid 500 mg four times a day and ethamsylate 500 mg intravenous three times a day were added. Investigations (arterial blood gases, electrocardiography, platelet count, coagulation profile, sputum AFB) were within normal limits. ENT specialists ruled out an upper airway cause of haemoptysis. Sputum culture grew Pseudomonas species sensitive to amikacin/ cefepime/ ceftazidine/ ceftriaxone/ cefepime/ ciprofloxacin/ levofloxacin/ piperacillin tazobactam. High resolution CT scan was done which showed post- infective sequelae, with ground glass consolidation in superior segment of left lower lobe and right lung collapse (figure 2). 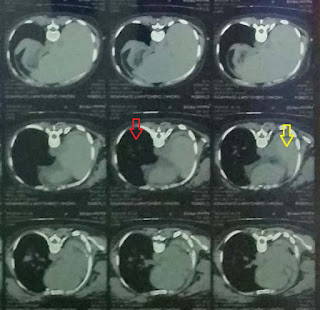 She was transferred to medical ward and was started on injection piperacillin tazobactam 4.5 gm intravenous twice a day, tablet azithromycin 500 mg once a day and injection furosemide 20 mg twice along with the rest of the prior medications.
With these medications, she improved symptomatically, and never required any mechanical ventilation. In view of coexisting non-productive cough also, tablet oseltamivir 75 mg twice a day was started, and throat swab was sent for H1N1 (which turned out to be negative). A week after the procedure, cardiologists reviewed and advised reassessment after 6 weeks. She was shifted back to obstetric postnatal ward on day 9 of procedure. She was monitored for one more week and due to constant improvement, she was discharged at 16th postoperative day, with advice for regular follow up. She was counseled about various options of contraception, and she chose Injection depot medroxyprogesterone acetate.

Tuberculosis continues to be a major health problem in India. More than 210 cases of tuberculosis per 1,00,000 people was the estimate for 2016, according to the WHO predictions for India. Successful treatment is based on clearance of tuberculosis bacilli from the involved site or completion of the drug dose but does not assess structural and functional effects on the involved organ.[2] Our patient had a long standing structural effect, and problems arose during pregnancy.  TB can give rise to long term pulmonary complications such as fibrosis, bronchiectasis, chronic pulmonary aspergillosis, airway stenosis and chronic obstructive pulmonary disease. It is believed to associated with cancer also.[3]

Singla et al reported on 51 MDR-TB patients who were successfully treated. Of them, 78% had persistent respiratory symptoms. Almost all had residual radiological sequelae and ventilatory defects. Two-thirds showed a mixed type of ventilatory abnormality and 19 % had pure restriction and 11 % had pure obstruction.[4] Hndizo et al and Amaral et al have also reported similar outcomes.[5,6] Like the majority, our patient had radiological sequelae, ventilatory defects and a mixed ventilatory abnormality, confirmed on pulmonary function tests also.
Ventilator management in woman carrying a pregnancy, with pre-existing respiratory difficulty poses a dilemma. Endotracheal intubation carries more than normal risk, and failed intubation is many times more common. The altered respiratory dynamics (reduced functional residual capacity and increased oxygen consumption) cause rapid oxygen desaturation during apnea or hypoventilation. Non-invasive ventilation is ideal for short-term ventilatory support, and avoids the potential complications of intubation.[7] In our patient also, maximum attempts were made to avoid intubation. Stress of labor would have precipitated episodes of respiratory difficulty and hence was avoided. Regional anesthesia was used and high flow oxygen was used, thereby successfully avoiding intubation at any time.

Interventions such as inhaled nitric oxide and prone positioning in pregnancy have also been used successfully. Nair et al have reported the successful use of extracorporeal life-support for ARDS in pregnant patients with good outcomes, especially during the H1N1 epidemic in 2009.[8]
Delivery of the fetus in a patient with respiratory failure will not cause a signiﬁcant beneﬁt to the mother, except relief from mechanical discomfort. However, Tomlinson et al in their case series have opined that induction of labor in a respiratory-status-compromised mother is more likely to cause harm than benefits.[9] In the study by Jenkins et al also, a higher proportion of patients underwent a cesarean section.[10] This is similar to our decision to prefer a cesarean section, based on the opinion of the pulmonologists, and supported by a multi-discipinary discussion of specialists.  Although cesarean section may allow more rapid delivery, the increased physiological stress, and slightly higher risk of higher mortality should be taken into account. ICU arrangements must be made available in the event of sudden maternal or fetal deterioration.[10]  As expected, our patient also needed ICU stay for six days. However, the recovery and overall outcome was good, as described.

Sequelae of pulmonary tuberculosis can become symptomatic during pregnancy, after a long time of quiescence. Severe restriction of pulmonary function may necessitate pulmonary function tests in pregnancy. The risks of performing a cesarean section should be balanced against the benefits obtained by avoidance of exertion during labor. Successful management of  cases of severe restrictive lung disease with good feto-maternal outcome is possible by following a multi-disciplinary approach.