Intraplacental Hematoma As A Cause of Fetal Insufficiency

A twenty three year old G2P1L1 with 32 weeks gestation was referred to our hospital with ultrasonography suggestive of intaplacental bleeding. She was registered and had regular followup elsewhere. Her previous pregnancy was uncomplicated and she had a full term delivery. Ultrasonography of 28 weeks was suggestive of intraplacental hematoma of 7.4 x 2.1 x 2.9 cm, and the placenta was located anterior and fundal. One week after this, there was an increase in size of the intraplacental bleed to 5.7 x 6 x 2.5 cm, after which she was referred to our hospital. She continued to perceive good fetal movements. Meanwhile she was given progesterone support and steroid dose was completed. At arrival in our hospital, her pulse rate was 88/ minute and blood pressure was 120/80 mm Hg. Uterine height was 32 weeks with longitudinal lie with cephalic presentation and fetal hearts were regular, at 140 beats per minute.
Hemoglobin was 10.5 gm %, platelet count was 2,80,000/cu mm, INR was 0.89 and fibrinogen was 293 mg %. Liver and renal function test reports were normal. Urine albumin was nil. Ultrasonography at our center was suggestive of single live intrauterine gestation of 30 weeks with estimated fetal weight of 1379 grams with adequate liquor, with asymmetric IUGR with intraplacental hematoma of 9 x 8 x 3 cm. Fetal doppler was suggestive of feto-placental insufficiency with raised umbilical artery S/D ratio of 4, fetal middle cerebral artery and pulsatility index of 1.5 (normal). 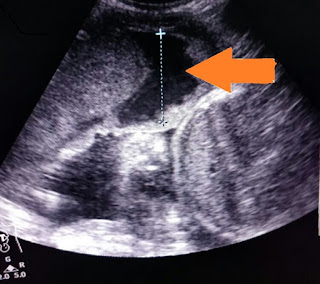 Figure 1. Ultrasonography showing hematoma.
A decision of induction of labor with prostaglandin E2 gel was taken in view of increasing size of intraplacental hematoma with IUGR and feto-placental insufficiency. She required cesarean section due to failure of induction, and delivered a female child of 1566 gram with Apgar score of 8/10. Intraoperatively, liqor was clear. Neonate was transferred to NICU and was later discharged after a two week stay.  Placenta showed a defect of 6 x 8 cm well organized blood clot with calcifications (figure 2). The postoperative course was uneventful and she was discharged on day 6. 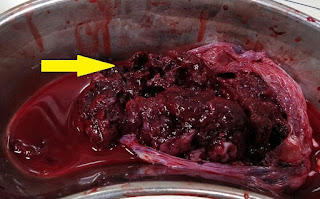