Cesarean sections are to be performed by a lower uterine segment. Altered anatomy due to the presence of uterine malformations and that too when they are undiagnosed can be tricky. These may result in inadvertant surgical complications One such case of a cesarean section in an undetected case of uterine malformation who luckily did not face undue surgical trauma is being presented here.

A 20 year old gravida 3 para 2 living 1 IUFD1 came at 35 weeks and 3 days of gestation with complaints of pain in abdomen. Her previous pregnancies had been cesarean sections, details of which were not known precisely. She also reported that in her first pregnancy she was told that there was rupture of the uterus, resulting in fetal demise. The operative notes were not available, and whether the scar was of a lower segment or upper segment could not be ascertained. The delivery occurred at term. Her second pregnancy was a cesarean section which was done in a tertiary care hospital. She had been taken for an elective cesarean section, in view of uncertainty of the details of the first pregnancy. She had not been willing for a vaginal birth after cesarean in any case, because of prior fetal demise. There was no significant medical or surgical illness history.  She had registered with our center in the first trimester, and was followed up regularly. However, no precise decision regarding her obstetric management could be taken because both prior operative notes were not available. It was decided to perform elective cesarean section at 37 weeks of gestation. However, she presented at 35 weeks in preterm labor.
On admission she was having no tachycardia, blood pressure was 110/ 80 mm Hg, cardiovascular and respiratory systems were normal. Uterus was 36 weeks in size deviated to the right side with activity of two contractions in 10 minutes. There was no scar tenderness. There was a well healed Pfannensteil scar.  Cervical os was 1 centimeter dilated, 40% effaced, vertex was at -3 station, membranes were intact and show was present. Pre-operative investigations were done and she was taken up for emergency lower segment cesarean section. No attempt of tocolysis was made as she had given a history of unconfirmed uterine rupture. She had consented for placement of a post placental intrauterine contraceptive device (IUCD).
Intraoperatively, abdomen was opened by midline vertical incision and there were no peritoneal adhesions. Doyens’ retractor was introduced and uterus was easily visualized. Loose uterovesical fold of peritoneum was dissected out and Doyens’ retractor was advanced to retract the urinary bladder. A transverse incision was taken on what was presumed to be the lower uterine segment. Female child of 2.440 kg was delivered and placenta was expelled spontaneously.  Upon attempting to mop the uterine cavity, it was realized that the uterus is bicornuate in nature, with small, inconspicuous left horn that was not seen prior to the delivery (figure 1). 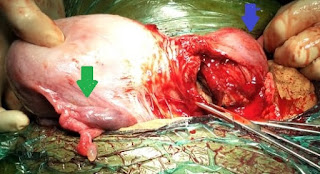 Only after completely exteriorizing the uterus and visualizing the entire uterine contour, the bicornuate status was confirmed after the adnexal structure of the left side came into view (figure 2). 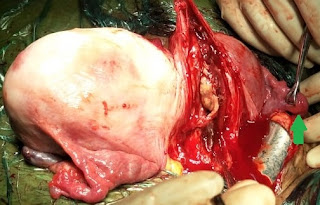 The incision was found to be extending between the 2 horns almost vertically into the loose fold of the peritoneum that was part of the vesico-rectal fold. The non gravid horn’s medial wall was not injured or opened up and its cavity was also not seen. As the cavity was not opened it was not possible to see where the two cavities communicated. The lower end of the non gravid horn did not open in the incised lower segment of the gravid horn. The cervix was traced from the right horn down and the uterine incision was approximated, closed and hemostasis was achieved. There were no problems in suturing or achieving hemostasis. The almost vertical nature of the incision (but not classical section), though inadvertent, was clearly evident after the closure of the uterine incision (figure 3). The non gravid left horn was normal in size, soft to touch and did not have an obvious hematometra. Her cervix was single as felt during the digital examination that was done on admission  There was no sign of endometriosis on the left tube or the ovary or on the uterosacrals which were inspected after closing the uterus. Both horns were inspected to see for any evidence of previous scar of cesarean section and uterine rupture but no apparent scars of either could be identified. Postoperative recovery was uneventful and she was discharged on day 5 of her surgery. 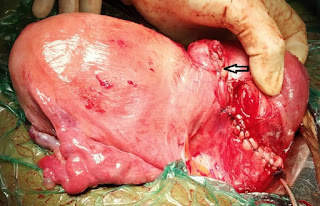 Figure 3. Intraoperative image after closure of the uterus. Arrow shows the extension of the incision in the anterior part of the vesico-rectal fold of the peritoneum.

Even though a consent for intrauterine postplacental IUCD insertion had been taken, but IUCD could not be inserted as only the cavity of the pregnant horn was accessible and that of the non pregnant horn was not accessible as that cavity was not opened. She was informed about this and the husband decided to undergo a vasectomy subsequently. She is scheduled for a hysterosalpingography 3 months after the cesarean section.

When compared to a normal population, women with uterine malformations have a higher risk of preterm births, cesarean sections and poor neonatal outcomes.[1] Our patient needed a preterm cesarean section but had good neonatal outcome. While considering this patient’s first pregnancy outcome, it appeared to be a spontaneous uterine rupture in an unscarred bicornuate uterus. Such cases have been reported by Nitzsche et al and Ashelby et al.[2,3]
Case reports wherein such patients underwent a vaginal delivery successfully, but presented with a ruptured rudimentary horn postdelivery have also been described.[4] Our patient was not given a vaginal delivery due to previous two scars on the uterus. Due to the lack of availability of papers, we could not ascertain any particular detail about the first pregnancy outcome.
In her second pregnancy, she underwent a planned cesarean section. Though no specific guidelines exist on the matter, most case series which describe pregnancy outcome after a uterine rupture, uneventful cesarean sections appear to be the most common mode of delivery.[5-7]
Regarding the pregnancy outcome of the index pregnancy, which has been described in this report, it is noted that operative details and difficulties in specific cases of uterine malformations have not been described.
In this case, the surgeon uterine malformation was undiagnosed despite her having undergone a previous surgery for rupture uterus. Though this patient was registered in the first trimester, and ultrasonography had been done then, it was not able to pick up the uterine abnormality. Chan et al, in their large systematic review had concluded that two-dimensional ultrasonography is a poor modality to identify uterine abnormalities. Three dimensional ultrasonography and MRI are better.[8] These were not utilized in our case, and could be considered in future similar cases.
As it has been shown in the figures, the bicornuate uterus came to light only after the delivery of the fetus, and just prior to uterine incision closure.
The bladder appeared to be pulled up and it was attributed to her previous 2 surgeries, and since dissection of the uterovesical fold of peritoneum was done, it appeared as though the lower uterine segment was reached. Whereas, in actuality, only on the right side the lower segment of the uterus was reached. On the left side, the incision extended into the junction of the two horns without actually entering the cavity of the other horn.
There was no problem in approximating this oblique incision. Despite a comprehensive literature search, the authors have not been able to find any reported cases of similar description.
Luckily for this patient the incision did not injure the non gravid horn. However, such a surgical error can occur in rare cases of undiagnosed malformed uteri. One method of prevention of such an injury would be to inspect the uterine contour and the round ligaments prior to the incision on the uterus. However, the operating surgeons in this case, did not do it. They did not entertain the possibility of a pregnancy in a single horn of a bicornuate uterus prior to delivery of the fetus as she had a 1st trimester ultrasound scan and she had a prior cesarean birth. This appears to be the main learning point for readers here.
Even if such inspection is done, there can be a possibility that the non-pregnant horn lies posteriorly and comes to vision only after delivery of the fetus.
Whether the non-confirmation of uterine malformation prior to incision on the uterus constitutes a complication or a medical error is debatable. Pettker, in a systematic review, has described that human and systemic errors are an innate part of medical and surgical procedures. It has also been opined that many obstetric errors, specifically those that are not reportable to the governmental authorities, tend to be under reported and are assumed not to be happening at all, which is erroneous. Further, it has been opined that such events should be considered for disclosure to not only the patients, but also to medical professionals.[9,10]

Whenever there is abnormal perinatal outcome (uterine rupture in this case), women must be clearly counseled about preserving medical records and providing it to attending doctors of subsequent pregnancies. In patients with prior cesarean sections with poor outcomes, three dimensional ultrasonography or MRI could be considered in the early pregnancy, considering the possibility of a malformed uterus. Intra operatively, uterus should be inspected in-toto, both round ligaments should be identified to centralize the uterus before an incision is taken. Failure to identify both round ligaments should alert the obstetrician to the possibility of an underlying uterine malformation.