A Rare Case Of A Large Asymptomatic Cervical Leiomyoma

Leiomyomas are most common benign tumors of the uterus. Most of them are situated in the body of the uterus and rarely, in about 1-2% of cases, they are located in the cervix and cause bowel and bladder pressure related symptoms owing to their proximity to these structures. We report an unusual case of a 33 year old female with a large cervical leiomyoma with no associated bowel and bladder symptoms where myomectomy followed by total abdominal hysterectomy was done.

A 33 year old woman, married for 13 years, who had undergone two lower segment cesarean sections in the past and had one living 11 year old male child, presented to the outpatient department with dull aching lower abdominal pain for 2 months. There was no history of altered bowel and bladder habits, weight loss, decreased appetite, menstrual irregularities, menorrhagia or dysmenorrhea. There was no relevant medical or surgical history.  On examination, her general condition was fair and vital parameters were within normal limits. General and systemic examination revealed no abnormality. On per abdominal examination, one Pfannensteil and one vertical midline scar were seen. There was no guarding, tenderness, rigidity or any mass. On per speculum examination, the cervix and vagina were healthy. On bimanual pelvic examination, a 7-8 cm diameter mass was felt continuous with the uterus. Ultrasonography was suggestive of a large subserosal leiomyoma of size 10.5X5X7.5 cm arising from the posterior wall of the uterus extending into the left adnexa with multiple areas of cystic degeneration within. On account of the above findings and the patient’s desire for not preserving fertility, a plan for total abdominal hysterectomy with bilateral salpingectomy was made. All investigations for fitness for anesthesia were within normal limits. Her PAP smear report was normal. An exploratory laparotomy was performed under spinal anesthesia. Intraoperatively a large cervical leiomyoma arising from the left side of the posterior part of the cervix was seen, extending into the pouch of Douglas and anteriorly up to the right lateral uterine wall with dense adhesions anteriorly with the bladder (figure 1). Both ovaries were normal. Enucleation of the leiomyoma was done by anterior left broad ligament approach. This approach was preferred because the leiomyoma was extraperitoneal, though a part of its surface was covered by peritoneum. A myomectomy was done prior to hysterectomy, because it was considered safer to restore normal anatomy first, so as to be able to clamp the uterine vessels properly and avoid injury to the ureters. Dense adhesions with the bladder were released by sharp dissection. Total abdominal hysterectomy with bilateral salpingectomy was done. Ureters were visualized again after the hysterectomy and any injury was ruled out. The specimen was sent for histopathological examination. Her recovery was uneventful. Histopathological examination confirmed the diagnosis of a cervical leiomyoma. 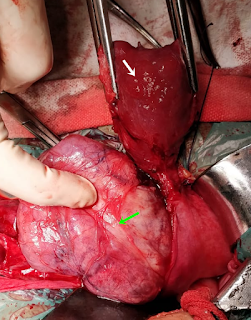 Figure 1. Intraoperative findings. The leiomyoma is being enucleated after cutting its pseudocapsule. 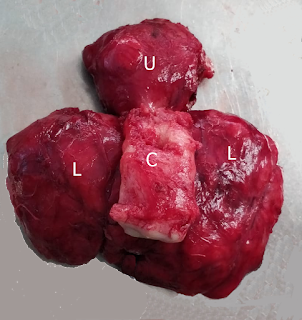 In our case, a large cervical leiomyoma was seen arising from the left supravaginal cervix, extending into the Pouch of Douglas and forwards towards the right anterior surface of the uterus, being adherent densly to the urinary bladder. Such trans-midline and circumuterine growth of a leiomyoma is quite unusual, and may be missed on both clinical examination as well on imaging like ultrasonography, computed tomography and magnetic resonance imaging. Despite its large size and extent, the patient had no complaints with respect to bowel and bladder function and menstrual bleeding or pain which was unusual. Enucleation of the large leiomyoma was done through an approach through the left anterior leaf of the broad ligament, because that was the safest and easiest approach to the extraperitoneal space where the leiomyoma was present. Myomectomy helped visualize the uterine vessels and ureters, so that the vessels could be clamped properly and injury to the ureters was avoided.  Intracapsular enucleation of cervical leiomyomas is the best approach to avoid injury to ureters and urinary bladder.