Absence Of Ipsilateral Adnexa And Its Implications

Absent ovary and fallopian tube with normal uterus has been reported in the literature. Such a finding is most likely due to ischemic necrosis following torsion. Such a situation creates a dilemma when contralateral oophorectomy is contemplated. In young women, loss of both ovaries is catastrophic. We report a case of absent unilateral ovary and tube in a young woman detected at laparotomy.

Unilateral absent fallopian tube and ovary is seen extremely rarely. Two possible mechanisms proposed are; adnexal torsion and defective development of both Müllerian and Mesonephric systems.[1] Besides fertility concerns, premature menopause is also important. If a tubal stump is present, ectopic pregnancy implantation on the stump may cause risk to life.[2]

A 30 year old multipara was referred from a peripheral hospital for right iliac fossa pain radiating to the back for a period of 3 days. The pain had aggravated on the day of admission. There was no history of nausea, vomiting, fever, or bowel/ bladder complaints. She was planned for an exploratory laparotomy with oophorectomy as her ultrasonography had diagnosed a dermoid cyst of the right ovary. Her preoperative electrocardiogram was suggestive of a ischemic cardiac condition, so she was referred to our center as an emergency case for intensive care facilities. Her last menses were about 14 days before her presentation to us, and her cycles were regular. She was para 3, living 3 and had one abortion. She was using barrier contraception. She had no significant surgical or medical history.
On examination, her vital parameters were normal. There was no pallor. Abdomen was not guarded. There was mild suprapubic and right iliac fossa tenderness. Speculum examination was normal. On vaginal examination, uterus was normal in size, with right forniceal tenderness and fullness. A 3 cm cystic mass was palpable in the right fornix. It was not adherent to the uterus.
A transvaginal sonogram done in a private hospital showed a 2.5x1.8 cm hyperechoic mass in the right adnexa, closely abutting the right ovary, probably a dermoid ovarian cyst. Uterus and left ovary were reported as normal. Sonography in our center showed a bulky right ovary of 4.3x4.1x3 cm with multiple peripherally located follicles. The vascularity of the pedicle was normal probably with detorsion. The left ovary was obscured probably by gas shadow.
Her laboratory reports were all normal. Hemoglobin was 11 gm%. Total count was 7,600/ mm3.  Blood sugar, renal and liver function tests were within normal limits. INR was normal. CA 125 was 11.9 units/ ml. She was considered at high risk for perioperative cardiac event on cardiological assessment. Exploratory laparotomy was performed for persistent pain and tenderness. The couple was asked about sterilization but they declined consent. Intraoperatively, there was no evidence of torsion of the right adnexa. The right ovary was bulky with a follicular cyst of about 1.5 cm in diameter. The tube was normal. Contra lateral ovary was absent. There was only a long tubal stump on the contralateral side. There were no adhesions. Her appendix was suspected to be inflamed, but the  surgeon who was called ruled out the same any need for intervention. No ovarian or tubal structure was seen in the pelvic cavity or abdomen when her bowels were inspected in detail by the surgeon. 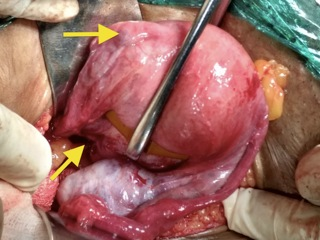 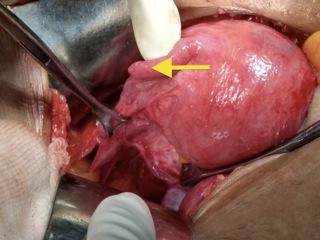 Figure 2. The tubal stump, the ovary on the left side is not visualized.

Abdomen was closed after explaining the findings to the family members. She was started on broad spectrum antibiotics with metronidazole for 5 days.  On retrospective enquiry, she denied any episode of acute abdominal pain in the past. She made good recovery and was discharged after 5 days. She was counseled about early consultation in case of pregnancy to rule out stump ectopic pregnancy.

Fertility implications for the woman with unilateral absence of fallopian tube and ovary are a major concern. In his study of fertility potential in women with a single ovary, Lass found that fertility was lower in women due to low ovarian reserve to begin with; but otherwise their fertility potential was normal.[3] For avoidance of premature surgical menopause and fertility preservation, Barsky proposes preemptive oophoropexy in women detected to have absent contralateral ovary or elongated utero-ovarian ligament.[1] An ectopic pregnancy in a tubal stump after salpingectomy is reported; the site usually is isthmic or interstitial and these cases have a higher mortality rate.[2] Po Chun et al reported a series of stump ectopic pregnancies in women who had conceived through assisted reproductive technology after salpingectomy for tubal pathology.[4] Hence it is important to counsel these patients about early reporting in case of amenorrhea.

In case of unanticipated absent tube and ovary, an attempt should be made to search for the ovarian remnant in the pelvis and the retroperitoneum. Risk of stump ectopic pregnancy has to be borne in mind during counseling these patients.