Congenital anomalies of the uterus and vagina caused by alterations in development or fusion of the Mullerian ducts are associated with multiple obstetric problems.  Here we present a case of a 21year old unmarried female with unicornuate uterus with a non-communicating horn. She came in an emergency with severe abdominal pain and ultrasound was suggestive of large left ovarian cyst with ovarian torsion. Intraoperatively there was torsion of hematosalpinx. She was also a known case of bicytopenia with non-cirrhotic portal fibrosis.

Hematosalpinx is a medical condition involving blood collection into cavity of fallopian tubes. Its various causes include ruptured tubal abortion, endometriosis, cryptomenorrhoea, tubal carcinoma. Torsion in hematosalpinx is extremely rare affecting 1 in 1.5 million women.[1] This condition is rarely diagnosed pre-operatively and by the time surgery is undertaken, the vascular supply of the affected adnexa is usually damaged. Making a differential diagnosis between an ovarian and a tubal torsion is very difficult and a definitive diagnosis is always made after a laparoscopic or exploratory surgery.

A 21year old unmarried female came to the emergency room with complaints of severe pain in abdomen since 2 days. On abdominal examination, 14 weeks size cystic mass was felt arising from the pelvis which was mobile and tender. On per rectum examination, 10x10 cm cystic mass was felt anterior to the uterus with mild tenderness. Ultrasound was suggestive of right ovarian torsion of a 10x10 cm ovarian cyst and also presence of bicornuate uterus with hematometra with hematosalpinx was documented. There were no renal anomalies. She was a known case of bicytopenia with non-cirrhotic portal fibrosis. In view of ovarian torsion, she was posted for emergency exploratory laparotomy with cystectomy SOS salphingo-oophorectomy. Pre-operative investigations were sent. Liver function tests showed raised total serum bilirubin of 2.67 mg/dl and alanine transaminase was mildly raised to 73.40 IU/l. Hemoglobin was 8.2 gm%, platelet count was 42,000/ cm3 and total leucocyte count was 1700/ cm3. Her coagulation profile was also deranged with INR of 1.73 and plasma fibrinogen of 115 mg/dl. Hematology and gastrointestinal medicine opinion was taken. Four units of fresh frozen plasma, 4 units of platelets and one unit of packed cell volume were transfused as per hematology advise pre- operatively. Gastro intestinal medicine advised to proceed with the surgery as it was an emergency and asked the her to follow up post procedure. Exploratory laparotomy was done under general anesthesia. Intraoperatively, unicornuate uterus with right non-communicating horn with right hematometra was noted. Also, right hematosalpinx of 10x12 cm was seen with four turns of torsion. A hemorrhagic cyst of about 3 cm was seen in the right ovary. Left fallopian tube and ovary were normal. Right hematometra of around 5 cc volume was seen which was drained. Right salpingectomy followed by excision of right non-communicating horn of uterus was done. Base was sutured with polyglactin 910 no. 1 in multiple figure of eight fashion. Right ovarian cystectomy was done with ovarian reconstruction with polyglactin 910 2-0. Postoperatively she was stable and discharged on day 5 of surgery after an uneventful course. Histopathology report was suggestive of endometriotic cyst in right ovary with hematosalpinx with unicornuate uterine horn with small foci of adenomyosis. 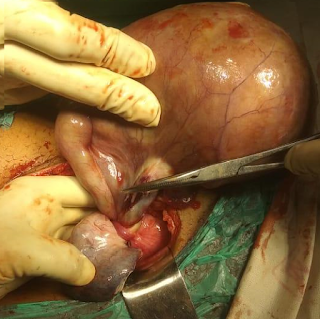 Congenital uterine anomalies are estimated to occur in 0.1 to 0.5 % of women.[2] Women with Mullerian duct anomalies can have reproductive problems like infertility, first trimester abortions, obstructed Mullerian systems that present with hematocolpos, hematosalpinx and hematometra. This patient presented with right hematometra and ipsilateral hematosalpinx with torsion of the hematosalphinx.  The first line investigation is ultrasonographic evaluation. Newer three-dimensional ultrasound can offer an added advantage. MRI is considered the investigation of choice for imaging uterine anomalies.
EAC classification of congenital anomalies of uterus proposed by Parulekar is a comprehensive classification of congenital malformations of the female genital tract that is based on embryological aberration.[3] According to this classification our case can be classified as follows.