Bathija S*, Hatkar P**.
(*First year resident, ** Associate Professor, Department of Obstetrics and Gynecology, Seth G S Medical College & K E M Hospital, Mumbai, India.)
Abstract
Ovarian mucinous tumors in adolescence are rare with less than fifty cases reported in literature. Majority of them belong to the benign or borderline epithelial tumor type with only twelve cases of cystadenocarcinoma reported till date. Here we discuss a case of a 17 year old girl admitted to our hospital with pain and distension of abdomen. She underwent ultrasonography (USG) and computed tomography (CT) of the pelvis. Both modalities revealed a large ovarian cyst. The management of such cases is tricky as fertility sparing approach is desired. However, left salpingo-oopherectomy was done in view of suspected ovarian mucinous cystadenocarcinoma on frozen section. The case is presented for its rarity and unique presentation.
Introduction
Epithelial ovarian tumors are not common in childhood and adolescence. They comprise 15-20 % of cases with malignant lesions being rare in this age group. Ovarian mucinous carcinomas have a distinct biological behaviour and clinical course compared with serous carcinoma subtypes.[1] Primary ovarian mucinous carcinoma is much less common than previously thought (6-25 %) and probably accounts for only 2.4 % of ovarian mucinous  cancers.[2,3] The rest are reclassified as mucinous intraepithelial carcinoma, borderline tumor or metastatic disease from a non-ovarian origin (stomach, colon, pancreas, breast, appendix, uterine cervix).[4] Common features of primary ovarian mucinous carcinoma include young age at the time of diagnosis, well-differentiated histology (typically within one ovary) and rare extraovarian involvement.[1,5] All these clinicopathological characteristics suggest that the management of ovarian mucinous carcinoma should be different to that for ovarian serous carcinoma. However, more evidence is required to consolidate these findings. We present a rare case of a 17 year old female with primary mucinous ovarian cystadenocarcinoma.
Case Report

A 17 year old girl presented to the gynecology outpatient department with complaints of abdominal distension which was insidious in onset associated with lower abdominal pain for the past 3 months. There was no significant medical or surgical history. She had no complaints of weight loss, loss of appetite or menstrual complaints. On examination, her general condition was fair, she was thin built and weighed around 49 kg. Her general physical examination was unremarkable. On abdominal inspection, there was generalised distension and the skin over the abdomen was tense and shiny. On palpation, a cystic mass was felt arising from the pelvis and extending till the epigastrium and on both sides upto iliac fossae occupying the whole of the abdomen. The mass was firm in consistency with no appreciable solid areas. Per vaginal examination revealed a firm cystic mass with lower extent of the mass that caused forniceal fullness. Tumor markers were evaluated and showed elevated CA 125 level of 131 U/L. β-human chorionic gonadotropin, alpha feto protein, carcino embryonic antigen and lactate dehydrogenase were within normal limits. Mantoux test was negative. Complete hemogram, liver function test and coagulation profile were found normal. USG revealed right ovarian 25x15 cm unilocular cyst with one solid component measuring approximately 4x2 cm without vascularity. There was evidence of bilateral ureteric compression and bilateral hydronephrosis, right more than left with no ascites. Contrast enhanced CT scan of the abdomen and pelvis revealed a well-defined 25x5x23 cm cyst having few non-enhancing septa with foci of calcification within. Right ovary showed multiple follicles and left ovary was not seen separately. The mass was displacing the retroperitoneal structures posteriorly and hydronephrosis with hydroureter in upper one third of the right ureter was confirmed. There was no evidence of ascites or lymphadenopathy. Urinary bladder, visualised vessels, bones and sections of chest were normal. CT scan impression was that of a mature cystic teratoma of left ovary or a mesenteric cyst. Urological examination was done and DJ stenting of the right ureter was performed for the treatment of hydronephrosis. After obtaining a valid consent, she was posted for exploratory laparotomy with left ovarian cystectomy SOS left salphingo-oophorectomy. A vertical midline skin incision was taken. A left ovarian cyst measuring 25×20 cm was noted. [Fig. 1] Left fallopian tube was found stretched over the cyst. There was no evidence of ascites. The cyst was punctured inadvertently while opening the abdomen. There was minimal spillage of cyst fluid into the abdominal cavity. About six liters of mucinous fluid was aspirated from the cyst, which was sent for cytology examination for presence of malignant cells. The left ovarian complex cyst wall was excised and sent for frozen section. It showed presence of two solid areas both approximately 4x3cm. On the right side, a simple ovarian cyst approximately 3 cm in diameter was found. Right sided ovarian cystectomy and ovarian reconstruction was done. The cyst fluid was sent for cytology and cyst wall was sent for frozen section. Frozen section report of the left ovarian cyst showed atypical proliferative mucinous neoplasm suspicious of mucinous carcinoma and cytology report did not show malignant cells. Right ovarian cyst showed features of a benign cyst. Left salpingo-oophorectomy was done. There was no evident lymphadenopathy and uterus, right fallopian tube, pouch of Douglas, under surface of liver, omentum and peritoneum were grossly unremarkable. However, omental biopsy was done to rule out micrometastasis after noting frozen section report and counseling the parents and taking appropriate consent.
Final Histopathology report:
This confirmed the diagnosis of mucinous cystadenocarcinoma of left ovary with no metastasis. 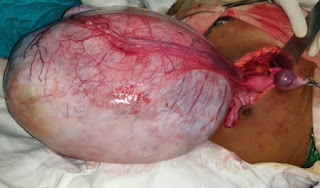 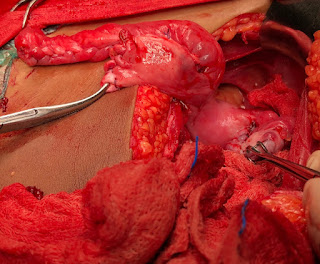