We present to you a rare case of massive broad ligament ovarian leiomyoma in a 48 year old woman, para 4, who came with complaints of continuous pain in abdomen since 3 years, who also had undergone total abdominal hysterectomy 6 years back for abnormal uterine bleeding for uterine leiomyomas. While preoperative imaging gave differential diagnosis of broad ligament leiomyomas or ovarian tumor, her tumor marker CA125 was negative, the intra-operative findings were suggestive of ovarian origin, and histopathological findings confirmed a leiomyoma.

Uterine leiomyoma is a common occurrence but extrauterine leiomyoma are rare and they pose a great diagnostic challenge due to their unusual location. Leiomyoma is benign tumor arising from smooth muscle cells. Technically, it can arise from any anatomical site which has smooth muscle cells in it. Extrauterine leiomyomas are usually seen originating from genitourinary tract (from the ovaries, fallopian tube, broad ligament, urinary bladder, urethra, vagina and vulva).[1,2].  Ovarian leiomyomas are even rarer. It is important to differentiate it from a malignant ovarian tumor which can be done by doing magnetic resonance imaging (MRI) and serum cancer antigens and observing intra-operative gross anatomical features of the tumor. We present to you a similar case of a huge broad ligament ovarian leiomyoma in a post-hysterectomized female.

A 48 year old woman, para 4 living 4, with all full term normal deliveries, presented to our outpatient department with complaints of continuous abdominal pain for 3 years and occasional bleeding per rectum for 2 years. There were no other significant complaints. She had undergone total abdominal hysterectomy 6 years back for abnormal uterine bleeding for 12 weeks’ size uterus with leiomyomas. On per abdominal palpation there was 22 weeks’ size mass arising from pelvis, firm in consistency with restricted mobility. Per speculum examination revealed normal looking vagina. On bimannual examination, per abdominal findings were confirmed and a nodularity of the mass could be felt through the vault. The patient was also evaluated for bleeding per rectum and found out to have hemorrhoids. Transvaginal and transabdominal ultrasonography (USG) showed a large hypoechoic lesion arising from pelvis around 15x8 cm in size, possibly broad ligament fibroid or ovarian tumor. The ovaries could not be visualized separately. A contrast enhanced computerized tomography (CT) scan revealed a 1.5x15.5x16.5 cm ( APxTRxCC) sized mass lesion in the pelvis showing heterogeneous enhancement. Right ovary could not be seen separately. Arterial supply of the lesion appeared to be from branches of right gonadal artery and venous drainage into gonadal vein. Fat planes were compressed but maintained. Left ovary was normal, seen separately from the lesion. The mass was abutting right ureter without obstruction. The impression was of broad ligament leiomyoma. The serum cancer antigen CA125 level was in normal limit. Preoperatively right ureteric stenting was done and the patient was posted for exploratory laparotomy. The intra-abdominal examination showed a large mass of around 20 cm in diameter arising from pelvis, with firm consistency and irregular bosselated surface with many vessels running across it. Right Fallopian tube was stretched over the mass, right ovary could not be seen separately, suggesting an ovarian origin. The right ureter was seen running under the peritoneum on the right side of the tumor. The left fallopian tube and left ovary were seen adherent to bowel. Bowel loops were adherent to the mass posteriorly and urinary bladder was adherent anteriorly. The mass was freed from all the adherent structures by sharp and blunt dissection. The right ureter was freed from the mass. The ureteric integrity and course were confirmed on both the sides. The mass was separated out by clamping, cutting and ligating the feeding infundibular vessels. Pelvic peritoneum was closed with a suture of No. 1-0 polyglactin. The mass sent for histopathology examination which confirmed leiomyoma with hyaline change. Postoperative course of the patient was uneventful. The ureteric stent was subsequently removed on day 7. 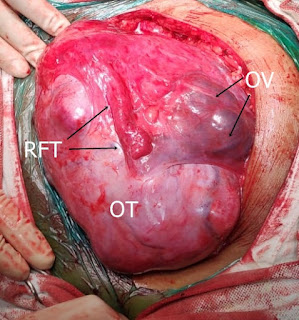 Uterine leiomyoma is the most common benign tumor of female genital tract. Its true prevalence is underestimated. According to recent longitudinal studies, the estimated lifetime risk of leiomyoma in a woman over the age of 45 years is more than 60%, and is more common in blacks than in whites. The cause of leiomyoma remains unclear and its biology poorly understood. The key regulating factors in growth of a leiomyoma are ovarian steroids- oestrogen and progestogen, growth factors and angiogenesis, and the process of apoptosis. Black race, heredity, nulliparity, obesity, polycystic ovary syndrome, diabetes and hypertension are associated with increased risk, and there is emerging evidence that familial predisposition to leiomyomas is associated with a distinct pattern of clinical and molecular features compared with leiomyomas in families without this prevalence.[3] In addition, unusual growth patterns may be seen, including benign metastasizing leiomyoma, disseminated peritoneal leiomyomatosis, intravenous leiomyomatosis, parasitic leiomyoma, and retroperitoneal growth. In the presence of such a pattern, a synchronous uterine leiomyoma or a previous hysterectomy for removal of a primary uterine tumor may be indicative of the diagnosis.[3]
Ovarian leiomyomas are rare benign tumors comprising of 0.5%–1% of all benign ovarian tumors.[6] They are mostly unilateral, incidently found, a few millimeters in diameter, and are asymptomatic. They occur in premenopausal women.[7,8] Ovarian leiomyomas can be primary, secondary or parasitic in origin. Primary ovarian leiomyomas originate from ovarian tissues, including the intraovarian blood vessels, smooth muscle fibers, or similar tissues within the ovarian stroma and tunica albuginea.[4-6] Secondary leiomyomas can occur from intravenous leiomyomatosis or from leiomyomatosis peritonealis disseminata.[1] Parasitic ovarian leiomyomas are extraovarian in origin like from uterine pedunculated leiomyoma which later gets attached to the ovary.[4] The incidence of primary ovarian leiomyomas is low.[4] In the present case, considering that the patient had undergone a hysterectomy for uterine leiomyomas 6 years back, the possibility of a broad ligament leiomyoma could not be ruled out, the genetic tendency for development of leiomyomas being as before hysterectomy.
Because ovarian leiomyoma are the rare tumors of the ovary, they are not suspected preoperatively or intraoperatively. They can be easily misdiagnosed as either ovarian malignant tumors or ovarian fibroma/thecoma or uterine pedunculated leiomyoma or broad ligament leiomyoma.[4,9]
Imaging methods include USG, CT, and MRI. It is also important to differentiate from malignant ovarian tumor by doing tumor markers such as CA125. But confirmatory diagnosis can only be made after histopathological examination and immunohistochemistry.[10] A possibility of leiomyosarcoma should also be ruled out.[7] Whenever it is highly suspicious of malignancy a frozen section of the tumor can also be helpful to formulate the surgical management plan.
Our case was unusual in that the ovarian tumor had grown between the two leaves of the broad ligament, while most of the ovarian tumors grow into the peritoneal cavity. Development of such a tumor is further unusual in that it is not often reported after a hysterectomy. Since there is no uterus to impede its growth, such a mass is likely to grow across the midline and press upon structures on both sides of midline, and the urinary bladder anteriorly. Our patient had a globular tumor in midline, to which the bladder was adherent anteriorly.
The surgical approach will be dependent on age of the patient, menopausal status, and wishes for fertility. For patients nearing menopause or postmenopausal women hysterectomy with bilateral salpingo-oopherectomy can be done. If the tumor is unilateral, unilateral salpingo-oopherectomy can be done considering the benign nature of the tumor. In young women where fertility needs to preserved ovary can be preserved by enucleating only the leiomyoma.[11,12] In our case, since the woman had undergone hysterectomy and the tumor was unilateral, we undertook unilateral salpingo-oopherectomy.

It is important to consider differential diagnosis of ovarian leiomyoma in a case of solid adnexal mass. Because of its rarity and imaging similarities to most commonly occurring uterine pedunculated leiomyoma, it is difficult to diagnose it preoperatively. But accurate intra-operative observations and histopathological examination of the tumor confirms the diagnosis. Immunohistochemistry for actin and desmin will also add to the diagnosis.