Peripartum Hysterectomy In A Case Of Post Cesarean Pyometra

Peripartum hysterectomy is commonly performed for obstetric hemorrhage and adherent placenta. We report a case of post cesarean pyometra and uterine necrosis who underwent hysterectomy wherein the presenting features were superficial wound gape and vaginal discharge.

Uterine scar dehiscence can complicate cesarean section with complications like post partum hemorrhage, endomyometritis, localized/ generalized peritonitis, and sepsis.[1] Patients may need to undergo exploration and hysterectomy to treat sepsis. Peripartum hysterectomy is defined as hysterectomy performed after birth until 1 month after delivery.[2, 3] The incidence of emergency peripartum hysterectomy ranges from 0.2 to 5.09 per 1000 deliveries. The median of its incidence is 0.61 per 1000 deliveries.[4] We present a case of post cesarean pyometra and scar dehiscence presenting as superficial abdominal wound gape. Patient was taken up for exploratory laparotomy and the findings of uterine necrosis and purulent collection in the abdomen ultimately warranted a peripartum hysterectomy.

A 20 year old para 1 woman was referred with post cesarean wound gape and vaginal discharge from post-operative (post-op) day 7 not responding to antibiotics. She had undergone cesarean section 13 days ago at a private hospital for anhydramnios and rupture of membranes for greater than 12 hours. On examination she was conscious, oriented, afebrile, pulse was 90/min., blood pressure was 110/70 mm of Hg; cardiovascular and respiratory system examinations were normal. Abdominal examination revealed uterus of 16-18 weeks, contracted. Superficial skin gape with subcuticular sutures and purulent foul smelling discharge was seen from the suture line, slough was present at the base of the wound but the rectus sheath beneath was intact. Per speculum and per vaginal examination revealed hot inflamed vagina with copious foul smelling discharge.
Investigations showed hemoglobin of 9.1 gm/dl, leucocyte count of 14,100/dl, platelet count of 2.88 lakhs/µl, normal liver and renal function tests. A 30 cc organized collection was noted in the pelvis on sonography. Contrast-enhanced CT scan of abdomen and pelvis showed pyometra with wound dehiscence, 21x21 mm collection tracking out from the uterus, multiple collections in the abdominal cavity upto the right subhepatic region were reported.
She was started on broad spectrum parenteral antibiotics (piperacillin-tazobactam, metronidazole and gentamycin). She developed fever and leucocyte count rose to 18,600/dl. Decision for emergency exploratory laparotomy was taken.  Intra-operatively, uterus was found to be soft with shaggy necrotic incision line and wound rupture of the  entire suture line. Purulent intrauterine collection of about 50 cc was noted. Collection was also in the abdomen along the paracolic gutters reaching upto the inferior surface of the liver (about 150 cc). 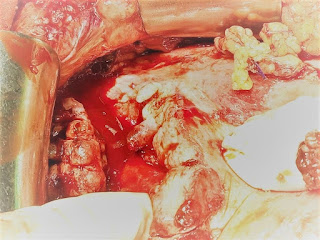 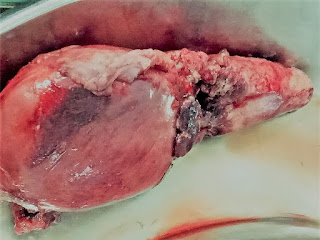 
Omentum was adherent to the right lateral abdominal wall, uterine cornua and right fallopian tube. Sigmoid colon was adherent to posterior surface of the uterus. Small bowel loops were matted. She underwent hysterectomy in view of these findings of uterine necrosis and abdominal sepsis. Surgery was performed by a multidisciplinary team of senior obstetricians, general surgeons and urosurgeons. Two packed red blood cell volumes were transfused intraoperatively. She was monitored post operatively in anesthetic intensive care unit for 2 days and thereafter in the ward.
Post-operatively antibiotics were changed according to the culture sensitivity report. Injection Vancomycin was started in response to wound swab that grew Enterococcus faecium and injection Meropenem was started in response to growth of sensitive Enterobacter aerogenes. She recovered uneventfully with no fever spikes and leucocyte count normalizing by post-op day 6. Suture removal was done on day 14, her wound had healed completely and she was discharged. On follow-up after 6 weeks she was asymptomatic with healthy suture line and no discharge.

Uterine and abdominal involvement in the septic process should be kept in mind in non healing wounds. Timely management of rupture of membranes, strict aseptic techniques intra-operatively and adequate antibiotic cover should be followed at the primary treating hospital itself. CT/ MRI are helpful in arriving at a diagnosis, however an exploratory laparotomy based on clinical findings should never be delayed. While conservative measures like lavage may help in localized infections, peritoneal sepsis is best managed with hysterectomy.