Cesarean scar ectopic is one of the rarest forms of ectopic pregnancy where the gestational sac is implanted in the myometrium at the site of previous cesarean section (CS) scar.  Transvaginal ultrasonography (USG) and Doppler are diagnostic. Complications such as uterine rupture and hypovolemic shock may be life-threatening and hamper fertility; if diagnosed early, conservative management with systemic or local methotrexate, or uterine artery embolization (UAE) to prevent hemorrhage, is possible if the patient is hemodynamically stable. We report a case of cesarean scar ectopic managed conservatively with methotrexate therapy.

The first case of cesarean scar ectopic was reported in 1978.[1]  Incidence varies from 1:1800[2] to 1:2226[3] of all pregnancies, with increasing incidence due to increased number of both primary and repeat CS.[4] Associated risk factors are previous CS, and procedures which cause endometrial damage like myomectomy, adenomyosis, IVF and embryo transfer, dilation and curettage (D&C), and manual removal of placenta. It has been proposed that pregnancy enters the cesarean scar via microscopic fistulae.[4]

A 27 years old second gravida with one previous LSCS was admitted to the emergency room of our tertiary institute with complaints of painless vaginal bleeding since 2 to 3 weeks. Bleeding was sudden in onset, without prior amenorrhea, with spotting on some days, alternating with episodes of profuse bleeding. On examination, pallor and tachycardia were noted. Per abdominal examination was normal. On vaginal examination, uterus was anteverted, bulky, fornices were unremarkable. Urine pregnancy test was positive.
Ultrasonography showed normal-sized uterus with a 0.5cm cystic area with surrounding hyper-echogenecity at the LSCS scar site, suggestive of a gestational sac. Doppler showed. There was no evidence of gestational sac in endometrial cavity. Minimal free fluid was seen in cul-de-sac. 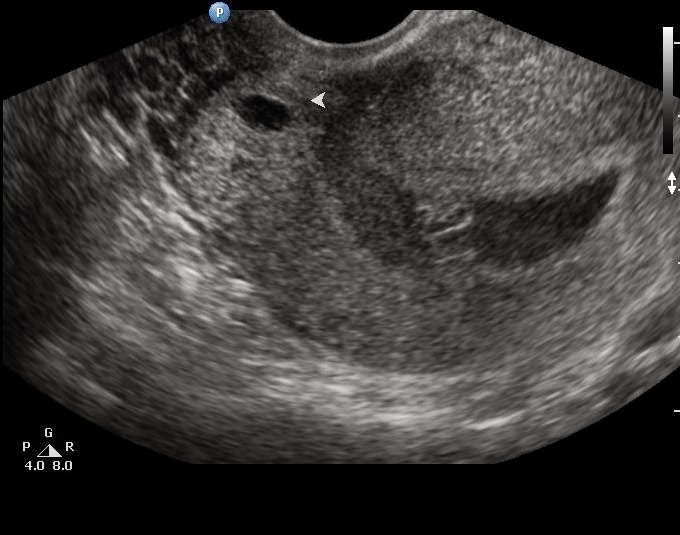 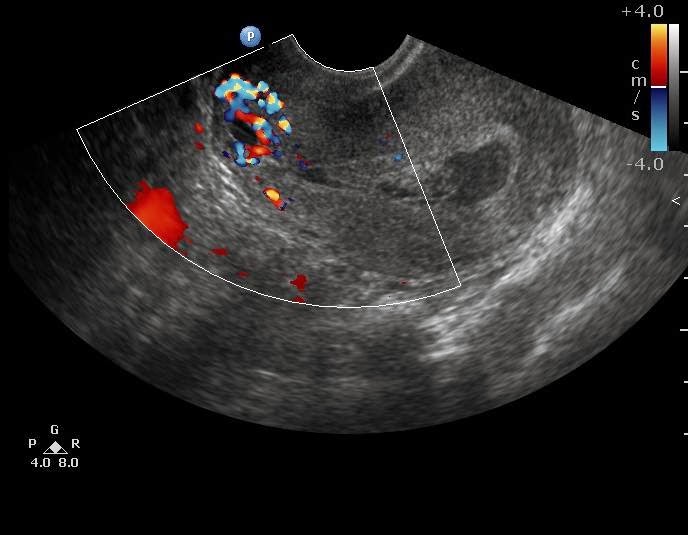 As patient was hemodynamically stable, sac size was small and initial serum βhCG was 6484mIU/ml, decision for medical treatment with methotrexate (40mg IM at 1mg/kg body weight) was taken after baseline biochemistry. However, βhCG remained the same after the first dose of methotrexate; hence transvaginal USG-guided intragestational injection of 40mg methotrexate was performed, followed by leucovorin rescue (0.4mg IM). Subsequently, βhCG fell to 3009mIU/ml after 1 week (>50% decrease), 1026mIU/ml after 2 weeks and 100mIU/ml after 6 weeks. Two weeks after the procedure, sonography showed no lesion or vascularity.

Patients of scar ectopic commonly present with painless, sometimes heavy, vaginal bleeding. Uterine tenderness may be elicited if the ectopic is in process of rupture. Unlike adherent placenta where the placenta invades the myometrium at the scar site but the pregnancy is uneventful, scar ectopic is more aggressive in its behaviour because of its early invasion which can lead to rupture, and massive hemorrhage.

Diagnosis is made by USG and Doppler; MRI is confirmatory. Diagnostic criteria on Doppler to differentiate from cervical ectopic pregnancy are:[3]

Jurkovic has described a negative “sliding organ sign” as diagnostic of scar ectopic –the inability to displace the gestational sac from its position at the level of the internal os by gentle pressure applied by the transabdominal probe.[4]

Mode of treatment depends on the presentation as rupture and severe hemorrhage may warrant hysterectomy. Cesarean scar pregnancy may be managed conservatively if diagnosed early. Conservative modalities include excision of trophoblastic tissue through hysterolaparoscopy; intralesional KCl, local or systemic methotrexate; D&C under laparoscopic guidance with Foley balloon tamponade.  However, D&C should not be done as first line treatment due to risk of perforation and catastrophic hemorrhage.[5] Selective UAE may be prophylactically used with any conservative procedure to prevent excessive bleeding and conserve fertility.

Intragestational injection of methotrexate is preferable to systemic regimen as it achieves a high concentration locally and interrupts the pregnancy more rapidly. Baseline βhCG of >5,000mIU/ml is associated with failure of systemic methotrexate and better response to intralesional administration5. Success of treatment is monitored by hemodynamic status, regression of gestational sac on USG, and falling βhCG levels, as seen in our case.

In a hemodynamically stable patient, laparoscopy is the best choice as it provides both diagnosis and definitive management. Surgical technique described is vasopressin injection in the tissue surrounding the sac to reduce bleeding, excision and retrieval of the scar ectopic mass, and closure of the defect and hemostasis with endosutures and bipolar cautery.[6]
Long-term outcomes after conservative treatment include concerns about future fertility and recurrence of cesarean scar ectopic. As uterine rupture can occur in the next pregnancy, the scar should be evaluated hysteroscopically before next pregnancy and by USG during subsequent pregnancies.[5]
To conclude, for women with cesarean scar ectopic who desire fertility, in the absence of hemodynamic instability, conservative treatment with systemic or local methotrexate is an excellent option.