A 30 years old woman G5P3L2IUFD1MTP1 with 9 weeks of pregnancy presented with complaints of abdominal pain and giddiness. She had had 2 cesarean sections in the past. She had taken anti-tubercular treatment for genital tuberculosis 4 years ago. She had already undergone USG elsewhere, which showed features of ruptured ectopic pregnancy. On presentation she was pale, afebrile, with a pulse of 92/min and blood pressure of 110/60 mm of Hg. Her abdomen was distended, tender and showed a scar of previous LSCS. On vaginal examination the uterus was found to be of 6 weeks size. Tenderness was present on cervical motion and in the right fornix. The left fornix was free. Culdocentesis yielded 2-3 ml of blood which did not clot. USG at our center showed a heterotopic pregnancy with a single, live intrauterine gestation of 10 weeks with sub-chorionic bleed and a right side ruptured tubal ectopic pregnancy. Her Hb was 7.2 gm%, platelet count,  renal and liver function tests were normal. During an exploratory laparotomy  a hemoperitonium of about 500 ml, and a right tubal ampullary unruptured but oozing ectopic gestation were found. Both ovaries and the left salpinx were normal. Right terminal partial salpingectomy was done. We looked for the source of persistent bleeding and found a 5 mm actively bleeding rent in the previous LSCS scar near its right lateral angle. Products of conception were in the process of extrusion from there. A fetus measuring 3.5X1X0.5 cm with identifiable head, eyes, limbs and umbilical cord was removed. Placenta measuring 6.5X5.0X0.5 cm was also removed. The gestational bed was communicating with the uterine cavity. The scar was excised and the lower uterine rent was repaired with polyglactin 910 No. 0 suture. The patient was transfused with 2 units of packed cells. Her postoperative course was uneventful. Pathological examination of the tube showed the fallopian tube measuring 4X3X1.5cm to be externally congested and with a cystic structure within it measuring 0.6X0.6 cm in it. There were foci of hemorrhages and fibrin. Partially mixed inflammatory cells in the tubal wall and multiple chorionic villi, decidual and trophoblastic tissue were seen on microscopy. 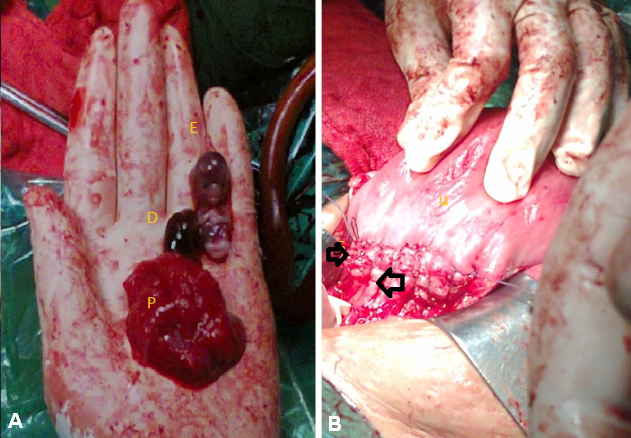 There are many case reports in literature about multiple ectopic pregnancies, but our case is unique as it is first of its kind with simultaneous scar and tubal ectopic.[4,5,6] Various treatment options ranging from conservative management to radical surgery like hysterectomy are available.[6,7]  Hemoperitoneum warranted the surgical intervention in our patient. The scar ectopic was in the process of rupturing as the USG had shown a live intrauterine fetus. Timely detection allowed an optimal conservative surgical treatment. Previous cesarean section and old genital tuberculosis predisposed the patient for simultaneous scar and tubal ectopic pregnancy.

Multiple ectopic pregnancies must be considered in patients presenting with clinical and USG features suggestive of heterotopic pregnancy, particularly after previous cesarean deliveries and history of tuberculosis.