Myomectomy is operative removal of uterine leiomyoma and reconstructing the uterus. Conventionally the uterine incision is made in its anterior or posterior wall. These incisions are through peritoneal covering of the uterus, which can lead to development of adhesions and related morbidity. A novel approach of incision on lateral (extraperitoneal) surface of the uterus is presented. A review of the world literature reveals that this is the first time this approach has been described.

The bulk of the myometrium is in the anterior and posterior walls of the uterus, and leiomyomas develop there.[1,2] Conventionally myomectomy is done by making an incision on the uterine wall over the leiomyoma, usually in midline, and making additional tunnelling incisions in the leiomyoma bed for removing other leiomyomas lying on the side.[3,4,5] An incision is made directly over the leiomyoma too if required. [3,4,5] But the anterior and posterior surfaces of the uterus are covered by visceral peritoneum and any incision on them produces a scar to which bowel and/or omentum can get adherent. Such adhesions can lead to infertility, retroverted fixed uterus, chronic abdominal and pelvic pain and intestinal obstruction.[6,7] An incision on the extraperitoneal surface of the uterus would avoid such a scar and all the related complications. A novel approach of incision on lateral (extraperitoneal) surface of the uterus is presented.

The abdomen is opened through infraumbilical vertical or transverse incision. The uterus and pelvic structures are examined. Lateral approach to the leiomyoma is possible if the leiomyoma is large, is in the upper segment of the uterus, and has grown radially in all directions. The bowel and omentum are packed away into the upper abdominal cavity. Any technique used for reducing blood loss during myomectomy can be used, such as use of Bonney’s myomectomy clamp, Rubin’s technique of rubber tourniquet, and injection of diluted vasopressin around the uterine vessels.[8] If the leiomyoma is exactly in the midline and expanding equally in all directions, either right or left lateral approach can be used. If it is anterolateral, then that side is used in which direction it has grown. The round ligament on that side is divided between two clamps, and the clamps are replaced by ligatures. The broad ligament is opened further in downwards direction. It is separated from the underlying uterine surface by gentle blunt dissection. The position of the uterine vessels is noted. They are located posteriorly if the leiomyoma is in the anterior uterine wall, and anteriorly if the leiomyoma is in the posterior uterine wall. A longitudinal incision is made in the lateral uterine wall over the bulge produced by the leiomyoma, away from the uterine vessels. It is deepened in the coronal plane until the pseudocapsule of the leiomyoma is cut. The leiomyoma is held with an instrument like a tenaculum, bulldog vulsellum, Allis forceps or Bonney’s myoma screw. It is enucleated by blunt and if necessary, sharp dissection. A downward extension of the incision is prevented by applying an Allis’ forceps there and by exercising due care. If the uterine incision is found to inadequate for removal of the leiomyoma, it is enlarged by making horizontal cuts in its center anteriorly and posteriorly, still restricting them to the extraperitoneal portion of the uterine surface and remaining away from the uterine vessels. A leiomyoma too large to be removed through the uterine incision is removed by morcellation. Any other leiomyomas present are removed through tunnelling incisions as have been described conventionally. Hemostasis is achieved in its bed by ligatures, sutures and electrocauterization as appropriate. Its cavity is closed by a series of interrupted sutures of No. 1 delayed absorbable sutures. The cut end of the round ligament are approximated. The defect in the broad ligament is sutured with a continuous suture of No.1-0 delayed absorbable suture. A drain may be left in the broad ligament, though it is usually not required. The abdomen is closed in layers. 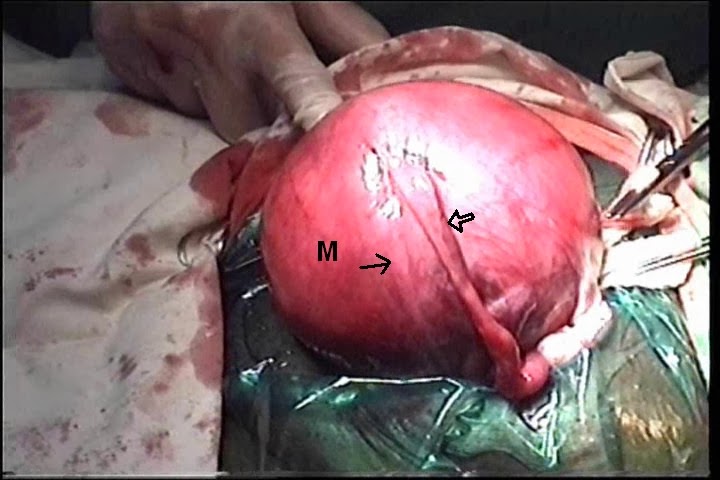 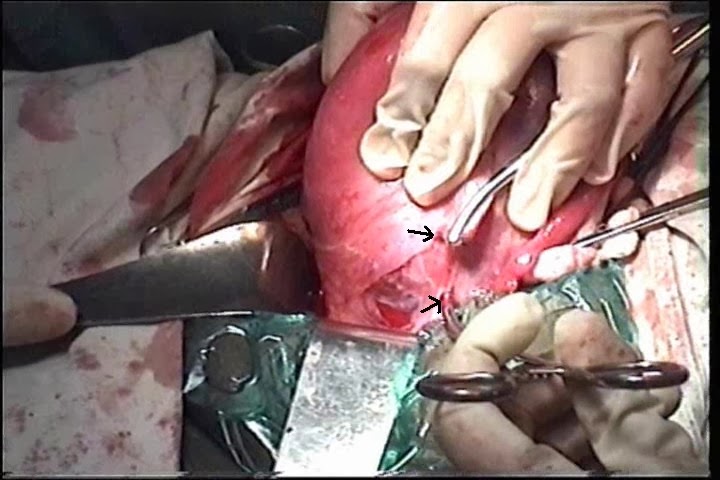 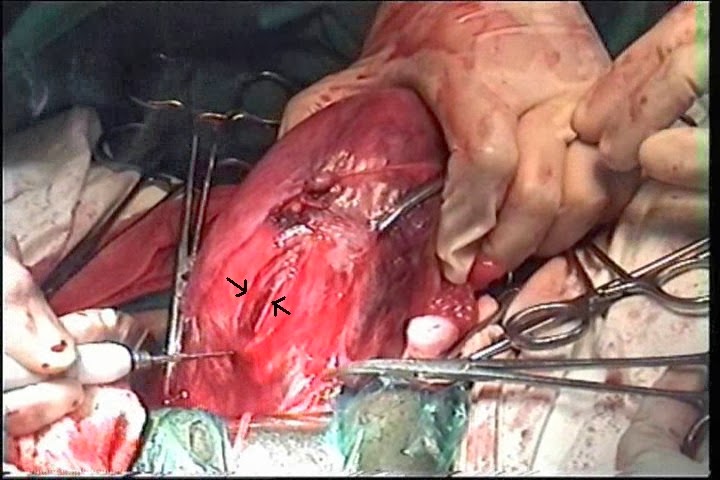 Figure 3. The pseudocapsule of the leiomyoma is cut. 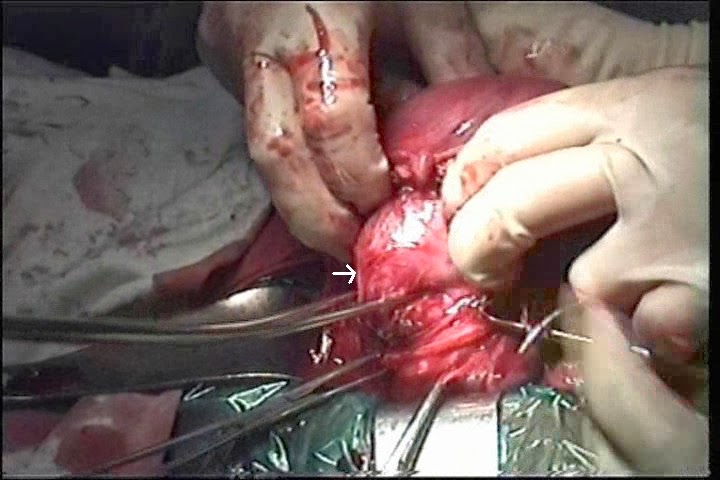 Figure 4. The leiomyoma is enucleated by dissection. 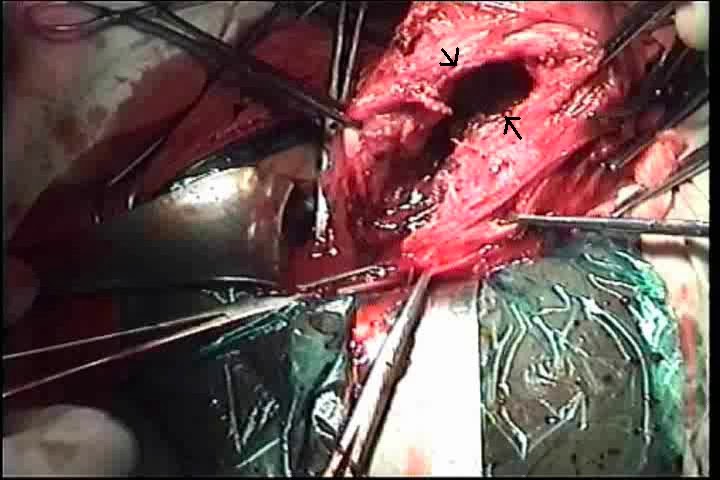 Figure 5. The bed of the leiomyoma is seen (arrows). 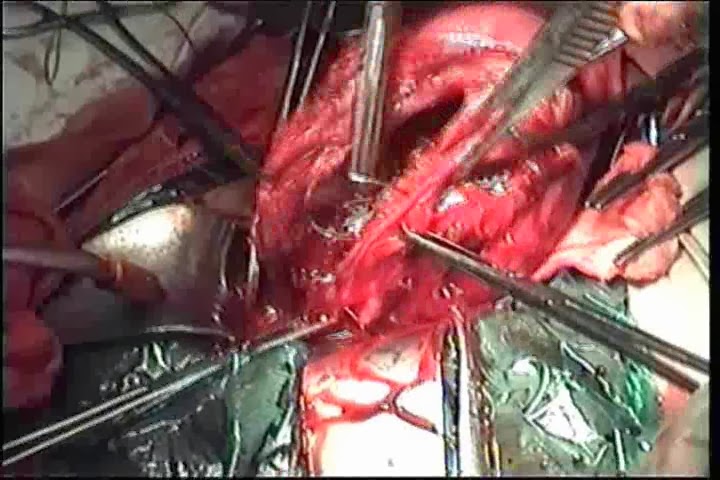 Figure 6. The bed of the leiomyoma is closed with interrupted sutures of No. 1 polyglactin. 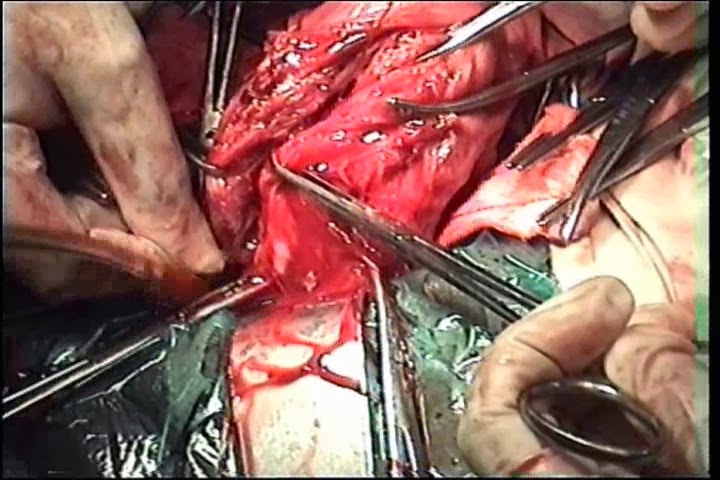 Figure 7. The bed of the leiomyoma is nearly closed. 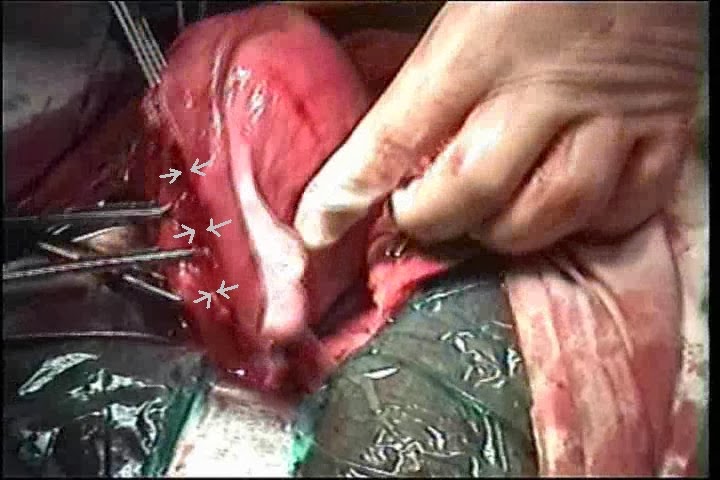 Figure 8. The suture line in the anterior broad ligament after its closure (arrows). 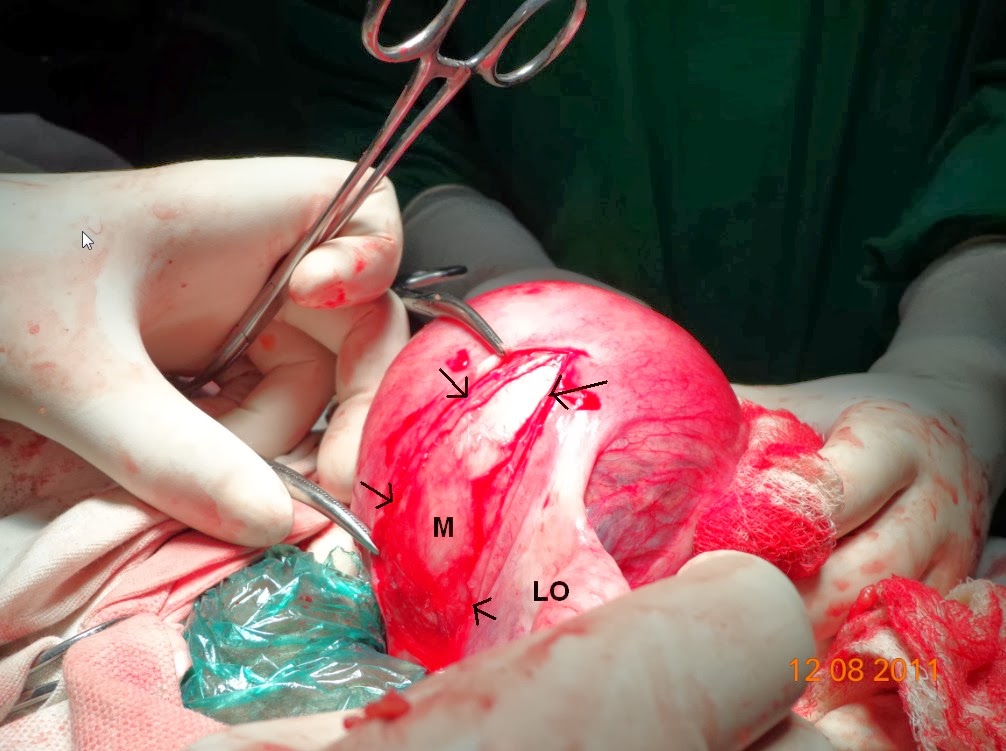 Figure 9. Right lateral view of the uterus with posterior wall leiomyoma (M). The left broad ligament has been opened by a longitudinal incision (arrows). The ovary (O) lies anterior to the incision. 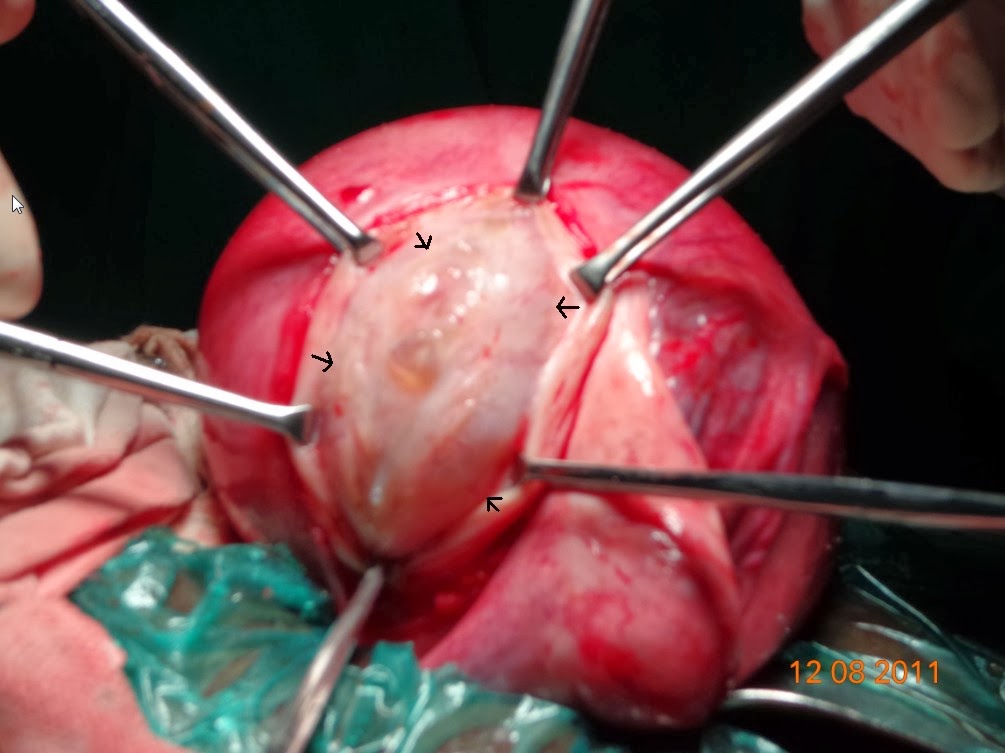 Figure 10. The leiomyoma (arrows) is exposed by making an incision in its pseudocapsule. 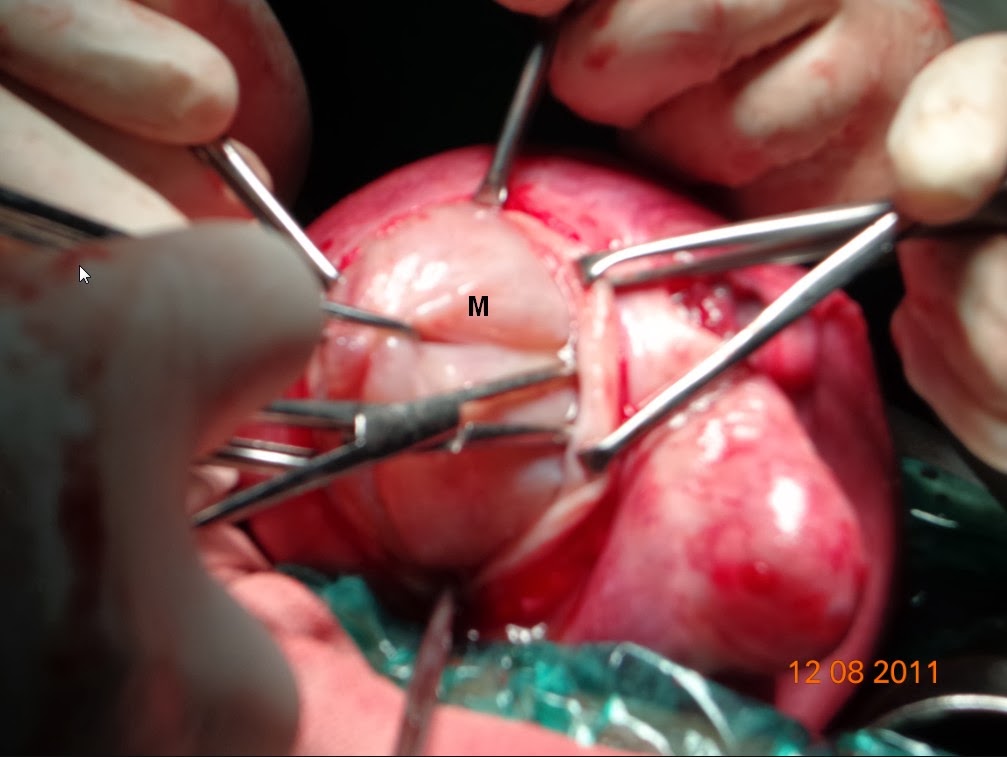 Figure 11. The leiomyoma (M) is separated by dissection. 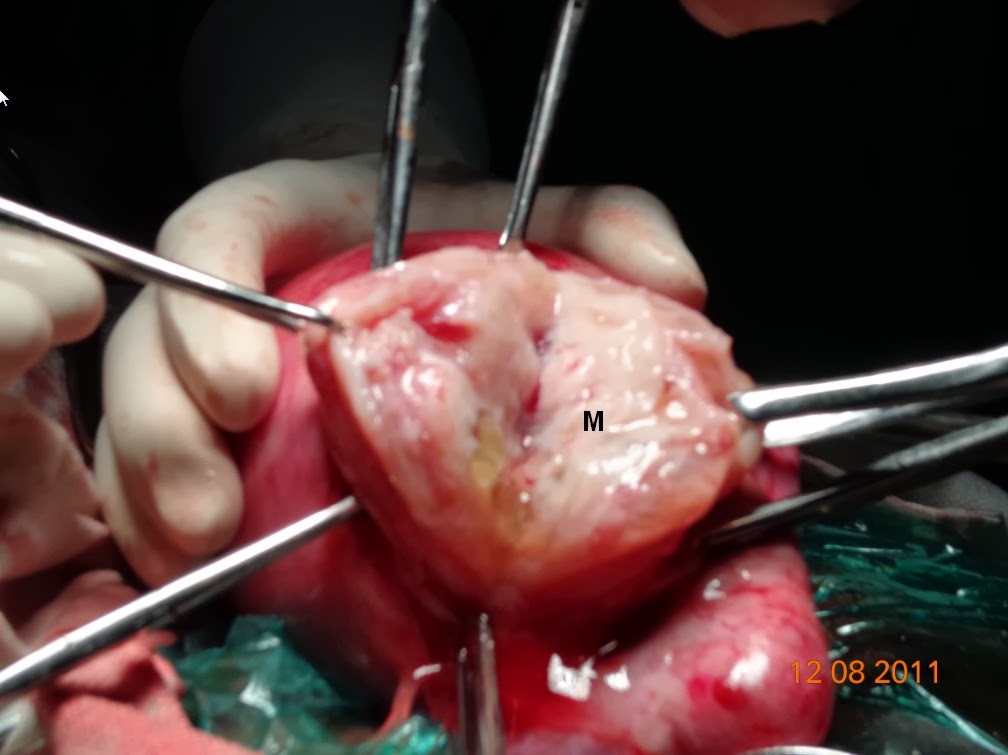 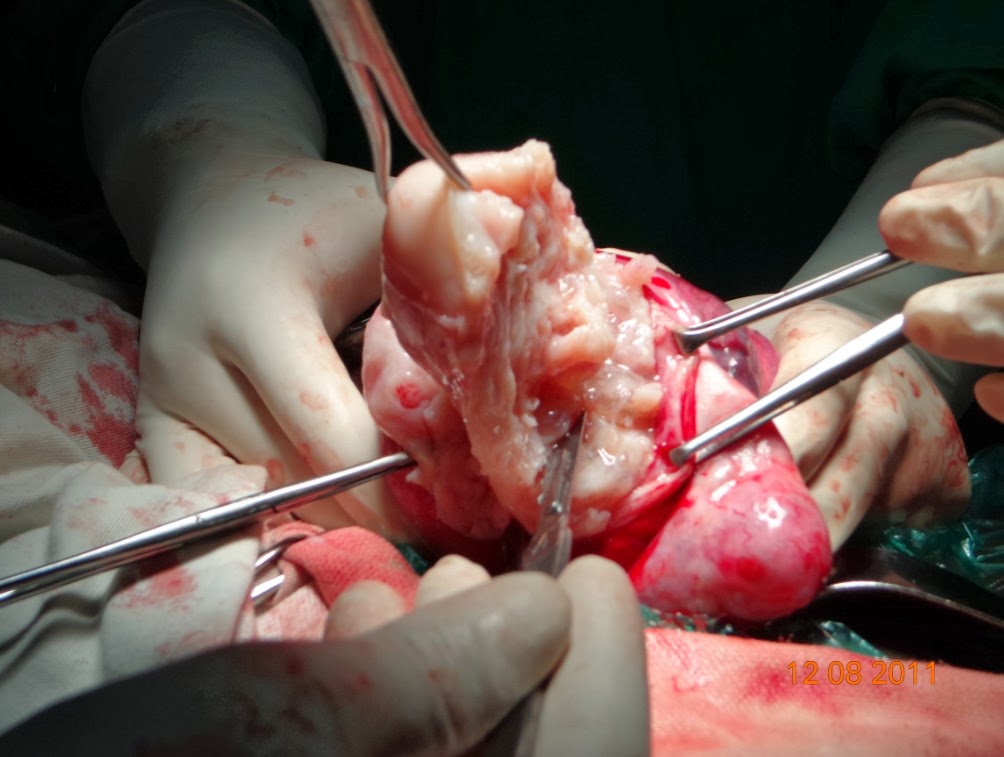 Figure 13. The leiomyoma is removed piecemeal by morcellation. 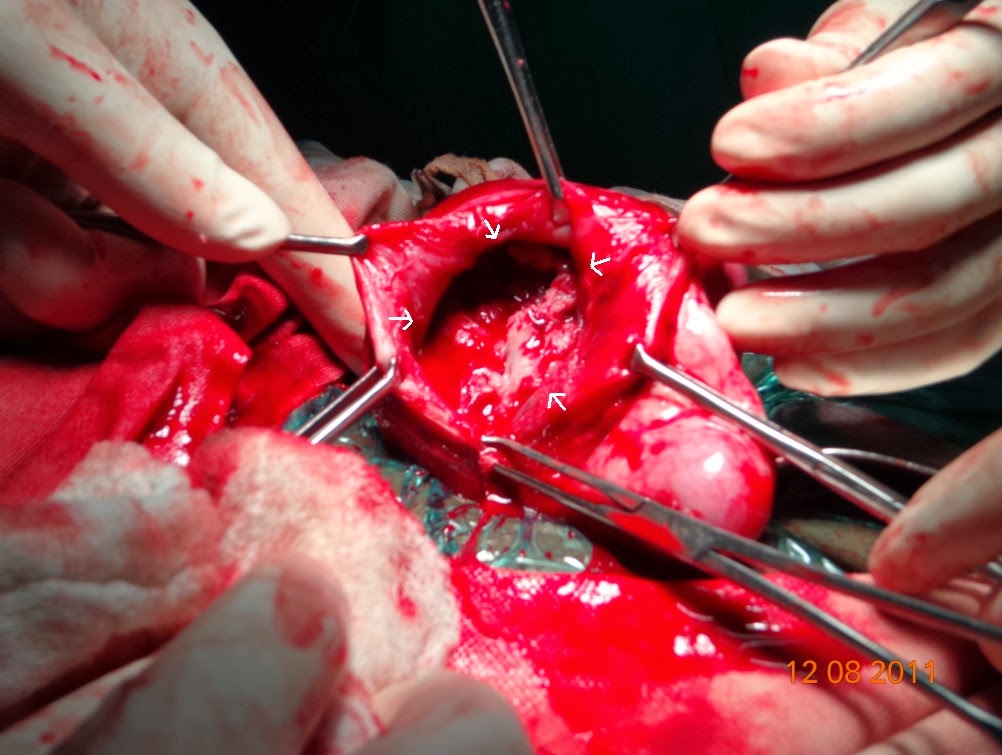 Figure 14. The bed of the leiomyoma is seen (arrows). 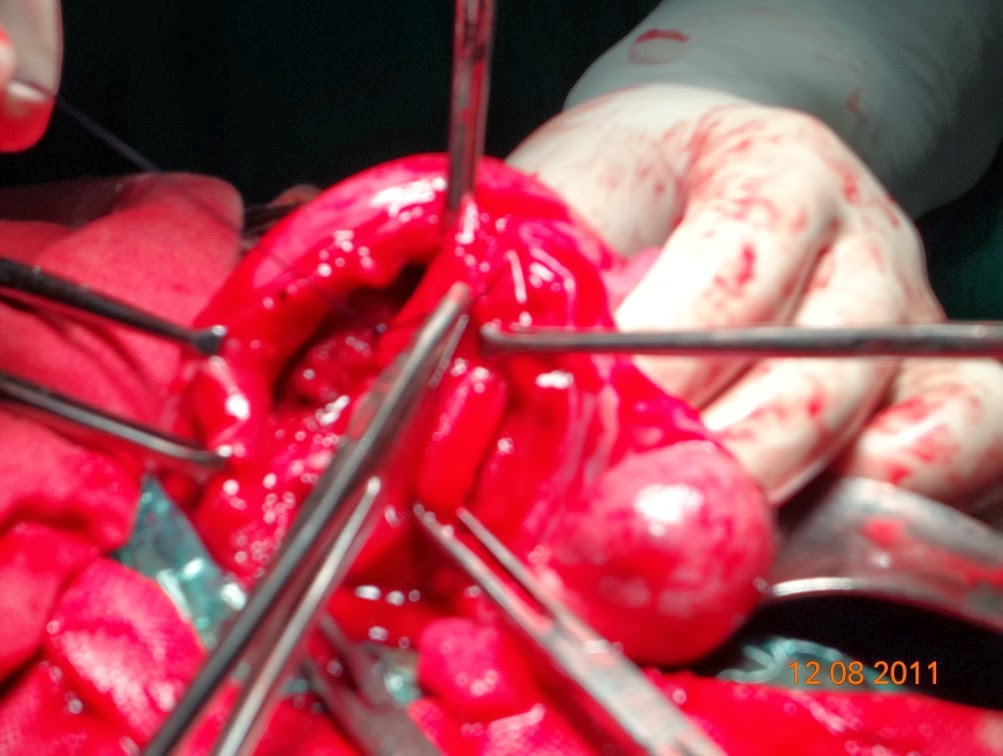 Figure 15. The bed of the leiomyoma is closed with interrupted sutures of No. 1 polyglactin. 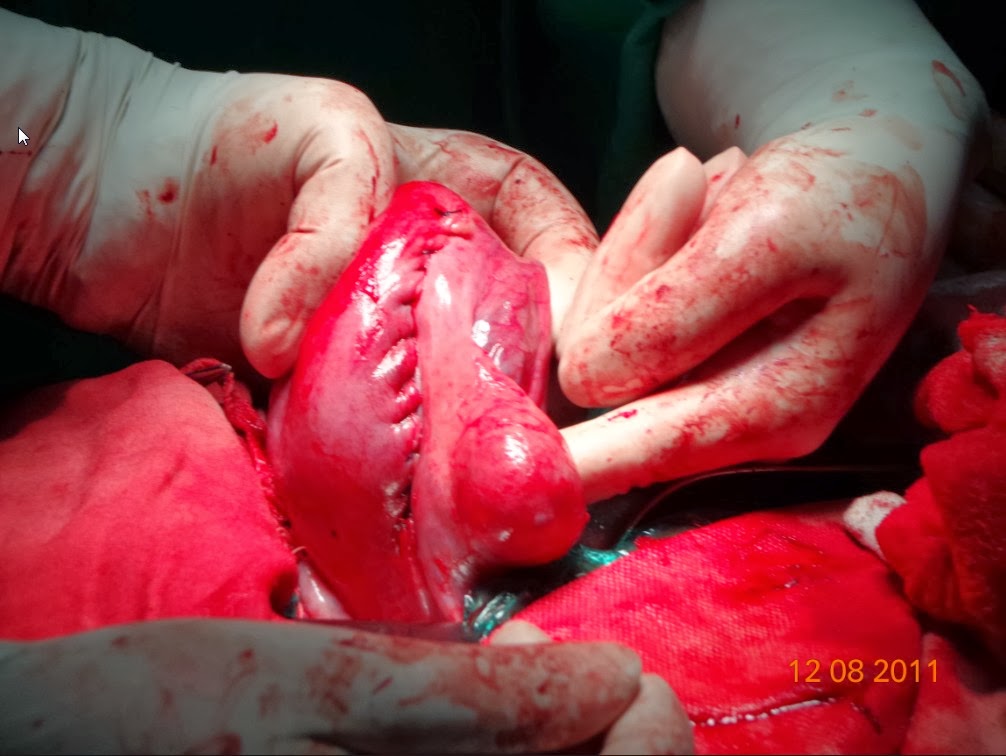 Figure 16. The incision in the broad ligament is closed with a continuous suture of No. 1-0 polyglactin. The suture line gets covered by the ovary when it falls back in place.

Making an incision in the posterior wall of the uterus is considered the worst option because the postoperative scar would be exposed to the general peritoneal cavity and would invite adhesions with bowel and/or omentum.[5,6,7] Unless the uterus is anteverted by plication of the round ligaments, it would get retroverted and perhaps get adherent to the rectum. An upper segment posterior uterine incision is managed by an elaborate and cumbersome technique called Bonney’s hood operation.[5,8] A low posterior uterine incision leaves behind a posterior scar which can result in a retroverted fixed uterus due to adhesions with the rectum. An anterior wall incision is less risky, because the scar would be somewhat covered when the round ligaments are shortened by plication. Still it is associated with the risk of adhesion to the lower anterior abdominal wall and sometimes the urinary bladder. [6,7]
An incision in the lateral wall of the uterus would avoid all such complications. This surface lies in the broad ligament and is extraperitoneal. As a result the scar would get covered by peritoneum when the broad ligament is sutured back. The lateral uterine wall is no more vascular than the anterior and posterior walls despite the proximity of the uterine vessels.[1] Hence a lateral incision is not associated with any increase in uterine bleeding during the operation. A leiomyoma which grows radially in all directions expands the lateral uterine walls sufficiently to permit placement of the uterine incision away from the uterine vessels. Thus there is no risk of injury to the uterine vessels. There is no risk of injury to the ureter as it lies below the level of the uterine vessels. The uterine myometrium is similar in all of its walls, and healing of a lateral wall incision is as good as that of an anterior or posterior wall incision. This is seen in the healing of the cesarean section incision, the lateral ends of which have sometimes to be extended into the lateral uterine wall. Blood supply of the uterus in the area of the incision is not impaired by a lateral incision any more than with anterior or posterior incisions, owing to the rich anastomoses between the vessels of the right and the lest sides, and between the uterine and ovarian vessels of each side.[9,10] This is supported by the fact that lateral uterine wall incisions made for removal of lateral wall leiomyomas heal as well as anterior or posterior wall incisions.
Lateral approach to myomectomy is not applicable if there are leiomyomas which are small and restricted to the anterior or posterior uterine walls away from the lateral walls, or if they are in the cervix. This approach should be applicable to laparoscopic myomectomy as well. In fact it could be easier than the conventional anterior or posterior approaches owing to the use of the lateral ports. However this author has no experience with laparoscopic myomectomy. Work needs to be done on that by a laparoscopic surgeon.
It is possible to use conventional anterior and posterior incisions and prevent postoperative adhesions by using oxidized regenerated cellulose barrier, polytetrafluoroethylene membrane, or bioresorbable membrane (sodium hyaluronate and carboxymethylcellulose).[11] However these substances are expensive, not readily available, and unnecessary when a lateral extraperitoneal uterine incision is used.

Lateral incision on the extraperitoneal part of the uterus for removal of large leiomyomas in the upper segment which grow radially is a technique that is easy, satisfactory and associated with absence of complications of adhesions of the intraperitoneal structures to the scar seen with anterior and posterior uterine wall incisions.