We report a case of heterotopic pregnancy, cervical-intrauterine, conceived with in-vitro fertilization. She was successfully managed with conservative systemic Methotrexate therapy.

A 43 year old woman, married for 12 years, gravida 2, abortion 1, with 7 weeks of gestation was referred to us in view of non-viable cervical ectopic and intrauterine pregnancy after in-vitro fertilization and embryo transfer. She had no complaints. Findings of diagnostic hysteroscopy and laproscopy done 10 years ago were normal. Findings with bilateral tubes patent and was started on treatment. She had conceived once with ovulation induction and intrauterine insemination. She developed a missed abortion for which dilatation and curettage was done. She underwent hysteroscopy and cervical dilatation five years later. Hysteroscopic findings were normal. Endometrial TB-PCR was positive for mycobacterium tuberculosis complex. She was treated with antitubercular therapy for 6 months. She then underwent ovarian hyperstimulation with long protocol, 6 embryo were retrieved of which 4 embryos were transferred. She conceived in the same cycle. She was started on progesterone support and low dose aspirin. Serum β-hCG level was 593 mIU/mL 15 days after the embryo transfer. After 6 weeks ultrasonography was done. It showed non viable twin gestation. Gestational sac 1 corresponding to 6.4 weeks was low lying in the uterus and gestational sac 2 corresponding to 5.4 weeks was located in the cervix. Then she was referred to our institute for further management. 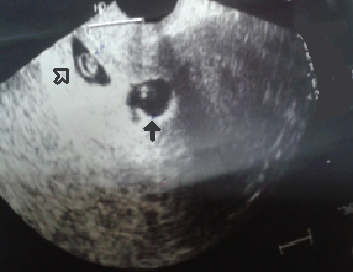 On examination her vital parameters were stable. Systemic examination showed no abnormality. Her abdomen was soft and non tender. On per speculum examination the external os was closed, the cervix was slightly enlarged. There was no bleeding. Bimanual pelvic examination was deferred so as not to disturb the cervical ectopic pregnancy. Serum β-hCG levels on admission was 54,112 mIU/ml. Hemogram , hepatic function and renal function tests were within normal limits.
Conservative management with Methotrexate administration was undertaken in an attempt to preserve her fertility. The regimen consisted of intramuscular Methotrexate 50 mg (1 mg/kg) on day 1, 3 and 5 and Folinic acid 5mg (0.1 mg/kg) on day 2, 4 and 6. The patient was monitored with serial β-hCG and ultrasound with Doppler flow.
Serial β-hCG levels

Ultrasonography showed a decrease in size of both gestational sacs and Doppler showed decreased peak systolic velocity. She was monitored for Methotrexate toxicity with complete blood count and hepatic function test. She was then discharged on day 15 with advised to follow-up with β-hCG level after one week or if she had any complaints like bleeding per vaginum or pain in abdomen. Subsequent menstrual periods were normal.

Heterotopic pregnancy is coexistence of intra- and extrauterine pregnancy. The prevalence is low in spontaneous pregnancy(1 in 30,000).[1] With the use of ovulation induction and assisted reproductive techniques; the incidence of heterotopic pregnancy has risen up to 0.75%-1.5%.[1]  As opposed to ectopic pregnancy which are diagnosed and treated at preclinical stage. Heterotopic pregnancies are often diagnosed after clinical symptoms and signs develop. Cervical- intrauterine is a rare variety of heterotopic pregnancy. Cervical ectopic pregnancy is uncommon and life threatening. The incidence reported occurring in 1 of 8628 deliveries.[2]  Its incidence is increasing as a result of in-vitro fertilization.[1]. The other predisposing factors include  cervical dilatation and curettage and previous cesarean section.
Cervical ectopic pregnancy is frequently confused with neoplastic growth or spontaneous abortion. Ultrasonographic diagnosis is useful in the early detection of cervical pregnancy. Ultrasonographic findings include the hourglass uterus or dilated cervix. Doppler flow sonography is helpful only in distinguishing abortions in progress from those with vascular implantation in the cervix.
Management of cervical ectopic is surgical or medical. Surgical management includes dilatation and curettage, in early cervical pregnancy or hysterectomy in uncontrolled, life-threatening bleeding,. Preoperative preparation  prior to dilatation and curettage to reduce vascularity  includes transvaginal ligation of cervical branch of uterine artery, Shirodkar cerclage, uterine artery embolization, or intracervical vasopressin injection. To control post evacuation bleeding, Foley catheter with a 30 ml balloon is inflated.  Medical therapy can be used as primary treatment for cervical pregnancy or adjunct to surgical treatment. It includes systemic Methotexate alone, systemic Methotexate with local  (intraamniotic or intracervical) injection of either Methotexate or potassium chloride.