Broad ligament lipoma is a very rare tumor. There are only 11 cases reported in the English world literature.[1,2,3,4,5] This is the first case reported in which the lipoma was removed vaginally.

A 58 year old postmenopausal woman presented with complaint of something coming out per vaginum for 6 months. She was found to have a third degree uterine prolapse, moderate cystocele and moderate rectocele. The uterus was small and the fornices were free. She was subjected to vaginal hysterectomy and repair of vaginal wall prolapse. During the operation, the right borad ligament was found to be bulging out after the uterosacral and uterine pedicles were clamped, cut, and ligated. The cornual structures of both sides were clamped, cut and ligated with No. 1 polyglactin, the clamp on the right side being applied medial to the broad ligament mass. Then the two leaves of the right broad ligament were separated. A well defined tumor measuring 7X4X3 cm was found in it, having the appearance of a lipoma (figure 1). It was dissected out of the broad ligament, taking care not to injure the ureter. There was no active bleeding from the bed of the tumoe after its removal. The pelvic peritoneal opening was closed with a purse-string suture of No. 1-0 polyglactin, leaving the right broad ligament partially open towards the vagina. The angles of the vagina were anchored to the pedicles of the uterosacral ligaments with No. 1 polyglactin sutures. The vagina was closed with No. 1-0 polyglactin sutures, leaving space for vaginal drainage of right broad ligament. The patient had no vaginal bleeding postoperatively. She made an uneventful recovery. Histopathological examination of the tumor showed it was lipoma. 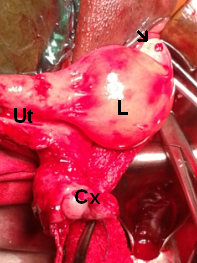 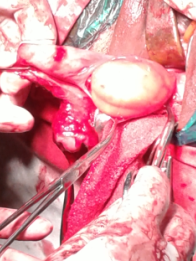 Figure 2. The broad ligament has been opened and the lipoma is seen being enucleated out. 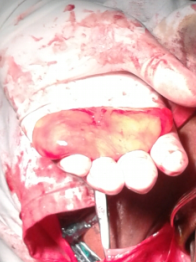 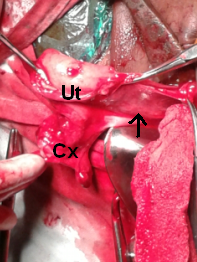 Figure 4. The uterine corpus (Ut), cervix (Cx), and right broad ligament (black arrow) are shown after removal of the lipoma.

Pelvic lipomas are exceedingly rare. They can arise from the iliac vessels and paravaginal tissues.[8] A lipoma is a soft tumor, and it may be missed clinically in broad ligament location when it is small to medium in size. In the case presented, it was not palpable on bimanual examination. No imaging of the pelvis was done because no indication was perceived. Otherwise the tumor can be diagnosed by ultrasonography, computed tomography (CT), or magnetic resonance imaging (MRI). As there are no significant optical differences between a lipoma and a well-differentiated liposarcoma on CT or MRI, observed prior to surgery between lipomas and well-differentiated liposarcomas, one has to be prepared to deal with the latter when undertaking removal of a lipoma in this location. If the tumor is coincidentally diagnosed at the time of a laparotomy or a vaginal hysterectomy for a different indication, prior awareness of the possibility of a sarcomatous nature should help in better surgical management of the tumor.  Vaginal dissection of the lipoma can be difficult, and should be undertaken only if the tumor is diagnosed during a vaginal hysterectomy, and that too in presence of pelvic tissue relaxation, as in this case. Otherwise it is a lot safer to abandon the vaginal approach and remove the tumor abdominally by the extraperitoneal route. The ureter has to be isolated prior to any dissection and safeguarded during the dissection. As these lipomas are known to recur and undergo malignant transformation, these patients require a close follow-up.

I thank Dr Anil Mirchandani for the operative photographs.