We report a case of endometrial stromal sarcoma which had a varied presentation. Initially patient was diagnosed and managed as a case of  incomplete abortion, but in view of persistence of symptoms, patient was subjected to further evaluation.  Histopathology along with imaging modalities like ultrasonography and magnetic resonance imaging helped to reach a diagnosis of endometrial carcinoma, which was managed with total hysterectomy with bilateral salpingo-oophorectomy.

A 31 yrs old woman,  second para married for 12 years, presented to a private practitioner for heavy bleeding for 2 days. On   speculum examination fleshy mass like structure was seen with bleeding and on vaginal examination the uterus was 10 weeks and cervical os was open. A probable diagnosis of incomplete abortion was made and emergency curettage was done. She was discharged the next day. The patient had similar complaints of heavy bleeding with passage of blood clots two weeks after the curettage for which she again visited the same private practitioner. On examination her clinical findings of speculum and vaginal examination were similar to the previous episode. In view of similar findings again a repeat curettage was performed and the fleshy material obtained was sent for histopathological examination. At this time after curettage her uterine size had regressed to 6 weeks. Histopathological report was suggestive of atypical cellular leiomyomatous polyp with  clear cell pattern, or possibly clear      cell carcinoma. In view of this histopathology report the patient was referred to tertiary care center.
On detailed history at tertiary care center patient gave a history of intermittent episodes of heavy bleeding for four months. She attained menarche at the age of 14 years and her past menstrual cycles were regular with average flows. She was married for 12 years and had undergone two cesarean sections in the past in both her pregnancies for obstetric indications. On general examination she had pallor. Her vital parameters were normal. On abdominal examination she had an infraumbilical vertical midline scar.  Speculum examination showed a 2x2 cm fleshy mass at the cervix. On vaginal examination the uterus was 10 to 12 weeks, anteverted and the fornices were free and non tender. Her hemoglobin was 6 g % for which she was transfused with two units of whole blood. Ultrasonography with color Doppler flows was done which showed uterine size of 10x8x7 cm with an endometrial thickness of 4 cm in the center  and arterial peak systolic velocity of 0.35-0.2  per centimeter per second and there was no evidence of arterial-venous malformation. Histopathology slides were reviewed which were suggestive of “PEComa” (Perivascular epitheliod cell tumour) as shown in figure 1. Immunohistochemisty study was advised for confirmation. but was deferred as patients was not affording. Magnetic resonance imaging  was done. It was suggestive of bulky uterus with thickened endometrium, with loss of   endo-myometrial  interface, with no lymphadenopathy  and  preservation of fat planes. These findings were suggestive of neoplastic etiology.
In view of above findings total abdominal hysterectomy with bilateral salpingo-oophorectomy was performed. On cut section the specimen showed a polypoidal growth which was occupying the entire endometrial cavity and was encroaching on the myometrium (figure 2). Her histopathological report obtained from the uterine specimen was suggestive of   endometrial stromal tumor (figure 3). Her postoperative course was uneventful and she was discharged on day 7. She was referred to oncology center where her slides were reviewed and in view of same histopathological diagnosis she did not require any further management and was advised  regular follow up. 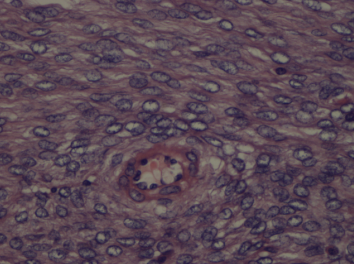 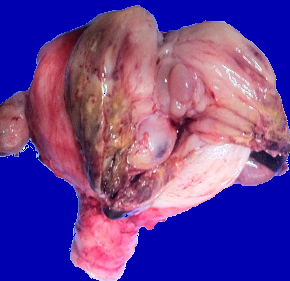 Figure 2. Cut section of the specimen. 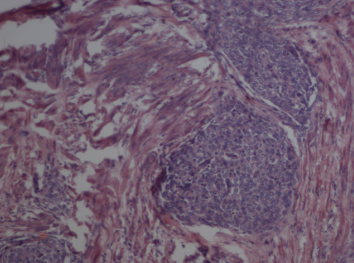 Uterine sarcomas are the most malignant group of uterine tumors and differ from endometrial cancers related to the diagnosis, clinical behavior, pattern of spread, and management. The three most common histologic variants of uterine sarcoma are endometrial stromal sarcoma (ESS), leiomyosarcoma, and malignant mixed müllerian tumour (MMMT) of both homologous and heterologous type.[4] In general, leiomyosarcoma and MMMT each make up about 40% of  tumors, followed by endometrial stromal sarcoma (15%) and other sarcomas (5%). Endometrial stromal tumors are a variety of homologous type of pure nonepithelial tumors and are composed purely of cells resembling normal endometrial stroma. They are further categorized  into three types on the basis of mitotic activity, vascular invasion, and  prognosis. They are (i) endometrial stromal nodule (less than 5 mitotic figures per 10 high-power microscopic field ), (ii) endometrial stromal sarcoma ( mitotic rate of less than 10 MF/10 HPF)  and (iii) high-grade or undifferentiated sarcoma ( greater than 10 MF/10 HPF). The traditional classification of ESS into low-grade and high-grade categories is now changed to endometrial stromal sarcoma for previous low grade endometrial stromal  tumors (LGESS)  and undifferentiated endometrial sarcoma is used for previous high-grade endometrial stromal sarcoma (HGESS).[5] The World Health Organization defines perivascular epithelioid cell tumors (PEComas) as "mesenchymal tumors composed of histologically and immunohistochemically distinctive perivascular epithelioid cells (PECs)"  which have a marked female preponderance, the uterus is the commonest site  and  is often mistaken for leiomyomatosis.[6]
The most frequent symptom is abnormal uterine bleeding, abdominal pain and pressure caused by an enlarging pelvic mass but 25% of them are asymptomatic. The usual preoperative diagnosis is uterine leiomyoma, but the confirmatory diagnosis is established after endometrial biopsy. On gross examination there is nodular growth involving the endometrium, myometrium, or both, which is associated with varying degrees of permeation of the myometrium, including worm-like elastic extensions of tumor into myometrial  veins and may extend into parametrial veins and lymphatics. Microscopically there is   only mild  nuclear atypia with mitotic activity of 5 MF/10 HPF and rarely there is necrosis. Immunohistochemistry  helps in the detection of tumor markers specific for endometrial stromal tumor, which is CD10, which  helps in distinguishing these tumors from histologically mimicking tumors like cellular leiomyoma which are CD 10 negative.[7] However, the role of CD10 for a preoperative diagnosis is not well established. Other immunomarkers such as oxytocin receptors, h-caldesmon, desmin, CD10, and inhibin are useful in distinguish between cellular leiomyoma and ESS. Leiomyoma expresses oxytocin receptors,  h-caldesmon, desmin while  ESS expresses CD10 and inhibin. Immunohistological studies shows that ESS is almost always positive for both estrogen and progesterone receptors and the standard surgical treatment recommended is total hysterectomy, with bilateral salpingo-ophorectomy. Hormone replacement therapy is contraindicated postoperatively.[8] The retained adnexae increases the risk of tumor extension into the parametria, broad ligaments, and adnexal structures due to the stimulating effect of estrogens  from retained ovaries on the tumor cells. ESS usually behaves in an indolent clinical fashion; however recurrences and distant metastases can occur. Radiation therapy is recommended for inadequately excised or locally recurrent pelvic disease.[9] Recurrent or metastatic lesions may also be treated by surgical excision. Prolonged survival as well as cure is common despite the development of recurrent or metastatic disease.