Obstructed Labour Due to a Giant Fecolith

Introduction
Fecolith is fecal impaction in the rectum and colon. It causes significant patient morbidity.[1] Patient commonly complaints of constipation. It is frequently secondary to poor bowel or dietary habits.[2] Bladder stone and rectal fecoliths have been implicated as cause of soft tissue dystocia.[3,4]

A 22 years old married woman, G4P3L1 IUFD2 with 26.5/7 weeks with IUFD with previous  LSCS was referred to our hospital with complaints of leaking per vaginum and decreased fetal movements since 12 hours. She had not passed stool since 5-6 days. There was  no history of bleeding per vaginum or pain in abdomen. On presentation her general and systemic examination were normal. Abdominal examination revealed a pfannensteil scar of previous LSCS, uterus was 26 weeks in size, deviated to right side, subserosal fibroid measuring 3x4 cm was felt in the suprapubic region and FHS was absent. Vaginal speculum could not be introduced due to a mass impacted in the vagina. On vaginal (PV) examination a 10x9 cm mass impacted in the vagina was felt. Cervix could not be felt. Provisional diagnosis of a 26 weeks pregnancy with IUFD with a large cervical fibroid or rectal mass was made.
On ultrasonography (USG) a dead fetus in transverse lie with extensive flexion of its body with spalding sign was seen. There was no free fluid in abdominal cavity and uterine rupture was ruled out. Uterine part of cervix could not be assessed on ultrasonography. CT scan was done. It showed a grossly distended rectum, descending and transeverse colon. Rectum and sigmoid colon were extensively loaded with faeces which appeared to be compressing the lower part of the uterus, cervix and vagina. 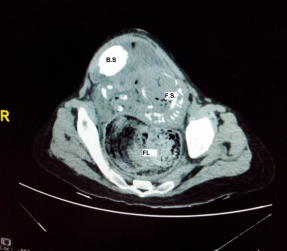 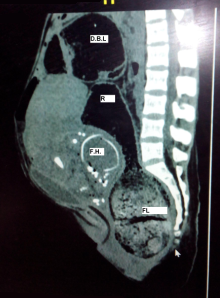 A 4.7 x 3.1 cm sized calculus was noted in the urinary bladder. Right kidney was 12.3 x 5.7cm and left kidney was 5.6 x 3.2 cm. There was bilateral hydronephrosis and hydroureter.
Final diagnosis on CT scan was IUFD with transverse lie, fecal impaction, urinary bladder calculus, bilateral hydronephrosis and hydroureter .
Her Hb was 11.1gm%, WBC, platelet counts and DIC profile were within normal limits. Enema was given. There was incomplete evacuation of the bowel. Cervical Os could now be reached with difficulty. On PV she was 2-3cm dilated, 60% effaced, station was high up, pelvis was adequate and an indentable fecolith was felt through the posterior vaginal wall.
We watched for progress of labour. After 4 hours she developed signs of obstructed labour with scar tenderness and impacted shoulder with hand prolapse.
Patient was taken for emergency hysterotomy and anal dilation with manual removal of the fecolith with suprapubic cystolithotomy. A multidisciplinary team approach involving gynaecologist, surgeons, and anesthesiologists was undertaken. Abdomen was opened through an infra-umbilical midline incision. Intraoperatively bladder was advanced and distended with a calculus of  5x4cm size. Sigmoid and transverse colon were loaded and markedly distended with stools. Lower uterine segment was thinned out. Female baby of 780 g was delivered by breech extraction. Liquor was scanty and placenta was foul smelling. The uterus was sutured in a single layer.
Lithotomy position was given and surgeons noted a fissure in ano at 7 o’clock position, stricture 2-3cm from anal verge and grossly dilated sigmoid colon loaded with hard stools. Anal dilatation and manual removal of feces was done. Colon was milked from descending colon up to rectum and feces were evacuated till colon completely collapsed. Bowel was inspected and there was no evidence of any stricture, serosal tear or perforation.
The vesical calculus of 5x4 cm was removed by a cystotomy. Midline suprapubic catheter was placed and bladder was closed in two layers. Abdomen was closed in layers. One unit blood transfusion was given. Postoperatively patient was given antibiotics, analgesics. Postoperative course was uneventful. Suprapubic catheter was removed after three weeks.

Prolonged stasis of fecal matter causes impaction and a giant fecolith forms. This obstructs the colon necessitating surgery. [1]  Direct abdominal x-rays, ultrasosnography and CT scans are the imaging modalities to diagnose intestinal obstruction caused by fecal impaction. Emergent surgical intervention and removal of fecolith is life saving.[5] Urolith causing dystocia requires  caesarean section with cystolithotomy .[3] In this case, fecolith caused the malpresentation (transverse lie) and obstructed labor. As the urolith was not in the pelvis but suprapubically it did not contribute to the obstructed labor. A timely emergency hysterotomy with anal dilation, manual removal of feces, milking of descending, sigmoid colon and suprapubic cystolithotomy prevented a neglected obstructed labor and its consequences.[1,2,3,4,5] In this case the giant fecolith leading to obstructed labour was not diagnosed by the referral secondary care center. It was erroneously diagnosed as a large posterior cervical fibroid. In cases with obstructed labour with a mass felt per vaginum, large fecoliths should be considered in the differential diagnosis. Multidisciplinary team approach is essential for management of such cases.

We acknowledge Mantri Nilima, Tiruke Raviraj and Chaturvedi Pritali for performing emergency hysterotomy; Jadhav Sudhir and Patel Maitri for removal of fecolith; and Gajingi Ajay and Sharma Anand for performing suprapubic cystolithotomy on this patient