Prolapse of the fimbria of the fallopian tube is a rare complication of hysterectomy. It can be confused for simple conditions like vault granulations and serious conditions like recurrent cancer in the vaginal vault. Owing to its rarity, it is being omitted from modern textbooks of gynecology. We present a case of posthysterectomy fimbrial prolapse to bring about awareness of its existence once more.

The incidence is  less than 1% of all hysterectomies, and much lower in better centers. Though it is a benign condition, failure to diagnose it in time and treat it appropriately may prove quite harmful to the patient. The condition was over diagnosed in the past, and most of the cases turned out to be vault granulations. As a result, the condition is being omitted from the modern textbooks of gynecology. Future generations of doctors may not even learn of it until they actually encounter a case, treat it as a case of vault granulations and have catastrophic results. We present this case to bring about awareness of its existence once more.

A 45 year old woman presented at our tertiary level care center with a complaint of left iliac fossa pain for a period of one month. The pain was dull and dragging. She had had three normal vaginal deliveries in the past, and had undergone a total abdominal hysterectomies one year ago for abnormal uterine bleeding. Details of the operation including histopathology report of the specimen were not available, except that the recovery after the operation had been uneventful. There was no history of fever, low  backache, leucorrhea, postcoital bleeding or dyspareunia in the last one year. Her vital parameters were within normal limits. General and systemic examination revealed no abnormality. A speculum examination showed a 3x2x1 mm pink fleshy mass near the left angle of the vault of the vagina. There was no space between the lesion and surrounding vagina. This lesion did not bleed to touch during the process of obtaining of a Pap smear. Bimanual pelvic examination revealed no pelvic mass. In order to distinguish between a vault granulation, fimbrial prolapse, and a primary or recurrent malignant lesion (after an abdominal hysterectomy, which could have been done for a uterine malignancy), traction test was performed. The lesion was gently held with sponge holding forceps and gentle traction was done on it. It reproduced the pain that she had been experiencing in the last one month. So a diagnosis of fimbrial prolapse was made. An excision biopsy of the lesion followed by reposition of the tubal stump into the peritoneal cavity and repair of the opening in the pelvic peritoneum and vaginal vault was planned. Unfortunately the lesion came off when held with a sponge holding forceps. No opening could be found in the vault from where the residual fallopian tube could be dissected out. There was no active bleeding from the vault. Considering that the vault had been closed by fibrosis around the prolapsed fimbria, it was decided to observe the woman for development of any symptoms. She remained well. Her pelvic pain disappeared too.
Histopathological examination showed a fallopian tubal structure with typical histology. The tubal mucosa was composed of glands lined by pseudo stratified ciliated epithelium. Prominent cilia were seen. Lamina propria and bundles of smooth muscle fibers of the fallopian tube were seen surrounding the glandular epithelium. Dense mixed inflammatory infiltrate composed of lymphocytes, plasma cells, few neutrophils and histiocytes were seen. Many proliferating capillaries were also seen. No nuclear atypia or malignant changes were seen in the glandular epithelium and mucosa. The presence of prominent cilia and few bundles of smooth muscle fibers of the fallopian tube clinched the diagnosis of prolapsed fallopian tube into the vaginal vault. 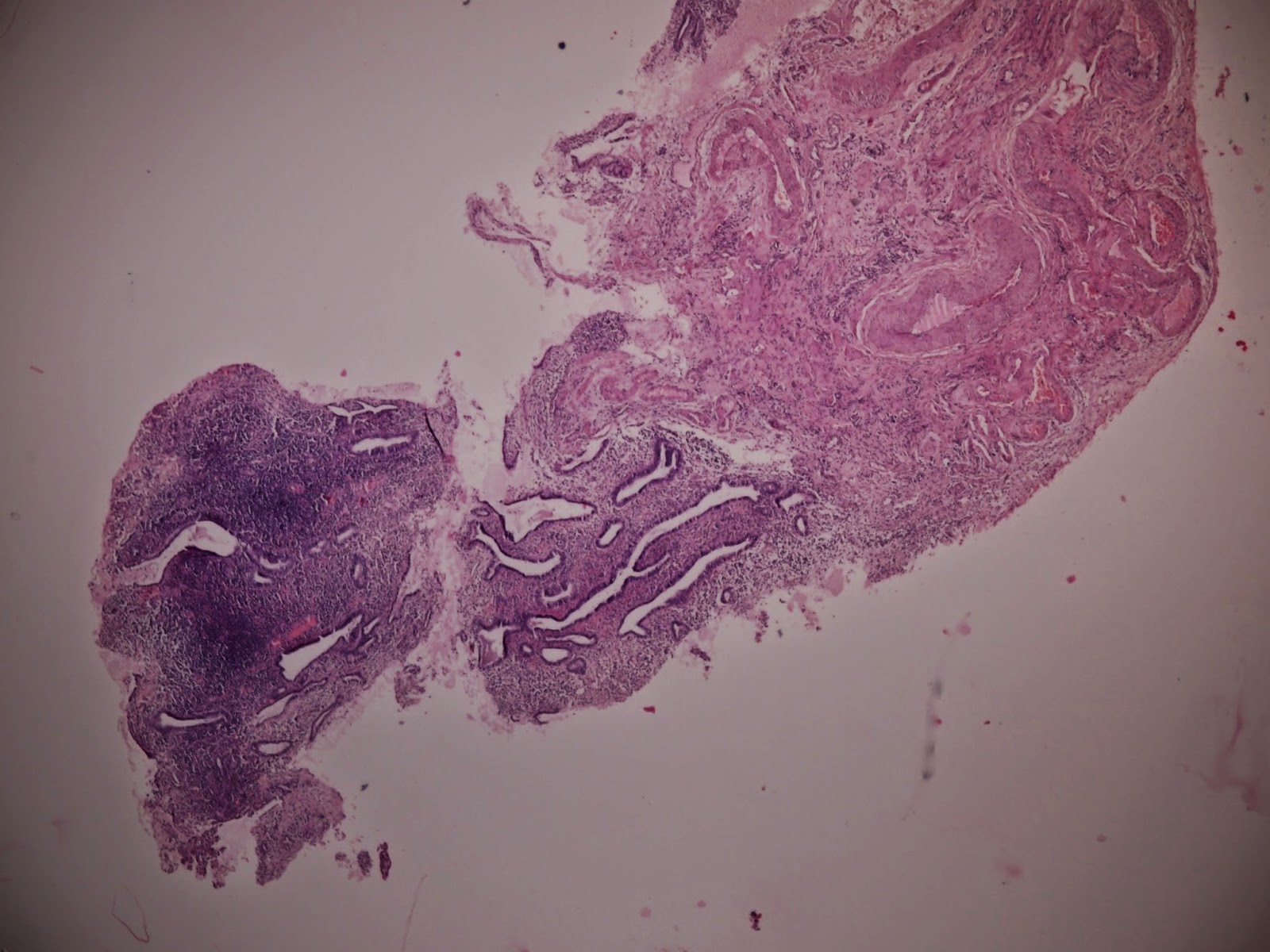 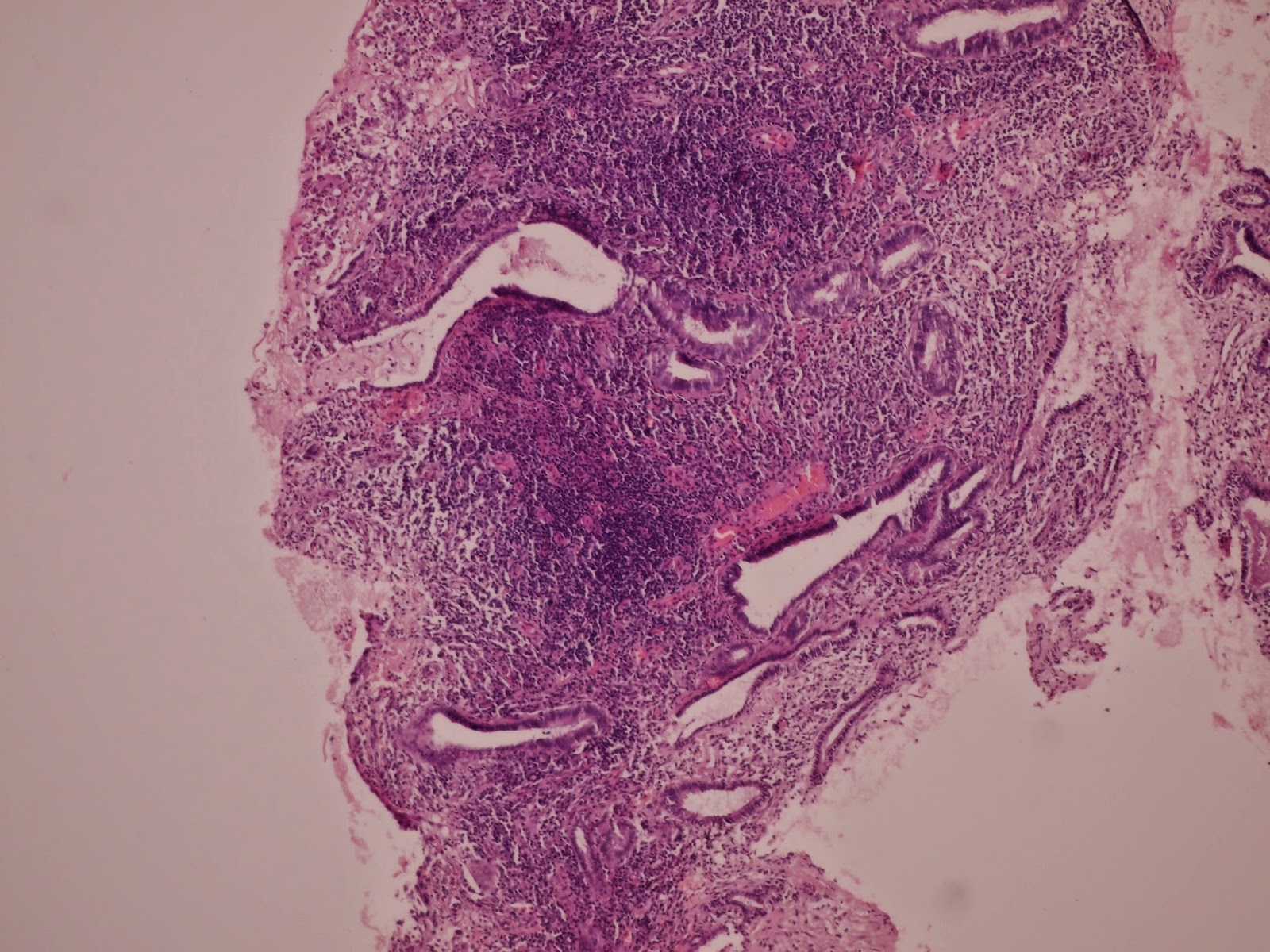 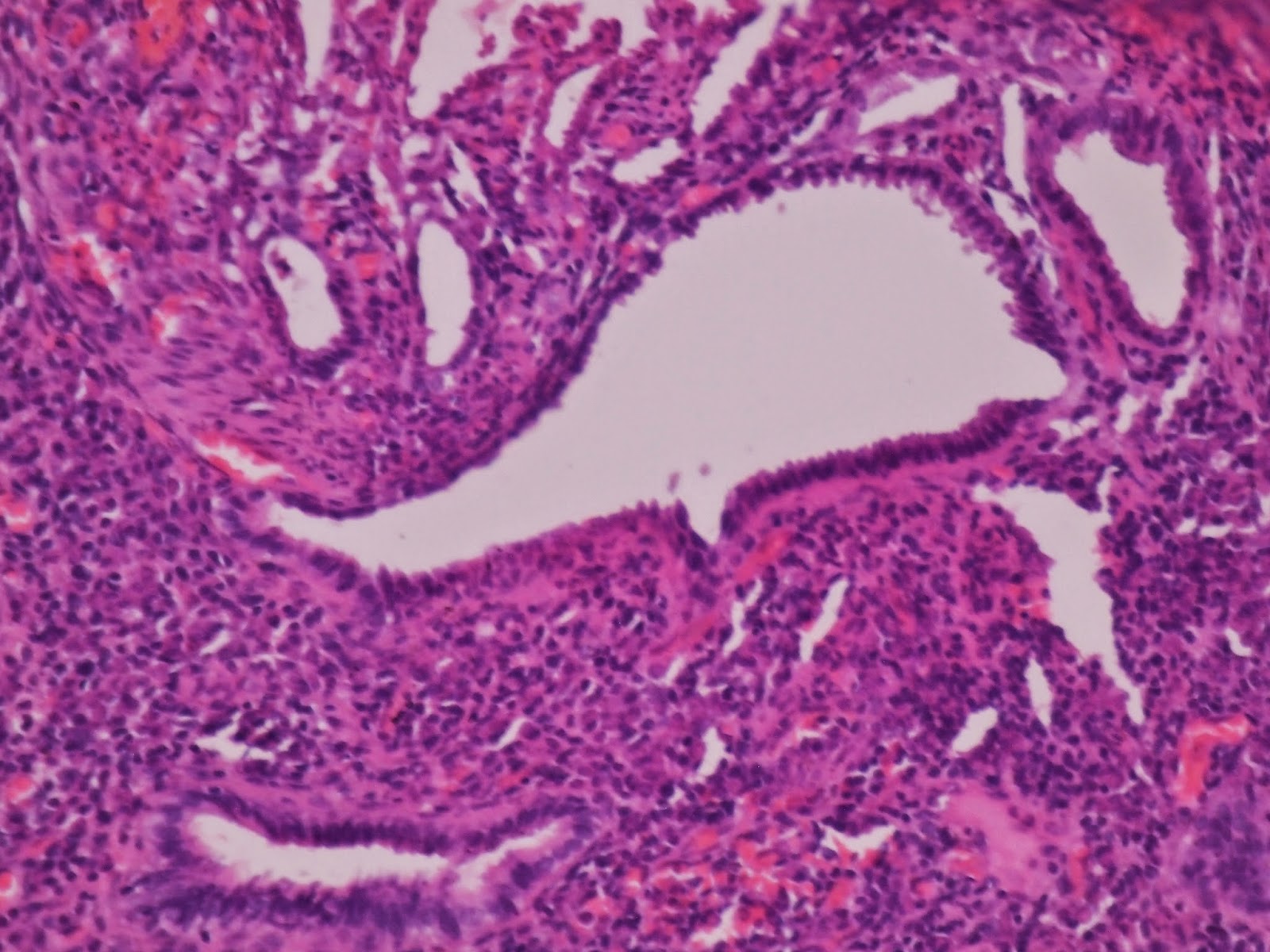 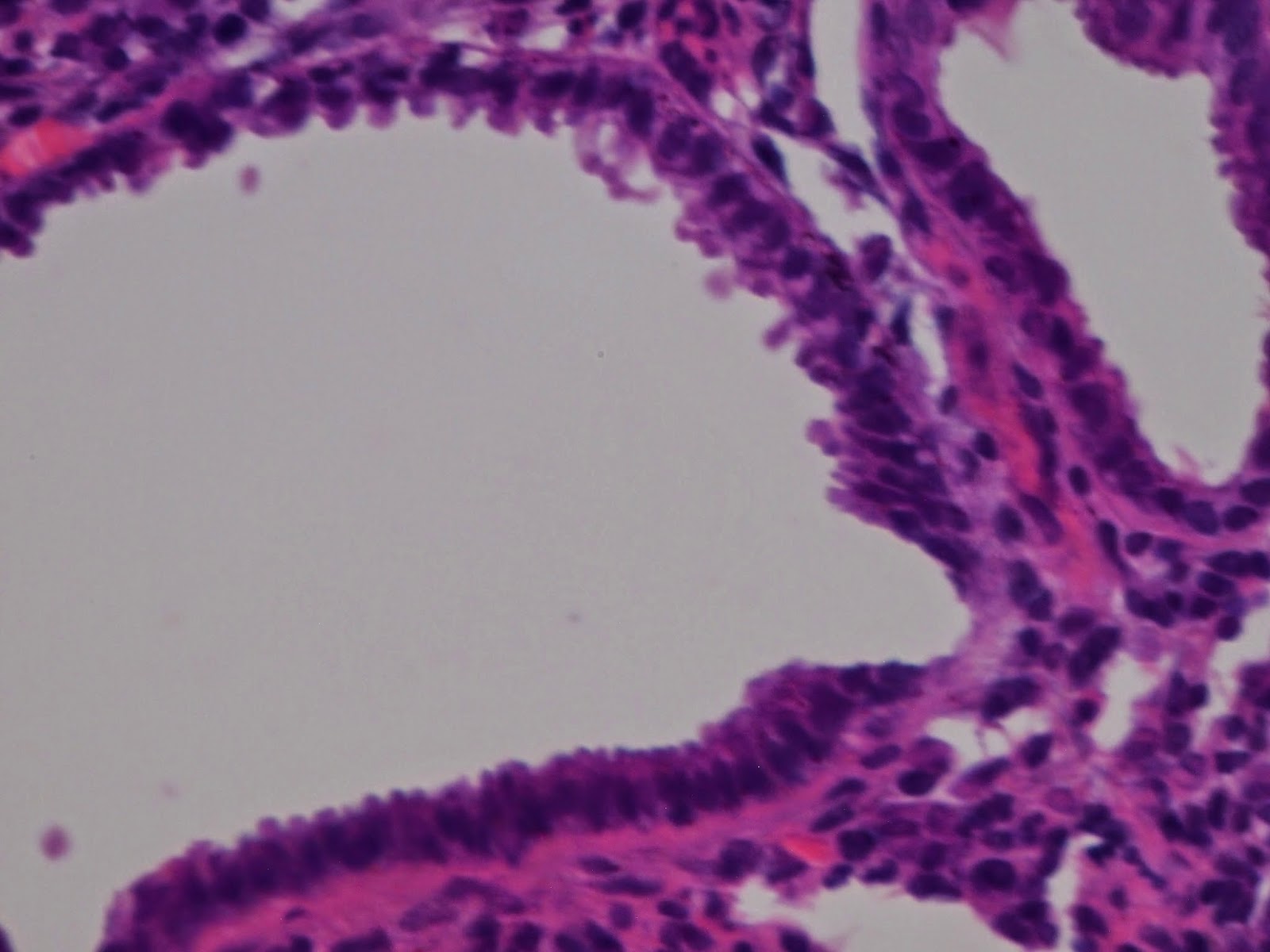 Prolapse of the fimbria of the fallopian tube is a rare complication of hysterectomy. The incidence is said to be 0.5% with vaginal hysterectomy, 0.06% with abdominal hysterectomy, and 0 with laparoscopic hysterectomies.[1] Another series of 8444 hysterectomies showed an incidence of 0.2%, being equal after vaginal and abdominal hysterectomies.[2] Pozzi reported this condition for the first time in 1920.[3] All subsequent reports are of a few cases each, because of the rarity of the condition. Risk factors for development of this condition include low socio-economic status, postoperative formation of hematoma and/or infection of the vault, and an open vaginal cuff.[2]  The case reported by us is the first in 32 years in our experience, and that too where the primary operation had been done at another center. The low incidence might reflect meticulous closure of the pelvic peritoneum and the vagina separately, prevention of formation of a vault hematoma by achieving hemostasis prior to the closure and low incidence of vault sepsis. Another reason for the low incidence could be the practice of not fixing the vault to the cornual pedicles, which keeps the tubes away from the vault. The reason for adopting this practice was that the cornual structures could not support the vault anyway, and fixing the ovaries so close to the vault would possibly lead to collision dyspareunia. Low incidence of fimbrial prolapse could be a coincidental benefit of this practice. The mean time interval between the hysterectomy and development of fimbrial prolapse is about four months, and the longest reported interval is 32 years.[4] This suggests that the patient has a peritoneovaginal fistula after the operation, and chronic increase in the intraabdominal pressure results in extrusion of the tubal fimbriae through the fistula. The patients present with pelvic pain, vaginal spotting, leucorrhea and dyspareunia, though they may be asymptomatic too. The diagnosis can be made by traction test, in which the lesion is held with sponge holding forceps and gentle traction is made on it.[5] If it is prolapsed fimbria of the tube, the traction gets transmitted to the fallopian tube above the vault and causes the same pain that the patient has been experiencing due to the fimbrial prolapse. If it is vault granulation or a primary/recurrent cancer, the held portions gets detached easily and painlessly. This tissue can be examined histologically and its nature determined. Pap smear of the vault shows small ciliated columnar cells with prominent nucleoli. Since presence of columnar cells is very rare in the vault, a wrong diagnosis of a malignancy may be made.[6] Histology shows intact fimbrial structures covered with columnar epithelium. It is often misdiagnosed as adenocarcinoma because of the glandular architecture and associated inflammatory atypia. However, a history of prior hysterectomy, location of the lesion in the apex of the vagina, superficial ulcerated lesion with an appearance of granulation tissues are important to note for making the diagnosis.[7] Histopathology leads to a definitive diagnosis. The presence of cilia, architecture of the fallopian tube and few bundles of smooth muscle fibers help to clinch the diagnosis of prolapsed fallopian tube.  Another helpful feature that aids the diagnosis is the presence of dense inflammatory infiltrate in the lamina propria surrounding the glands. Awareness of this lesion and careful histopathological examination is important to avoid misdiagnosis of adenocarcinoma of vaginal vault. Prolapsed fallopian tube needs to be mainly differentiated from adenocarcinomas, primary and metastatic, endometriosis, cysts of the mesonephric and paramesonephric ducts and vaginal adenosis.[8] However their appearance is distinct and they should not be confused for a fimbrial prolapse. A ureterovaginal or vesicovaginal fistula also cannot be mistaken for a fimbrial prolapse because of the associated leak of urine. Immunohistochemistry using pankeratin antibodies is useful in identification of fimbria when in doubt.[9] A fimbrial prolapse is managed by making an incision in the vault all around it, delivering a part of the tube into the vagina, and excising it. The ligated stump of the tube is then reposited into the pelvic cavity carefully and the opening in the pelvic peritoneum and the vault of vagina is closed carefully to prevent a recurrence of the prolapse of the tube or development of pelvic peritonitis by spread of bacteria from the vagina to the peritoneal cavity.[10,11,12] Electrocauterizing the prolapsed fimbria thinking it to be granulation tissue may prove catastrophic, as the current may spread to the pelvic portion of the tube and to bowel if it lies in close proximity to the tube.