A Leiomyoma Which Won’t Enucleate

Endometrial stromal sarcoma is a very rare malignant tumor of the uterus. Usually it is mistaken for a uterine leiomyoma clinically, and the diagnosis is usually made after surgical removal. We present a case that was suspected during myomectomy and was managed by hysterectomy. Histopathology confirmed the diagnosis.

Endometrial stromal sarcoma (ESS) is a very rare malignant tumor of the uterus. It accounts for about 0.2% of all uterine malignancies. Usually it is an intramyometrial tumor, and cannot be diagnosed clinically. Its presence can be suspected by imaging preoperatively. We present an unusual case that presented as a submucous polyp in the uterine cavity. This diagnosis was suspected during a failed attempt at myomectomy, and was confirmed by histopathology later.

A 42 year old woman with two term deliveries in the past presented with abnormal uterine bleeding for four months. She had prolonged and excessive blood loss during menstruation and in between menses too. Her past menstrual cycles had been regular and with moderate flow over 3 to 4 days. Her last delivery had been 10 years ago. She did not use any contraception. General examination showed moderate pallor. Her vital parameters were normal. Systemic examination showed no abnormality. Gynecological examination showed uterus enlarged to a size of about 12 weeks of gestation. The cervix was 2 cm open, 30% effaced. The vagina was normal. There were no pelvic or abdominal masses. Abdominopelvic ultrasonography (USG) showed a 6.5 cm diameter polypoid mass arising from the anterior wall of the endometrial surface of the uterus. There was no lymph node enlargement or hepatic metastasis. Her blood sugar level, hepatic and renal function tests, chest radiograph and electrocardiogram were normal. Her hemoglobin level was 6 g/dL. She was transfused 4 units of packed cells over 4 days. Polypectomy was undertaken under general anesthesia. The posterior cervical wall was cut in the midline up to the internal os, so as to enable enucleation of the polyp. The mass was spherical, more than 75% of it projecting into the uterine cavity. There was no pedicle. The mass was held with a tenaculum and a vulsellum. Its capsule was bluntly dissected by digital pressure and attempt was made to dissect and enucleate it from its bed (figure 1). That attempt failed. Its removal was attempted by holding it firmly and twisting it clockwise. However it delivered piecemeal and could not be delivered in its entirety. There was no bleeding from the mass left behind. A diagnosis of a degenerated leiomyoma or a tumor like an ESS was made, the reason being the inability to enucleate it despite ease of access. After closure of the cervicotomy, the patient started bleeding vaginally, though not from the cervical os. A uterine wall injury could not be ruled out. So an abdominal hysterectomy was done. There was no uterine injury. The bleeding was from a cut edge of the cervicotomy incision, which had not been diagnosed before. There was no spread of the disease to the omentum, bowel, parietal peritoneum, pelvic or paraaortic lymph nodes and liver. About one-third of the mass was seen to be left behind, when the uterus was opened after the hysterectomy (figure 2). The patient made an uneventful recovery.
Gross examination showed full thickness involvement of the myometrium by the tumor, but serosa was intact.Histopathology of the tumor (figures 3-6) showed sheets and tongues of neoplastic endometrial stromal cells extensively invading the full thickness of the myometrium. The serosa was intact. The tumor cells were monotonous in appearance, oval shaped, with basophilic mildly atypical nuclei and scanty cytoplasm. A prominent delicate arborising vasculature was seen throughout the tumor. The tumor cells resembled proliferative endometrium and whorling of the neoplastic cells was seen around the arterioles. 2-3 mitosis per 10 HPF were seen. No necrosis was seen. A diagnosis of low grade endometrial stromal sarcoma was made. 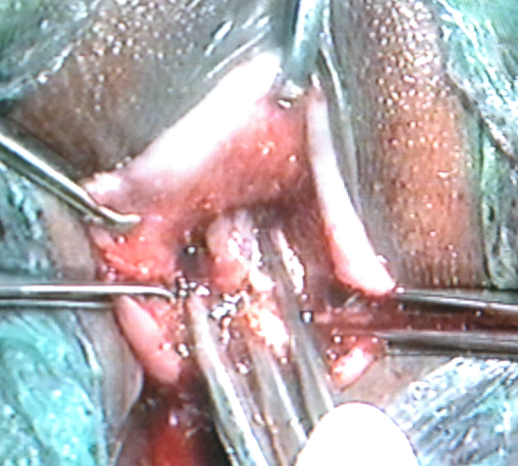 Figure 1. Process of attempt at enucleation of the polyp after posterior cervicotomy. 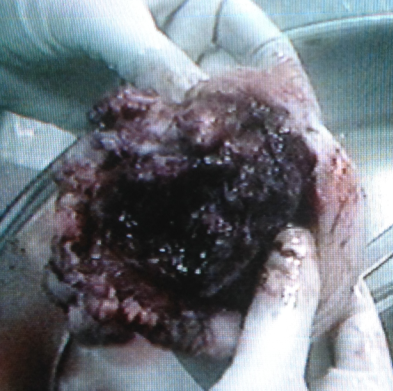 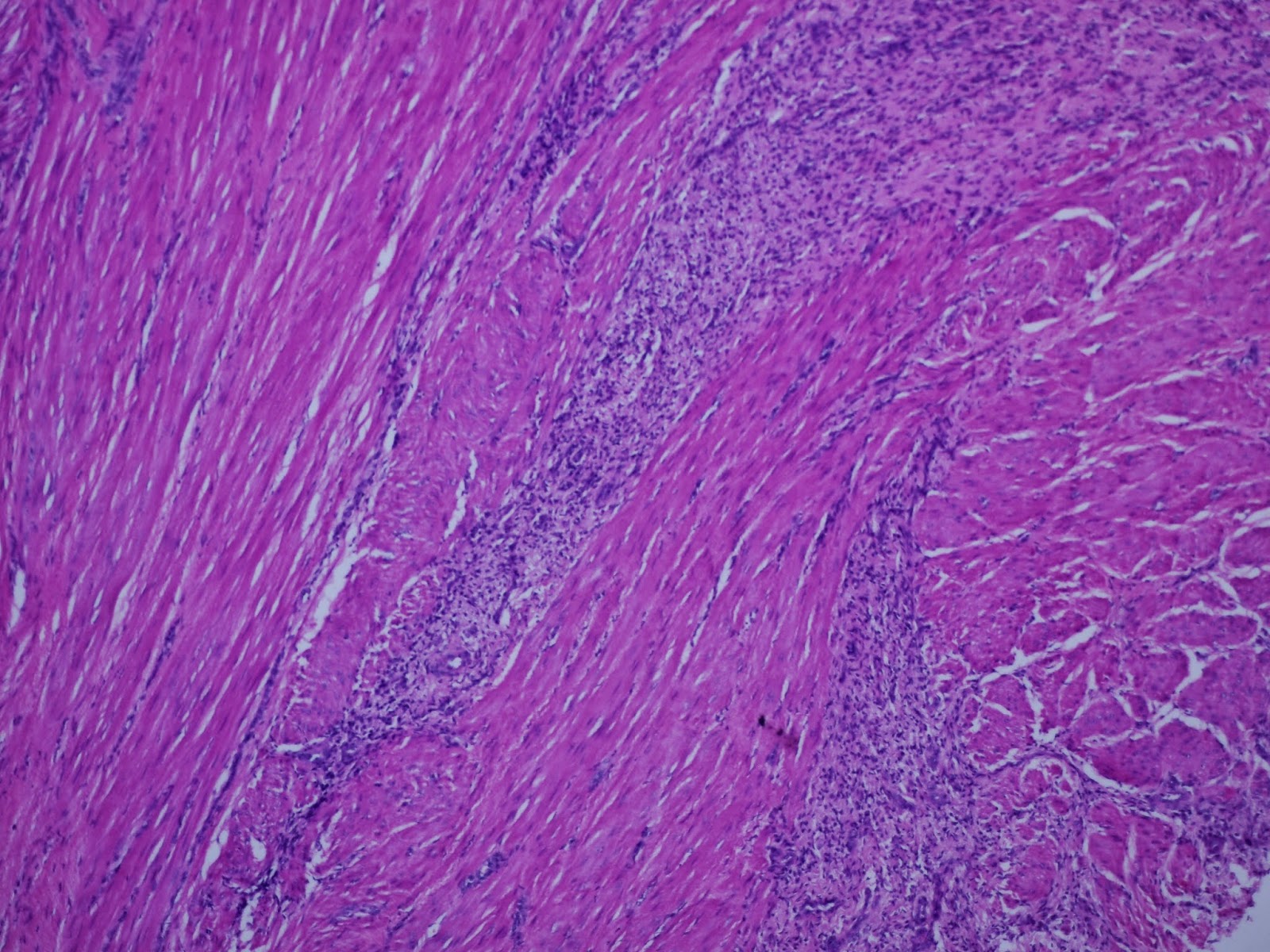 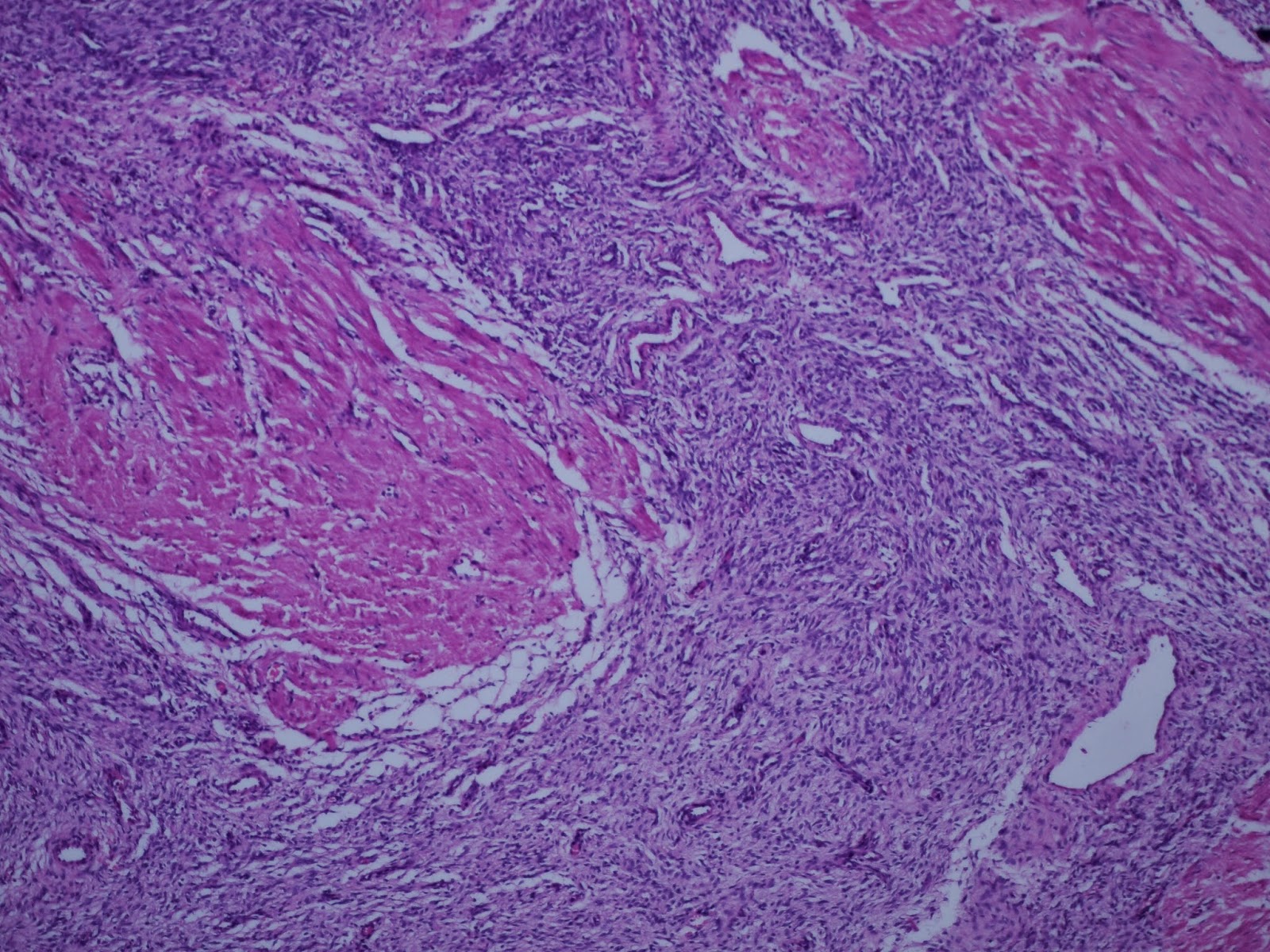 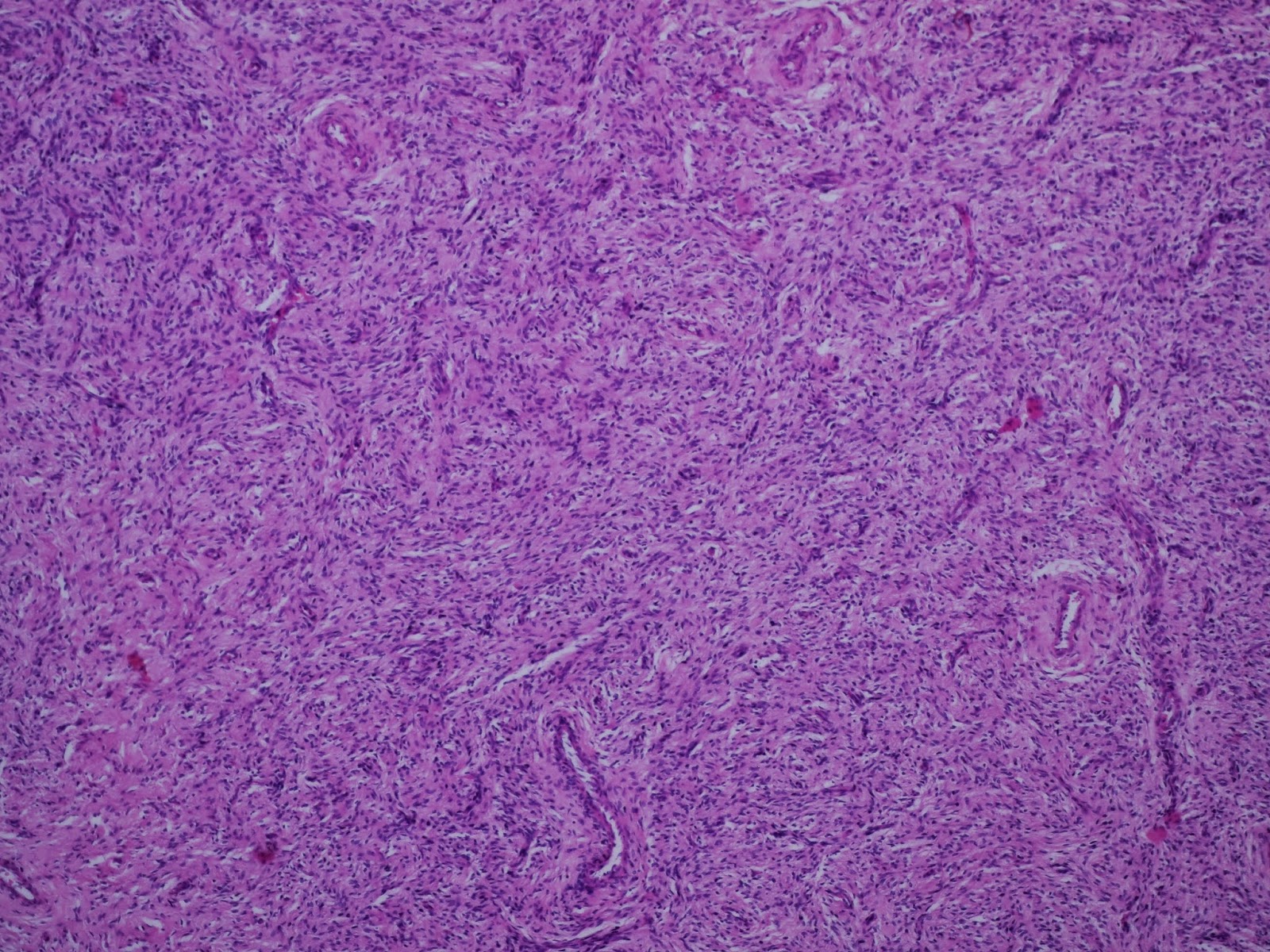 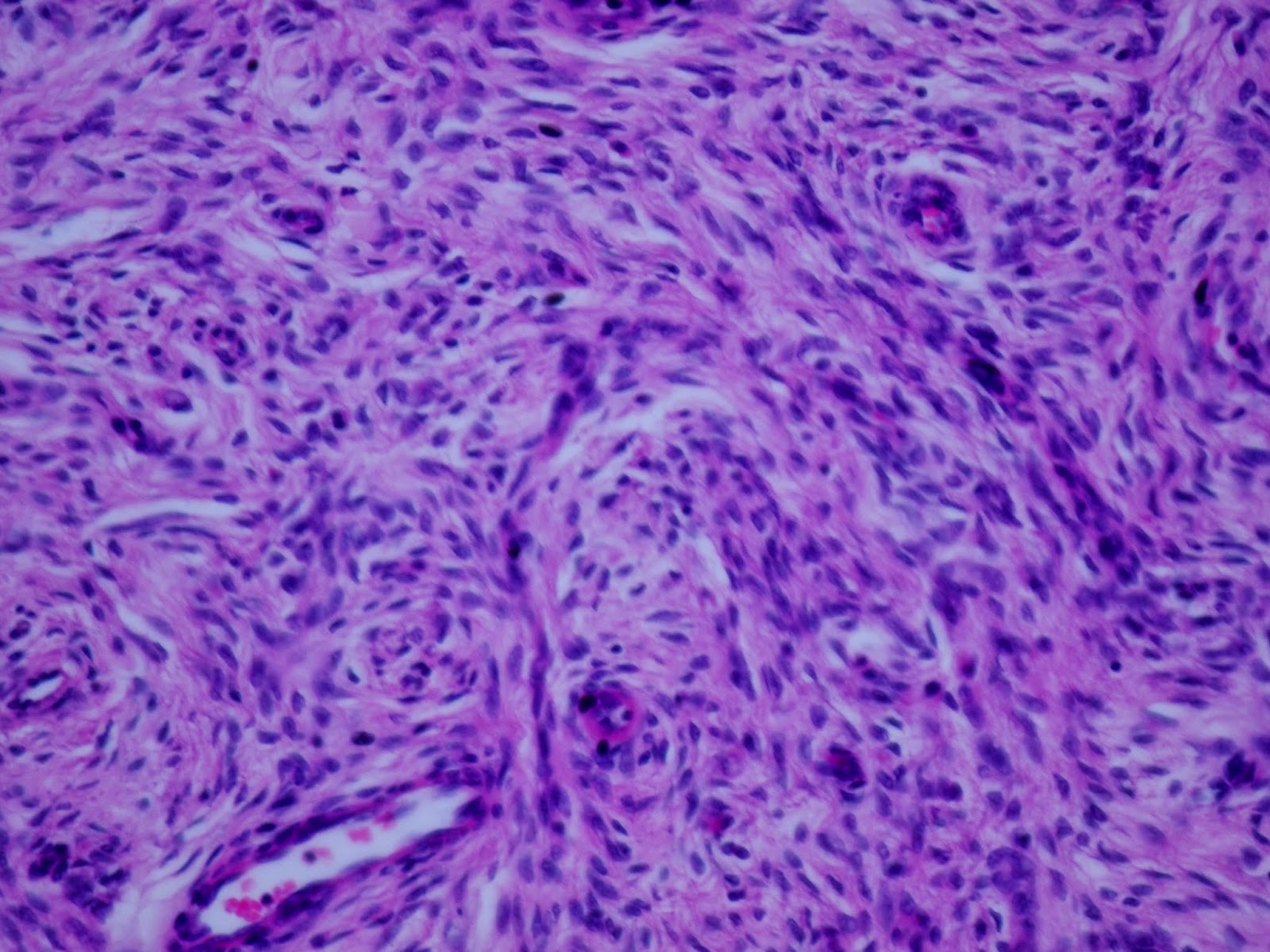 Endometrial stromal sarcoma is a very rare malignant tumor of the uterus. As compared to other malignancies, it tends to occur in younger women, the mean age being 50 years.[1] About 10 to 25% cases are premenopausal. [1] The term endometrial stromal tumor is applied to tumors composed of cells that resemble endometrial stromal cells of the proliferative endometrium. The new WHO classification classifies endometrial stromal tumors into endometrial stromal nodule, low grade endometrial stromal sarcoma and undifferentiated endometrial sarcomas. ESS is said to be predisposed to by conditions like unopposed estrogen action, tamoxifen therapy and polycystic ovarian disease.[2] Though the tumor primarily is intramyometrial, it involves the endometrium in a number of cases. Endometrial curettage in such cases may help make the diagnosis.[3,4] The patients present with abnormal uterine bleeding (90%), uterine enlargement (70%), pelvic pain, and/or dysmenorrhea. About 25% cases are asymptomatic. The diagnosis of uterine leiomyoma is usually made. USG often erroneously shows features of a leiomyoma or adenomyosis, as in our case. Transvaginal color Doppler study shows low impedance flow as compared to other benign conditions of the uterus. On magnetic resonance imaging, ESS shows myometrial invasion and bands of low signal intensity in that area (due to worm-like permeation of tumor cells) and spread by contiguity to fallopian tubes, ligaments, ovaries, and along blood vessels.[5,6] However these tests are not done routinely, because the clinical diagnosis of a leiomyoma or adenomyosis, supported by USG, does not warrant these tests. If the mass appears to be a polyp, there is even less indication for these tests, as in our case. That is unfortunate, because about 50% cases have an extrauterine spread at the time of the diagnosis.[1] Luckily, our patient had to undergo an immediate hysterectomy because of incomplete removal of the mass and suspected uterine injury. We did not perform bilateral salpingooophorectomy at that stage, because we did not know it was a malignant tumor. Total hysterectomy was adequate for her stage of the disease (stage I). Obtaining a frozen section during the operation is not useful in making a diagnosis. If the condition is strongly suspected, a biopsy may be taken before definitive treatment is planned. It is easier when it is a submucosal mass that can be seen through the cervix, as in the case presented. Prolonged follow up is required in all cases, as about 30-50% cases develop recurrences in the pelvis and lower genital tract, and sometimes in lungs years later.[7]