Ovarian cancer can present as a cystic or a solid mass. Usually cystic cancers are partly cystic and partly solid. The fluid contained by them is hemorrhagic, clear or turbid. A unique case of an epithelial cancer with 1900 ml of pus-like fluid is presented.

Ovarian cancer is a disease that can have a varied presentation. A large number of cases are asymptomatic and present quite late in the course of the disease. Examination findings suggestive of a malignant tumor may not be present in all cases. If a tumor is bilateral, partly cystic and partly solid or entirely solid, fixed, and with involvement of other organs or distant metastases is likely to be malignant. A large, cystic, smooth walled tumor in a young girl is unlikely to be malignant. One such case is presented, which was unique in that the tumor contained 1900 ml of pus-like fluid which was not pus.

A 20 year old unmarried woman presented with abdominal enlargement. She had been obese for a long time and had noticed the additional enlargement when someone commented on it. She had regular menstrual cycles with normal flow. She had never had any sexual relations. There were no symptoms of pressure on any abdominal organs. There was no family history of ovarian cancer, linkage with BRCA1 or BRCA2 genotypes, or Lynch syndrome. Her vital parameters were within normal limits. General and systemic examination showed no abnormality. Her weight was 88 kg. Abdominal examination showed a 34 weeks’ size cystic lump in the abdomen, arising from the pelvis. Her hymen was intact, and hence a vaginal examination was not done. A rectal examination showed that the uterus was of normal size, displaced posteriorly by a cystic lump which was continuous with the abdominal mass. Her hemogram, fasting and postprandial blood sugar levels, liver and renal function tests were normal. An abdominopelvic ultrasonography (USG) showed a large (20x10x20 cm), multiloculated, solid-cystic mass filling almost the whole abdomen. The uterus was normal. The right ovary was normal, while the left ovary could not be seen. The bowel, omentum, kidneys and liver were normal. No enlarged lymph nodes were seen. Serum CA125 level was 34.4 u/mL, LDH 165 u/L, βhCG <1.2 mIU/mL. A computed tomography was done, which showed a 21x10x22 cm size well-defined, cystic-solid mass arising from the left ovary. It had septa within it. There was no metastatic disease. A provisional diagnosis of ovarian cancer was made. The patient was keen on fertility preservation after counseling about the same.
An exploratory laparotomy was done. A smooth walled cystic tumor was found filling the abdominal cavity. Peritoneal fluid was collected for cytological examination. The tumor was found to be arising from the left ovary. There was some difficulty in delivering the tumor through the abdominal incision, and the tumor ruptured. It spilled yellow, pus-like, thick fluid which measured 1900 ml. It was not foul smelling. It was sent for microbiologic study. It was thought to be sebaceous material from a benign cystic teratoma. However the possibility of a large ovarian abscess of tuberculous etiology was also kept in mind. The tumor was removed along with the left fallopian tube. There was no apparent spread of the disease to bowel, omentum, liver or the parietal peritoneum. A frozen section of the tumor showed features of a mucinous cystadenoma. But a mixed germ cell tumor or sex cord stromal tumor could not be ruled out. A thorough peritoneal wash was given and an intraperitoneal drain was placed and the abdomen was closed. The patient made an uneventful recovery.
Cytological examination of the peritoneal fluid did not show any malignant cells. The fluid in the tumor did not grow any organisms. Gross examination of the tumor showed multiple cysts within measuring 0.2-6.8 cm in diameter, containing mucus, yellow material at places, and a solid area measuring 5.5 x 4.5 cm. Histopathological examination of the tumor showed a mucinous ovarian neoplasm with a spectrum of benign, borderline and malignant components. The benign areas were composed of cystic spaces lined by a single layer of tall columnar mucinous epithelium with basal nuclei and apical mucin. Borderline areas showed focal papillary excrescences of the cyst wall. The tumor cells showed more proliferative activity and increased glandular complexity. Stratification of the lining and moderate atypia of the coloumnar epithelial cell lining was seen.  Malignant areas showed closely packed glands with back- to - back arrangement and papillae lined by malignant mucin secreting epithelium. Marked cellular atypia, hyperchromasia and mitotic activity were seen and the epithelium resembled intestinal type epithelium. Large areas of necrosis and foci of extensive stromal invasion with desmoplastic reaction around it were seen. The ovarian capsule was intact and the fallopian tube seen at one end was unremarkable. Immunohistochemistry showed the tumor cells to be positive for CK7 AND CK20 positive and CDX2 negative. Thus the neoplsm was of primary ovarian origin, and not secondary to one in the appendix, gall bladder, pancreas or colon. The patient was referred to the cancer institute, where she received 3 cycles of Paclitaxel-Carboplatin chemotherapy. She tolerated the therapy well. Her CA125 levels fell to 19.6 u/mL in one month and remained at similar level during subsequent follow up for two years. She did not develop any recurrence in those two years and is following up regularly. 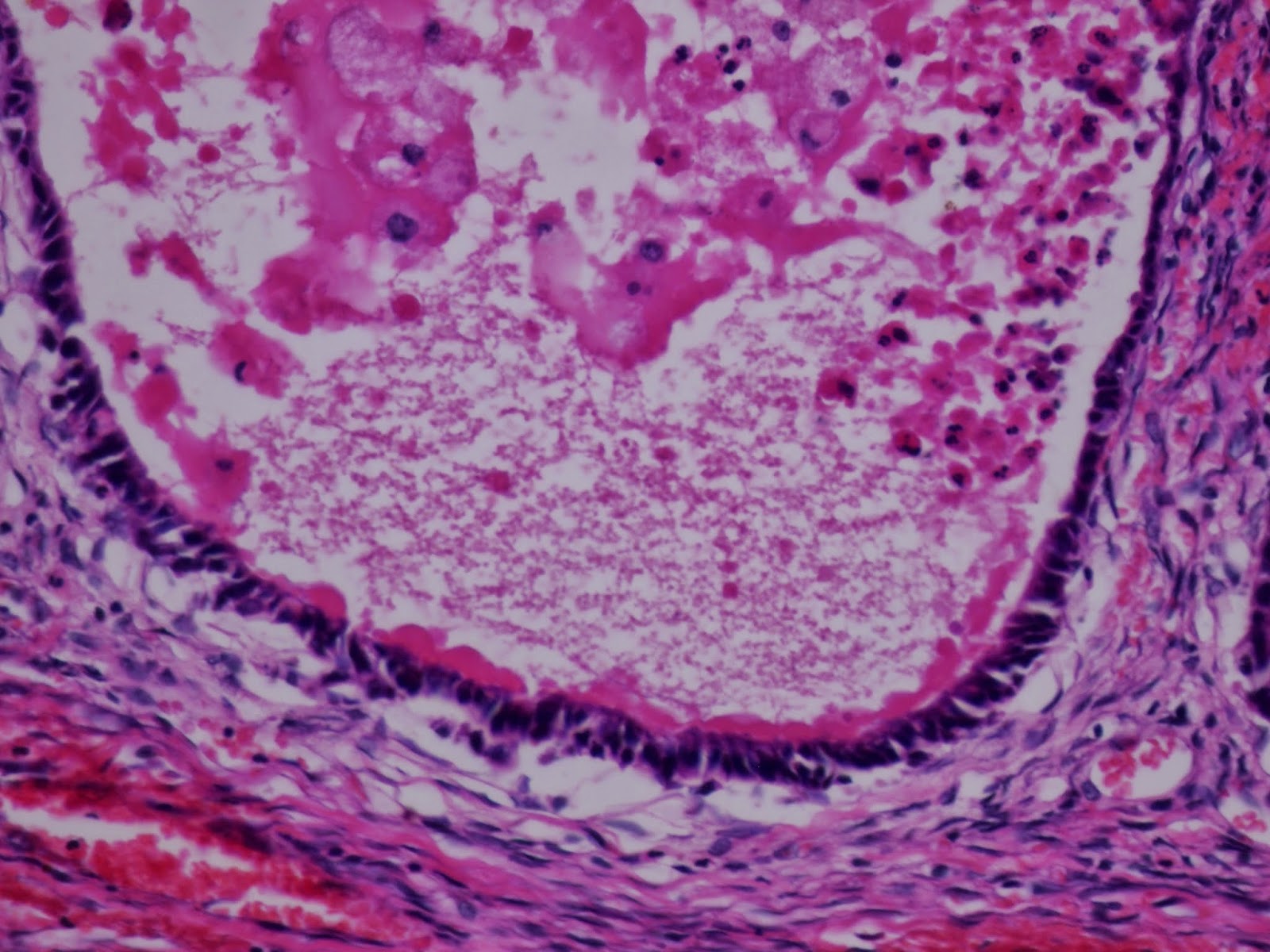 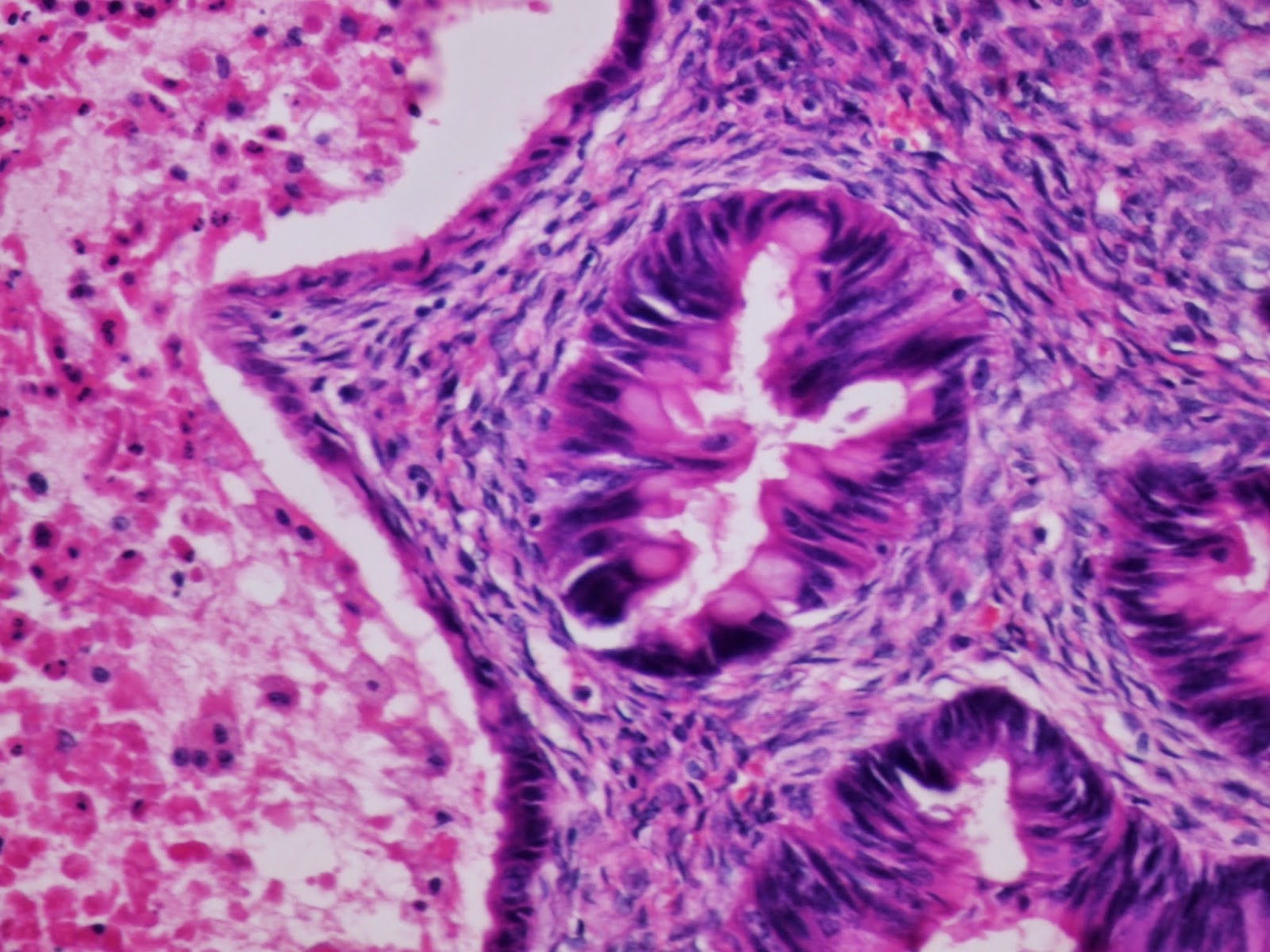 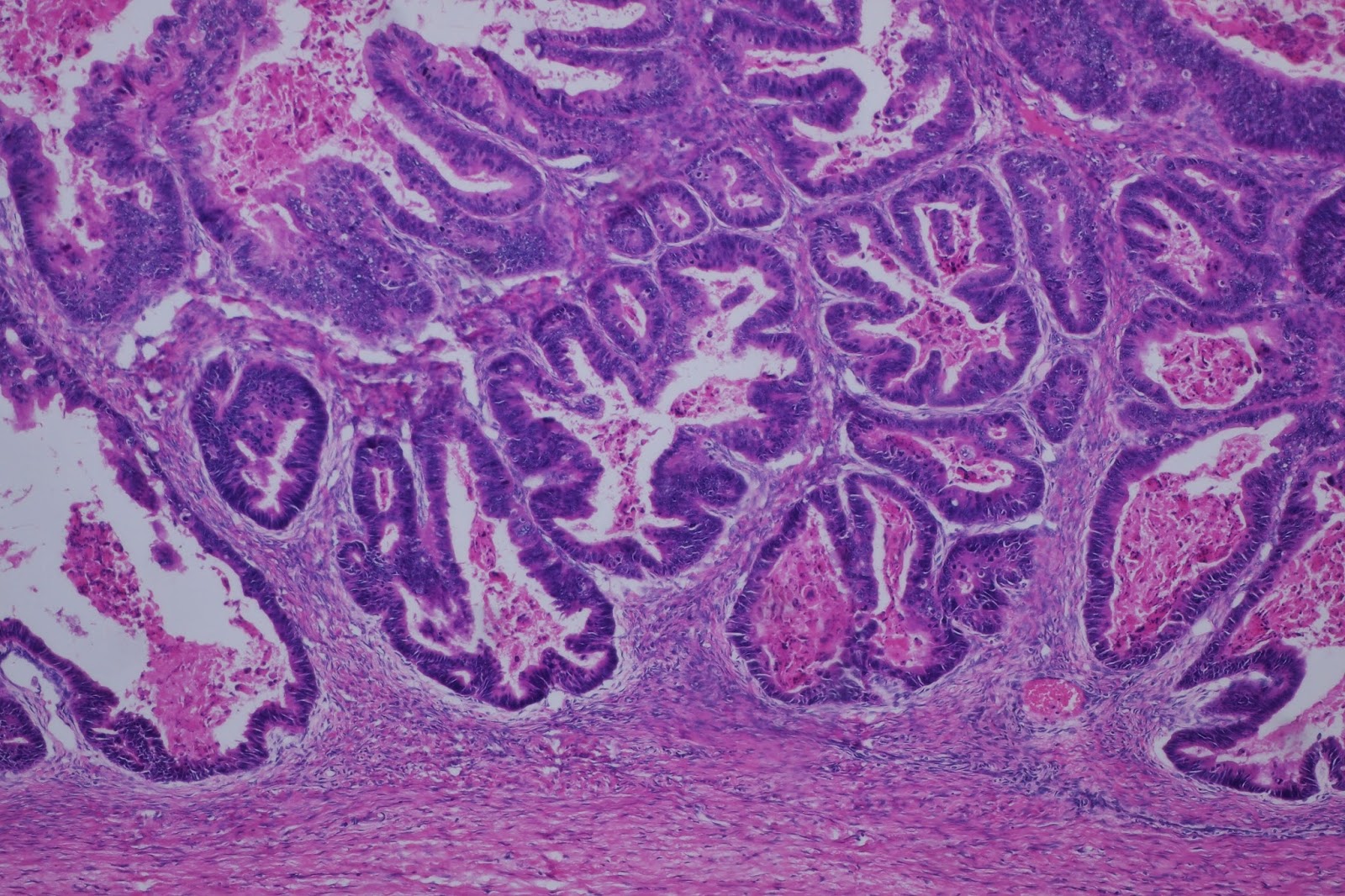 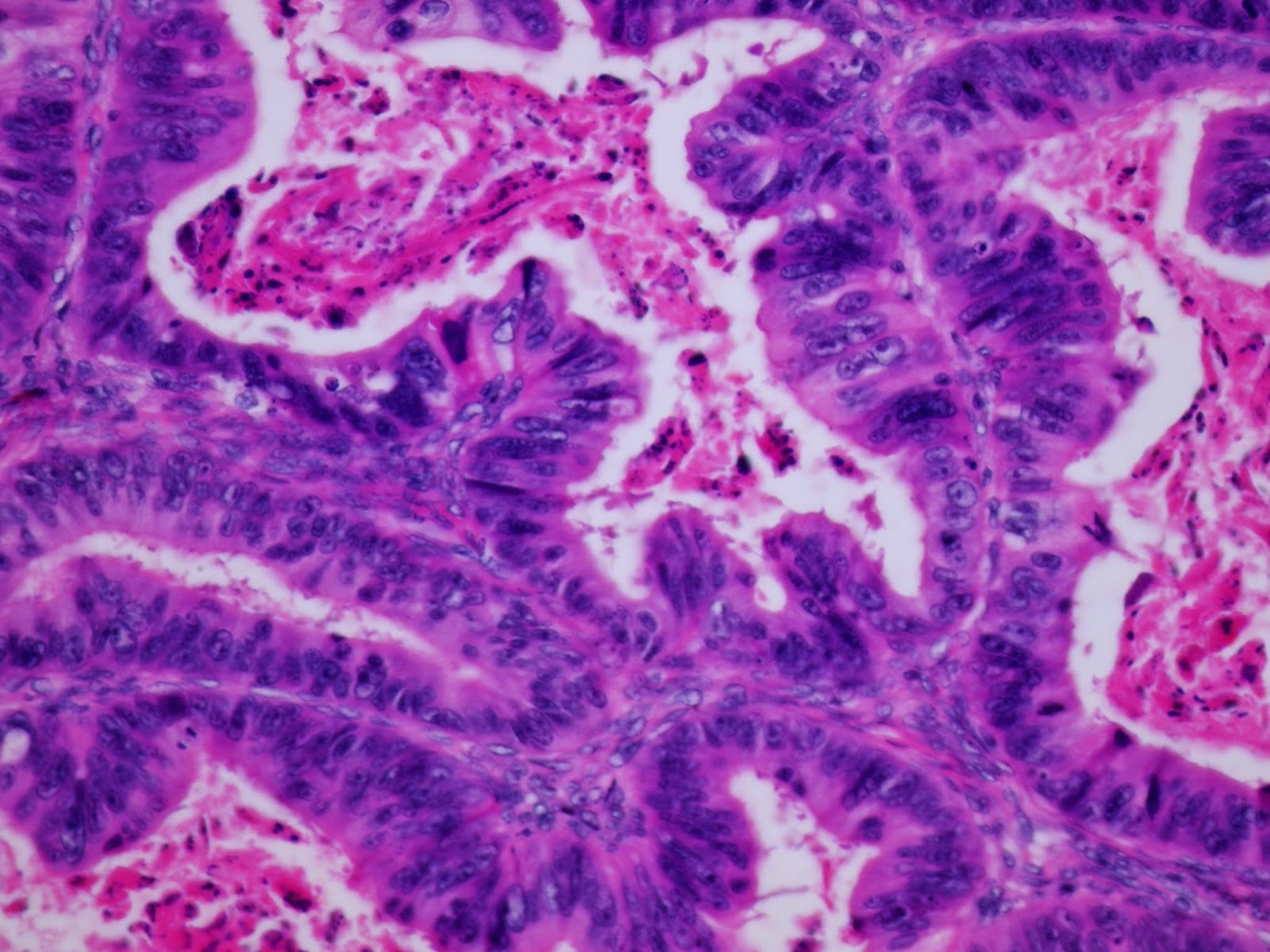 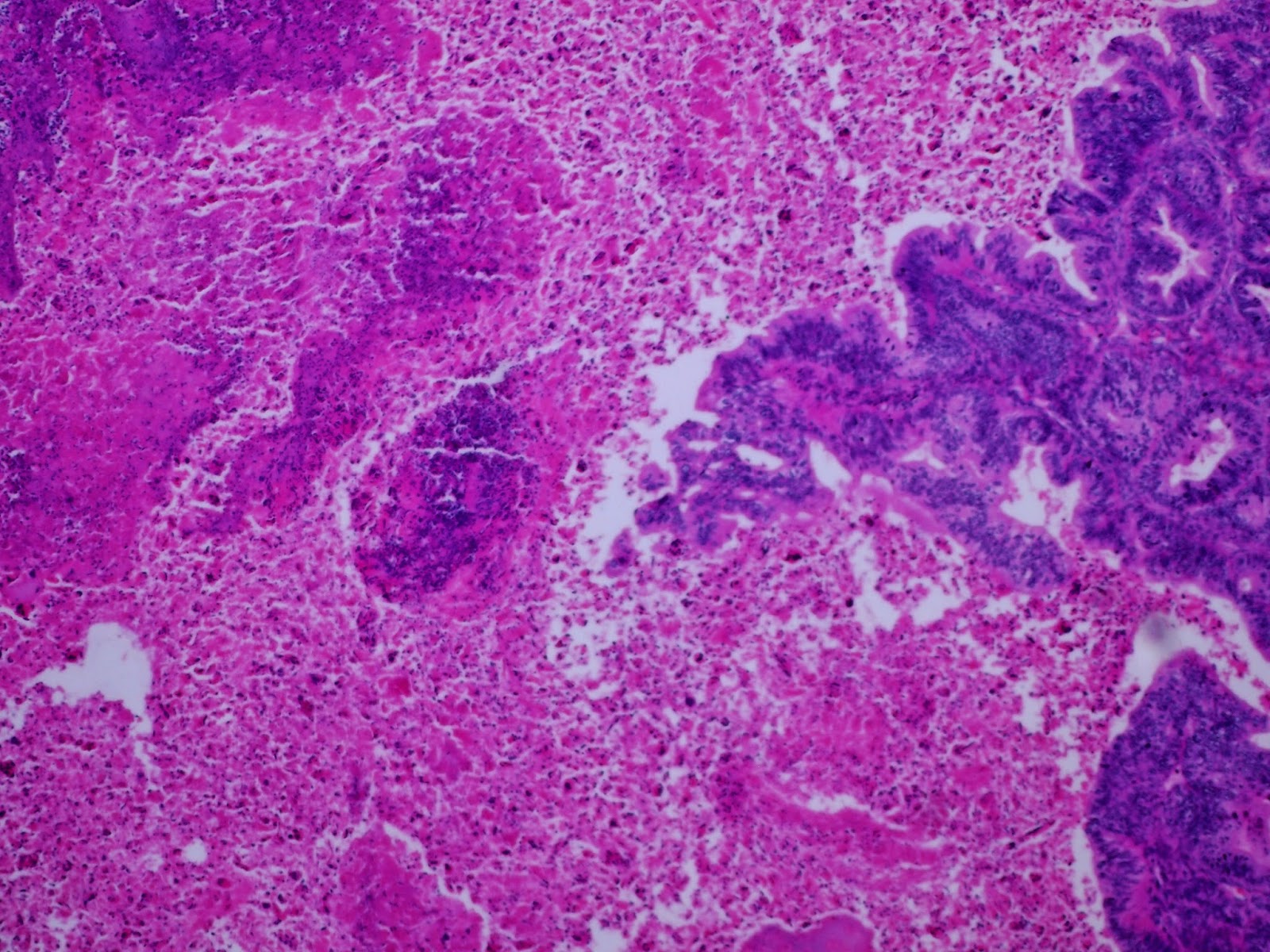 Differentiation of a cystic mass of the ovary with pus-like fluid in it, in a young virginal girl may be difficult. If it is not acutely inflamed clinically, it may be a tuberculous abscess. Other rarer causes include old healed abscess, actinomycosis, and benign cystic teratoma.[1-7] An epithelial ovarian cancer can present as a large cystic-solid mass, but one with pus-like contents has not been described so far. An epithelial ovarian cancer is usually found in women after menopause.[8,9] It is relatively rare in young girls, in whom germ cell tumors are more likely to develop. Such tumors may occur at an early age if the patient has a family history of epithelial cancer, linkage with BRCA1 or BRCA2 gene, or hereditary nonpolyposis colorectal cancer syndrome (Lynch syndrome).[9] The patient presented here had no such association. Mucinous cystadenomas and cystadenocarcinomas tend to be large, weighing as much as 4 kg.[8] The tumor in the case presented weighed 450 g after removal of 1900 ml of fluid from it. There were no features suggestive of a malignancy on USG and CT of abdomen and pelvis. The accidental rupture of the tumor during surgery was unfortunate, as it placed her in stage IC1 instead of IA. By NCCN criteria, she did not require chemotherapy, and unilateral salpingo-oophorectomy was adequate.[10] However she opted for adjuvant chemotherapy in the cancer institute and received the same. Immunohistochemical studies were done in this case in view of presence of intestinal-like epithelium in both benign and malignant portions of the tumor. Cytokeratin (CK) 7 and CK20 are present in colorectal adenocarcinomas. CDX2 is expressed in intestinal epithelium and adenocarcinomas. It is useful when CK7 and CK20 yield equivocal results.[11] In this case, though CK7 and CK20 were positive, CDX2 was negative. Another unusual feature of this tumor was that the fluid inside the tumor was yellow, thick, pus-like in appearance, but not foul smelling. It did not grow any organisms on culture. This sort of fluid in a mucinous cystadenocarcinoma has not been described in the literature. It is likely that it was due to yellowish necrotic debris in the cavity of the cyst.

An ovarian tumor should not be presumed to be of a particular type just by inspection of its contents. Histopathological examination, and immunohistochemical studies as required should be done before making a final diagnosis.