Tuberculosis (TB) is a systemic disease caused by Mycobacterium tuberculosis. There is physiological immunosuppression in pregnancy especially cell mediated immunity. She had repeated episodes of pyuria non responsive to antimicrobial therapy. She was suspected to have chronic urinary tract infection (UTI). Urine PCR suggested Renal TB.

A 22 year old patient G3P1L1MTP1 registered for ANC at 8.2 weeks of gestation. She had complaints of burning micturition, dysuria, and increased frequency of micturition since three months. She was given routine ANC care, advised urine analysis, microscopy and aerobic culture and antibiotic sensitivity. It showed only 2-3 leucocytes/high power field but urine grew E.Coli (>105 colony count) sensitive to Nitrofurantoin. Patient took oral Nitrofurantoin (Modified Release) 100 mg BD for 14 days. She had no symptomatic remission. So aerobic culture and antibiotic sensitivity of urine was repeated. It grew Klebsiella pneumonae sensitive to Cefuroxime. Patient was given oral Cefuroxime bd for 14 days. Patient was then lost to follow up and she presented in Antenatal OPD at 20.2 weeks of gestation, with same complaints, so urology reference was advised for repeated urinary tract infection not responding to organisms specific antimicrobials. Patient was seen in Urology department, where repeat urine analysis and microscopy showed 100-150 pus cells/high power field and Urine culture showed no growth. USG KUB was done which showed renal abscess. The report was as follows: Left kidney had moderate degree of hydronephrosis and proximal 2/3rd ureteric dilatation. An upper pole cortical area with shaggy/irregular walls (abscess) was seen communicating with the dilated pelvicalceal system. Dense echoes (suggestive of infection) were seen within the pelvicalceal system. A non obstructing calculus (3.3 mm) was seen in the lower calyx. Right kidney showed multiple non obstructing calculi in calyces. 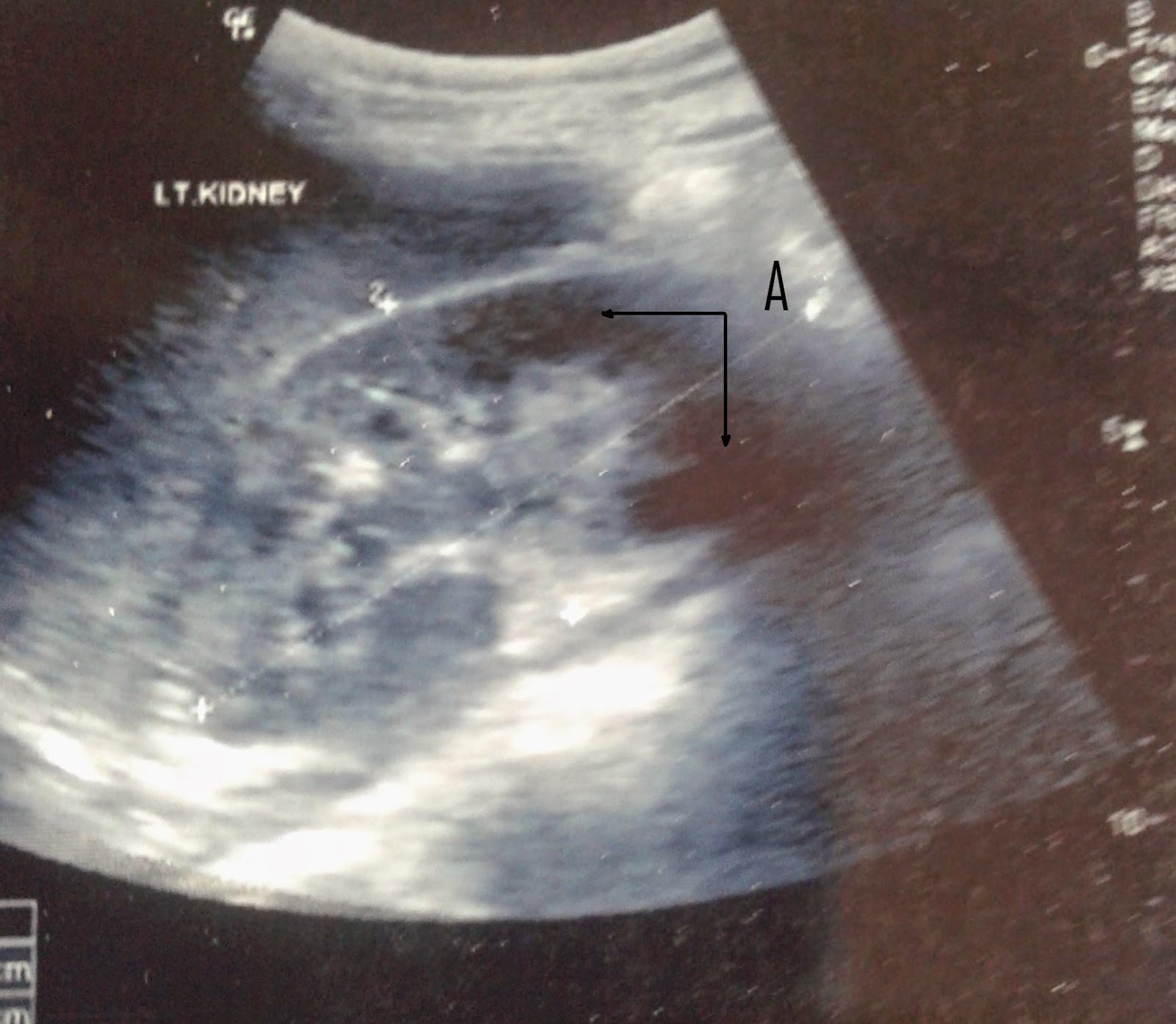 Figure 1. USG of the left kidney. ‘A’ shows the abscess. 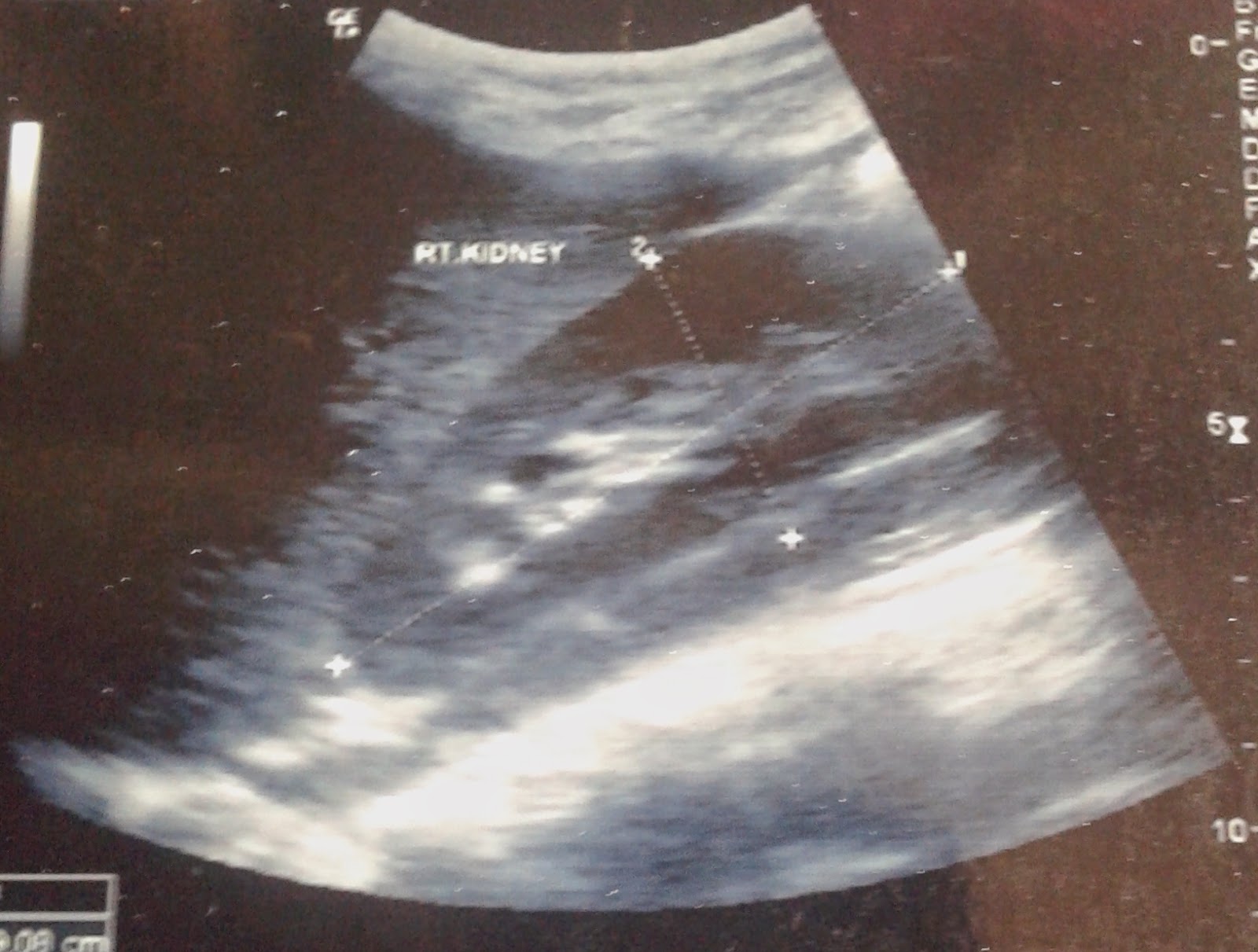 Figure 2. USG of the right kidney.

The patient was admitted under the urologist at 24.5 weeks of gestation. A urinary Ziehl Neelsen staining was done. It was negative, hence urine TB PCR was done. It was positive. So the patient was started with category I anti TB therapy. She had symptomatic relief and was discharged. Patient presented with threatened preterm labor at 33.6 weeks. On examination patient had left renal angle tenderness besides having mild uterine activity. There were no cervical changes. Patient was admitted and conservative management with antenatal steroids and tocolytics was given. AKT (cat I) was continued but patient progressed to active labor and delivered uneventfully after 6 days of admission. Baby weight was 2.225 kg, Apgar scores at 1 and 5 minutes were 9/10. Post delivery patient was relieved from her symptoms of dysuria and burning micturition. There was no tenderness at the left renal angle.

Pregnancy is an immunosuppressive state. Cell mediated immunity suppresses during pregnancy which plays a dominant role in pathogenesis of TB. Genitourinary TB is a reactivation of TB from period of dormancy.[3] Extrapulmonary tuberculosis is a rare form of TB, constitutes only 10%-27% and it is often rare during pregnancy. Genitourinary tuberculosis is a common form of extra pulmonary tuberculosis and it constitutes almost 20-73% of all cases.[4] The diagnosis of this condition may be delayed because of its variable presentation. About 20% patients may remain asymptomatic or may present with atypical symptoms [5]. It is also difficult to diagnose even with the imaging techniques as well as the bacteriological analysis. In many patients urine is generally sterile and contains leukocytes, though in 20% cases it may not have leukocytes [3]. So it is important to consider the diagnosis of genitourinary tuberculosis in a patient presenting with chronic non specific recurrent urinary complaints. The genitourinary tuberculosis may cause frequent hospitalization during pregnancy, increased incidences of maternal disabilities, preterm labor, prematurity, small for gestational age, low birth weight (< 2500 g) and delivery of neonates with low Apgar score.[6] ‘Short course chemotherapy’ is advised for the treatment of genitourinary tuberculosis. According to WHO, the anti tuberculosis drug regimen includes initial two months of intensive phase with four drugs (Isoniazide, Rifampicin, Ethambutol and Pyrazinamide) followed by four months of continuation phase with two drugs (Rifampicin and Isoniazid).[7] The 1st three drugs have no reported teratogenic effect during pregnancy; however, teratogenic data of Pyrazinamide is not adequate [8]. The same regimen was started in our patient. As our patient had a sterile pyuria, presentation of nonspecific recurrent urinary tract infection a diagnosis of urinary tuberculosis was suspected and detected early after evaluation. She had superimposed secondary infection probably due to changes in the urinary tract related to pregnancy.  Early diagnosis and timely treatment of genitourinary TB leads to better health of patient and good fetal outcome and restricts damage to the kidney.

Tuberculosis is a major public health problem. Most important step in management of genitourinary tuberculosis in pregnancy is awareness, early diagnosis and timely beginning of proper treatment.