Ultrasonography helps differentiate between ovarian tumors and fibroids. Large cystic degenerations and leiomyomas located in the adnexa can pose a dilemma to both radiologist and operating surgeon. We present a rare case of a large broad ligament leiomyoma with cystic degeneration masquerading as ovarian malignancy.

A 33 year old nulliparous married lady presented with mass per abdomen and pain in abdomen since last five months. These were insidious in onset with loss of appetite and some episodes of vomiting since last few days. She also complained of easy fatiguability on performing daily chores. She had regular menstrual cycles with normal flow and appeared pale. Per abdomen examination revealed a mass of 22 weeks' gravid uterine size with a non- bosselated surface, soft in consistency, occupying the hypogastric, left iliac and left loin regions with mobility in vertical direction only. The upper and lateral margins were well defined but the lower margin was not felt, appearing to arise from pelvic cavity. Auscultaion revealed no bruit over the mass. Per speculum examination showed pulled up cervix, deviated to right, with a healthy vagina. Bimanual examination confirmed the findings with fullness in all fornices except left fornix; all fornices were non-tender.
Ultrasound revealed a well encapsulated, thick walled, mixed echogenic mass lesion measuring 20 x 16 x10.5 cm noted in the right adnexa with predominant solid component and few cystic necrotic areas. Color Doppler revealed internal vasularity of low impedance flow in the solid component indicating a malignant right ovarian mass; right ovary was not made out separately. Left ovary was normal. Uterus was normal in size, shape and echopattern and visualized separately. CA- 125 levels were in normal range.

Preoperative diagnosis based on history, clinical examination and imaging features was of a malignant ovarian neoplasm. The patient underwent an exploratory laparotomy through a right paramedian infra- umbilical vertical incision. Intraoperatively a normal sized uterus with a broad ligament fibroid 22 x 15 x 10 cm, pedunculated with a stalk arising from the broad ligament was seen on the right side. The fibroid was firm in consistency with cystic pockets, adherent to the omentum and small bowel. After releasing the adhesions carefully, excision of the right broad ligament fibroid was done. Histopathological examination confirmed a pedunculated broad ligament leiomyoma with cystic degeneration. 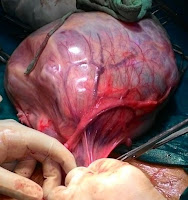 Benign tumors of the broad ligament are usually asymptomatic. The location of the tumors often determines the various symptoms.[2] Ultrasonography is the primary modality used in diagnosis of leiomyoma and most often typical appearances are seen making the diagnosis easy.[3,4] However, atypical appearances that follow degenerative changes can cause confusion in diagnosis.[3] Thus broad ligament fibroid and cystic degeneration of fibroids with internal septations can mimic an ovarian malignancy.[5] Cystic degeneration is considered an extreme sequel of edema in leiomyomas with degenerative changes and its incidence is as high as 4 %.[6] Thus a distinction between benign and malignant adnexal masses done preoperatively helps in optimal case management. Broad ligament fibroids have a potential to grow to large size.[7] A surgical approach is generally preferred for symptomatic large broad ligament fibroids. A multidisciplinary approach to minimize the diagnostic challenges helps optimize the management of such cases and reduces morbidity and mortality.