Fetal cardiac anomalies such as ventricular and atrial septal defects, those involving outflow tracts, chambers, and valves are often encountered in routine screening. However, fetal left ventricular diverticulum rarely gets diagnosed prenatally. We present a case report of a fetal left ventricular diverticulum, diagnosed at 20 weeks of gestation. The diagnosis was confirmed by neonatal echocardiography. A well timed prenatal imaging and diagnosis helps in prognostication and in counseling of the couple.

We report a case of left ventricular diverticulum with fetal bradyarrhythmia and persistent ectopic beats diagnosed antenatally at 20 weeks of gestation. The diagnosis was eventually confirmed on neonatal echocardiography.

A 33 year old primigravida had a routine fetal anomaly scan at 20 weeks gestation which showed an out pouching from the left ventricle of the fetal heart, as seen in Figure 1. This was also visible with color Doppler as seen in Figure 2. 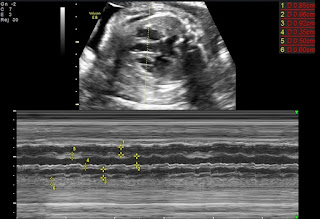 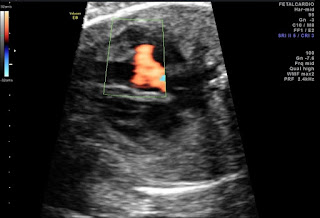 Fetal 2 D echocardiogram showed a large ventricular diverticulum approximately 14 x 7 mm arising from the left wall of the fetal left ventricle. Normal cardiac connection and a left sided aortic arch were noted. The diverticulum was wide mouthed and contractile. There was no evidence of intra-cardiac thrombus. Ventricular function was normal. Also evidence of fetal arrhythmia and persistent ectopic beats was noted. Fetal heart rate was between 80-100 beats per minute. The heart rate showed bradyarrhythmia (bradycardia with irregular rhythm). No pericardial effusion was seen; thorax showed normal appearance. In the absence of hydrops or any other identifiable abnormality in the fetus, the overall prognosis was considered to be good without any intervention. A combined test previously done at 12 weeks confirmed low risk for trisomy 13, 18 and 21. TORCH screening and antibodies SSA-Ro and SSB-La were negative.
Regular ultrasound scans showed normal fetal growth, liquor and Doppler studies for umbilical and middle cerebral artery. The patient underwent a cesarean section for obstetric indication, delivered a male baby weighing 3 kg and had normal Apgar at birth. Mother and baby were discharged after a complete pediatric review. The newborn had regular pediatric echocardiography scan and a detailed CT cardiac angiogram. The diagnosis was left ventricular diverticulum (muscular) with normal outflow tracts. The baby is doing well with conservative management and at present is nine months of age.

Diagnosis of congenital left ventricular diverticulum can be made by fetal ultrasound and can be further confirmed by prenatal echocardiography and MRI. Management depends on the clinical correlation and associated abnormalities, maternal and fetal. If asymptomatic, the diverticula can be managed with a conservative approach. Treatment options for high-risk cases include conservative, medical or surgical approach and management of arrhythmias in symptomatic babies after birth.
Fetal echocardiography has become a very practical and proficient aid. The rates at which cardiac anomalies are detected are on an increase.[1] The overall prevalence of cardiac anomalies at birth is 7.8/1000.[2] A recent addition to the list of antenatally diagnosed cardiac anomalies is ventricular diverticulum; the first case was reported in 1990 [3] and approximately 20 cases have been reported after that.[4] The incidence is 0.5 per 100,000 live births. A ventricular diverticulum originates from either septum, wall, or apex. Such diverticula are only rarely associated with other anomalies.[5]
An important differential diagnosis of ventricular diverticulum is an aneurysm. A diverticulum is a small finger-like, synchronously contracting, narrow projection, with the same thickness and layers as the rest of the myocardium.[6] Fetuses with an isolated diverticulum alone have a good prognosis [7,8]. Cardiomyopathy, Ebstein's anomaly, outflow tract obstruction, and atrioventricular regurgitation may all be identified as a right ventricular diverticulum.[9] Other important differential diagnosis of ventricular aneurysm are post-ischemic aneurysm and intra- thoracic cystic lesions.
The prognosis of ventricular diverticulum depends on the time of detection, the size and the progression, the association and grade of compression of the fetal lungs, involvement of the mitral opening, reversal of atrial shunt, associated cardiac failure, and the presence of connective tissue disorders which may cause myocardial damage.[5,10,11]
This baby was delivered by a cesarean section for purely obstetric indications, and detailed echocardiography after birth confirmed the antenatal diagnosis.