Lower segment cesarean section (LSCS) is the  is the commonest operation in obstetrics today. The percentage of women who had LSCS in India was 2.9%, 7.1% and 10.6% in the years 1992-93, 1998-99 and 2005-06 respectively.[1,2,3] Its technique has evolved over a number of years, but the current technique has been the same, albeit a few minor variations, over a number of decades. The operative steps are well established, the anatomy is easy to understand, and usually there is no error in performance of the operation related to the anatomy of the operative area. A case is presented in which the posterior lip of the cervix was sutured inadvertently between the upper and lower cut edges of the lower uterine segment during performance of an LSCS. This is the first case of this type in the world literature.

A 21 year old primigravida presented in labor at term. She had regular antenatal care. Her past medical, surgical and gynecological history was normal. General and systemic examination revealed no abnormality. Obstetric examination showed a single fetus in vertex presentation. She was in active phase of labor, the cervical dilatation being 4 cm, effacement 60%, station +2, occiput at 2 o’clock position, membranes intact and pelvis adequate. She made good progress and was fully dilated after 4.5 hours. Her second stage of labor was prolonged for 2 hours. A junior consultant attempted obstetric vacuum extraction, which failed. Then a trial of obstetric forceps delivery was done, which also failed. So a decision to perform a cesarean section was taken. The cesarean section was performed by two other junior consultants. A male child weighing 2.8 kg was delivered uneventfully. Its Apgar scores at 1 and 5 minutes were 8 and 10 respectively. The lower segment incision was closed with a continuous interlocking suture of No. 1 polyglactin. The abdomen was closed. At the time of suturing the episiotomy which had been made for the attempted vacuum and forceps delivery, cervix was traced. The anterior lip of the cervix was seen well, but the posterior lip and the sides of the rim of cervix were not seen as they were drawn up (figure 1). There was no communication with the uterine cavity, the roof of the vagina being totally closed by the posterior aspect of the posterior wall of the portio vaginalis. 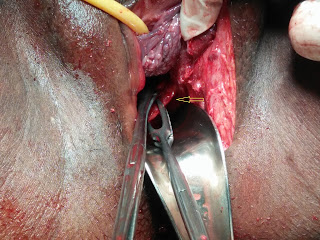 A diagnosis of inadvertent inclusion of the posterior lip of the cervix in the lower segment closure was made. The abdomen was opened again. The lower segment suture line was opened by removing the polyglactin suture. The posterior lip of the cervix was found to be sutured between the upper and lower edges of the lower segment. The cervix was pushed down to its normal position after confirming that it was not traumatized and bleeding. Then the lower segment was sutured again with a continuous suture of No. 1 polyglactin. The occurrence was explained to the patient and her relatives, who accepted it as an error that did not lead to any adverse consequences. The patient made an uneventful recovery. The uterus and cervix were found to be normal at the time of a follow up examination after 15 days. 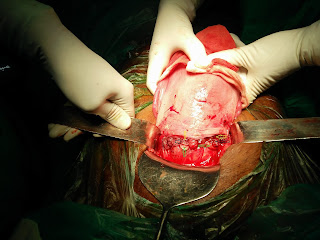 Figure 2. Lower segment suture line. The edge of the cervix is seen (black arrows) protruding between the upper (yellow arrows) and lower edges (green arrows) of the lower segment incision at two sites. 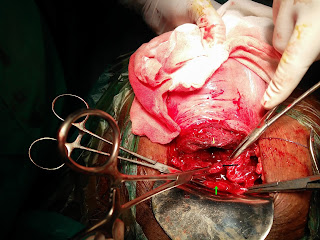 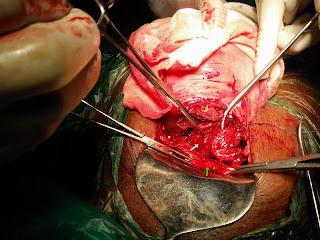 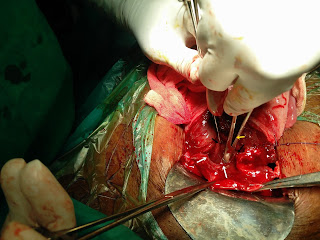 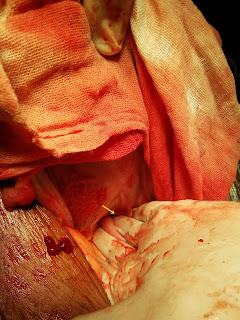 Figure 6. Abdominal appearance of the posterior vagina prior to releasing the posterior cervical lip from the lower segment suture line: the vagina is drawn forward and upward due to traction on the cervix attached to it.

Normally the cervix hangs down after childbirth, following vaginal delivery as well as cesarean section. In the case presented, the posterior lip of the cervix hanging down was somehow drawn up and reached the level of the lower uterine segment incision. It might have occurred while a hand was passed below the presenting part to deliver it. With full cervical dilatation, there is no cervix to get caught between the hand and vertex of the baby. Thus there is reason to beieve that the cervix was not actually fully dilated at the time of the cesarean section. That was probably the reason for  failure of the vacuum and forceps delivery. Then it was inadevrtently sutured to the cut edges of the lower segment incision, believing it to be decidua detached from the myometrium. As a result the uterine cavity got walled off from the vagina. Had the condition not been diagnosed in time, the blood coming from the uterine cavity and lochia would have been retained above the cervix. It could have led to development of a pyometra too.
The reason for publishing this case report is to create awareness of the possibility of such an occurrence, which would lead to serious health consequences for the patient, and medicolegal trouble for the treating obstetrician.