Cesarean Scar Endometriosis- A Postoperative Complication On The Rise

Endometriosis is found predominantly in women of the reproductive age group and is defined as the presence of endometrial glands and stroma outside the uterus. The pelvic organs and the peritoneum are the most common sites of implantation. Scar endometriosis is a rare entity caused by the spread of endometrial tissue to the wound at the time of surgery. Here, we present a case of cesarean scar endometriosis in a 36 year old female who had undergone two cesarean sections, the diagnostic approach used and the management options.

The prevalence of endometriosis is assumed to be around 10 % with higher frequency reported in women with pelvic pain or infertility.[1] Endometriosis outside the pelvic cavity is rare with an incidence of 1 to 2 %. The non-gynecologic sites which may be involved include lungs and pleura, abdominal organs, skin, lymph nodes, the nervous system and brain. Abdominal wall endometriosis, especially following cesarean section is a condition on the rise owing to the increasing numbers of this surgery being performed.[2] Other surgeries or interventions of the abdomen and pelvis can also be causative. The endometrial implants can deposit in the subcutaneous layer, the muscular layer or at the site of the uterine incision. The usual mode of presentation is with complaints of a swelling on or near the scar and pain, which may be cyclical.

A 36 year old lady presented to the gynecology out patient department with complaints of swelling in the lower abdomen, close to the scar of prior cesarean section, since one year. The swelling had gradually increased in size and was associated with pain which increased during her menses.
Her obstetric history revealed that she was a multipara, having undergone two emergency cesarean sections and one minilaparotomy tubal ligation elsewhere, in the past.
On examination, her vital parameters and general physical condition were within normal limits. A per abdominal examination revealed a soft, non tender abdomen with two old, healed scars, one midline, vertical and another pfannenstiel scar. One cm to the left of the midline scar, an ill-defined, firm, non-tender mass was felt of approximate size 2 x 2 cm. Per speculum and per vaginal examinations were normal.
A provisional diagnosis of scar endometriosis was made. Ultrasonography revealed an ill-defined area of hypoechoic collection to the left of the suture line measuring 1.8 x 1 x 2.8 cm, involving the anterior abdominal wall muscle with minimal vascularity within. Ultrasound guided Fine Needle Aspiration Cytology (FNAC) was done which showed features consistent with scar endometriosis. She was advised surgery for excision of the mass but she was reluctant to undergo another procedure and wanted to try the medical line of management. Accordingly, she was started on an oral progestin, Tablet Dienogest, in a dosage of 2 mg, once daily and was followed up for a period of 9 months. The size of the mass had reduced on repeat examination; however, the pain was persistent and hence she decided to opt for surgery.
She was posted for the procedure after taking a written, informed consent. Intra-operative findings showed a 2 x 1 x 1 cm endometriotic mass overlying the rectus sheath and adherent to it. Wide excision of the tissue with surrounding clear margins was done and the specimen was sent for histopathological examination. The abdominal wall gap was reconstructed in layers. The histopathology report confirmed the diagnosis of scar endometriosis. She was followed up for a period of 3 months with no recurrence of symptoms. 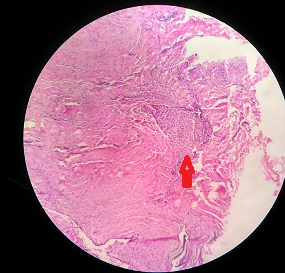 Endometriosis is a chronic, estrogen dependent gynecologic disorder. Although benign in nature, it has many features of malignancy like local invasiveness and the ability to spread to distant organs. A review of literature places the estimated incidence of cesarean scar endometriosis to be around 0.2 to 0.45 %.[3]
The pathogenesis of cesarean scar endometriosis involves iatrogenic implantation of endometrial cells into the site of surgery. These cells then proliferate and form a swelling, under the influence of female hormones and nourished by a rich blood supply. Risk factors known to be associated with the condition include a past history of obstetric surgeries, especially hysterotomy done in the late second to early third trimester of pregnancy.
The common complaints at presentation are swelling in and around the scar site, associated with continuous or cyclical pain, an increase in the swelling during menses and rarely, brownish discharge from the mass. Diagnosis is made based on the history and local examination. Ultrasonography with color Doppler is the only imaging tool needed and is the most cost effective.
Computed tomography or magnetic resonance imaging may be needed only to exclude other diagnoses and to define the extent of the lesion and its involvement with adjacent structures before the surgery. Desmoid tumor, scar granuloma, hematoma, neuroma and metastatic implants are some of the differential diagnoses for scar endometriosis.[5] When these need to be ruled out, FNAC may be a useful tool and it provides a preoperative tissue diagnosis.
The treatment of choice for scar endometriosis is surgery, the procedure being wide en bloc excision with clear margins.[6] Other management options include the use of drugs such as progestogens, combined oral contraceptive pills and synthetic steroids namely, danazol. These medications provide only temporary relief and the condition is known to recur after their discontinuation. Endometriosis can recur in the same site with incomplete excision, hence, wide excision should be ensured. Surgery also prevents conversion to malignancy, which is a rare complication.
For the prevention of scar endometriosis, certain surgical practices have been recommended. These include closure of the visceral and parietal peritoneum, washing the pelvic cavity with saline prior to closure and using separate instruments and suture materials for closure of the abdominal wall.[7] The usefulness of such practices is yet to be proved by studies and further research is needed to establish their effectiveness.

Cesarean scar endometriosis is a rare postoperative complication which should be considered as a differential diagnosis for any swelling arising in and around the scar site. Surgical practices to prevent iatrogenic transplantation of endometriotic tissue to the abdominal wall need to be explored further.