Leiomyomas are the most common uterine tumors, most commonly found during the reproductive years. They are smooth muscle tumors which are benign in nature. They can be either  intrauterine or extrauterine. The classification is mainly determined by the site of its origin and the direction of growth. They are broadly classified into three main types :  interstitial, subserous and submucous. Entities called as extra-uterine leiomyomas exist but they are not as common as uterine leiomyomas. Extra-uterine leiomyomas may develop in the broad ligament or at any other site where smooth muscle is present.[1] Primary broad ligament tumors are rare. They pose specific diagnostic difficulties due to their rarity. Tumors of broad ligament are mostly epithelial in nature and mesenchymal tumors are less common. The commonest mesenchymal tumors found in the broad ligament are leiomyomas.[2] The true incidence of broad ligament leiomyomas is not known. They can cause a variety of symptoms like menstrual irregularities and pressure effects.[1,2] Usually the diagnosis of broad ligament leiomyomas can be made clinically and confirmed by imaging. If not, it is evident during a laparotomy. We present a case in which it was missed clinically, by imaging and was very difficult during a laparotomy.

A 47 year old para 3 living 3 with previous 3 full term normal deliveries came to our outpatient clinic with complaints of abnormal uterine bleeding. She had complaints of menorrhagia since 3 cycles with menses every 15-20 days lasting for 5-6 days with soakage of 5-6 pads per day and passage of clots. She also had complaints of pain in abdomen in right flank and hypogastric region which was dull aching in nature since 15-20 days. She also had frequency of micturition for 1 month. On examination her general condition was fair, vital parameters were within normal limits, and there was no abnormality on systemic examination. On abdominal examination, there was a nontender lump of around 16-18 weeks of gestation arising from the pelvis. On per speculum examination, cervix and vagina were healthy and there was minimal bleeding through os. On bimanual pelvic examination, a single large intramural leiomyoma 5-6 cm in diameter was felt posterolaterally on right side. Ultrasound scan of pelvis was suggestive of an enlarged uterus with multiple intramural uterine leiomyomas. A provisional diagnosis of uterine leiomyomas with abnormal uterine bleeding was made and decision was taken for total abdominal hysterectomy with bilateral salpingectomy. Investigations for fitness for anesthesia were normal. A laparotomy was done. Intraoperatively, there was a large 10x12 cm sized mass on the right side and midline. The uterus and adnexal structures were not found. We were called for assistance at that stage. We found that the mass was covered by peritoneum and had large vessels on the surface. It was not mobile, which suggested that it was extraperitoneal. Its relationship to the uterus was not apparent because the uterus was not seen. Further examination after enlargement of the abdominal incision showed that the uterus was of normal size and shape and was situated within the pelvis, below and to the left of the mass. There was no apparent connection between the uterus and the mass. The fallopian tubes and ovaries were normal. A diagnosis of a right sided true broad ligament leiomyoma was made. 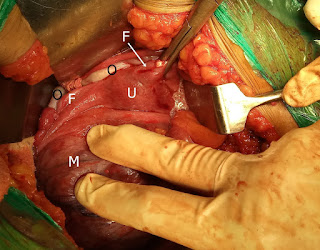 Figure 1. Showing uterus (U) and right broad ligament leiomyoma (M), ovaries (O) and fallopian tubes (F), which have been dragged up by traction with a clamp applied to the left cornual structures.

The right broad ligament was opened by clamping, cutting and ligating the right round ligament. The leiomyoma was dissected and removed after locating the right ureter, which was found to be below and lateral to the leiomyoma. Then total abdominal hysterectomy and bilateral salpingectomy was done. Hemostasis was achieved in the bed of the leiomyoma. A drain was kept in the right broad ligament and the abdomen was closed. The patient made an uneventful recovery. The leiomyoma weighed 1150 g. Histopathological examination confirmed the diagnosis of a uterine leiomyoma. The uterus and fallopian tubes showed normal histology. 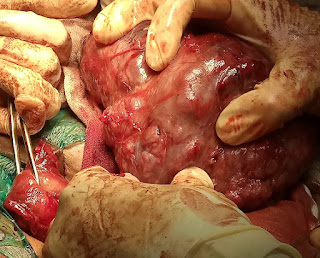 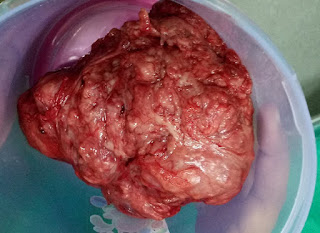 It was a large true broad ligament leiomyoma in our case. Broad ligament leiomyomas have the potential to grow to a large size[8]. We did not do CT or MRI because the diagnosis was apparently clear clinically and was confirmed by USG. Routine use of CT and MRI is not possible in resource poor healthcare facilities. The nature of the tumor could not be determined by the operating surgeon because the uterus and adnexal structures were not seen anywhere. Finally it was found that the leiomyoma was growing from above the level of the uterine vessels and had continued to grow cranially after displacing the normal-sized uterus and its adnexal structures downward and to the left. These structures were hidden below the large mass. Since they serve as a landmark for a gynecologist while dealing with intraperitoneal as well as extraperitoneal pelvi-abdominal masses, their localization is an important step in the management of such masses. Surgery is challenging in case of broad ligament leiomyomas because of their location and size, especially since surrounding organs like ureters, urinary bladder and intestines may be at risk. It is very important to identify the ureteric course during surgery. Also, leiomyoma may be adherent to surrounding structures and therefore lead to greater risk of inadvertent injury.[1]

True broad ligament leiomyoma is a tumor that can be challenging  in both its diagnosis and management. Identification of the uterus and adnexal structures is crucial in determining the source of the tumor during a laparotomy. Though imaging modalities are helpful, the final diagnosis needs to made intraoperatively and confirmed by histopathological examination.