Fetus Papyraceus In A Twin Pregnancy

When the fetus dies in early pregnancy, the amniotic fluid and placental tissue are absorbed and the fetus is compressed between the membranes with the co-living twin. Such a fetus resembles a parchment paper and is known as fetus papyraceus. We present a case that was diagnosed as dichorionic diamniotic twin gestation in early pregnancy which subsequently resulted in the fetal demise of one twin in second trimester leading to fetus papyraceus and successful healthy outcome of second fetus.

A 28 year old lady, registered at our institute, gravida 2, para 0, living 0, spontaneous abortion 1 with 38 weeks of gestation came to emergency with complaints of pain in abdomen. Her ultrasonography (USG) done at 8 weeks gestation was suggestive of dichorionic diamniotic twins and all routine blood investigations were within normal limits. Her anomaly scan done at 18 weeks of gestation was suggestive of intrauterine death of one twin and the second twin was alive with no obvious anomalies. Her blood coagulation profile was normal. She and her husband were counseled about her condition and risks to mother and fetus were explained on continuation of the pregnancy. She was managed conservatively with monitoring of coagulation profile every fortnight and ultrasonography every three weeks. Her  sonography at 27 weeks of gestation was suggestive of a single live intrauterine gestation with mummified second twin. She was advised to keep strict count of daily fetal kick movements and report immediately to the emergency room in case of decreased or absent movements. At 32 weeks of gestation she was given two doses of 12 mg betamethasone intramuscular injection 24 hours apart to achieve fetal lung maturity. Weekly non stress tests and biophysical profile were done thereafter to ensure safety of the live fetus.
On examination in the emergency room, her general condition was fair, pulse rate was 88 beats per min, blood pressure was 122/80 mm of Hg. On per abdomen examination, uterus was full term with breech presentation, fetal heart rate was100 beats per minute with variable decelerations but with a good pick up to the baseline. She had two uterine contractions in ten minutes, each lasting for fifteen seconds. On per vaginum examinations, cervix was 2 cm dilated and poorly effaced with breech presentation.
Emergency lower segment cesarean section was conducted in view of fetal distress. A 2.4 kg baby was delivered by breech extraction method.  Baby cried immediately after birth and was shifted to NICU for observation. Intra-operatively, uterus was arcuate  in appearance (figure 1). There was no evidence of septate uterus or vaginal septum. Placenta weighing 900 gm was delivered completely and with membranes. A 6 cm compressed mummified fetus weighing 150 gm was seen along with the membranes on placental examination (figure 2) Rest of the procedure was uneventful. The neonate and the mother were followed for six weeks. There were no complications and she was advised to follow up for one year with the pediatrician to rule out any developmental delay in the baby. 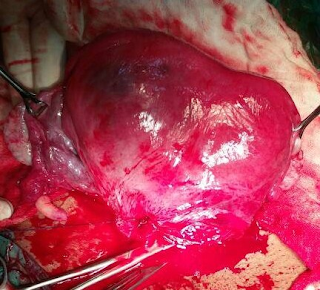 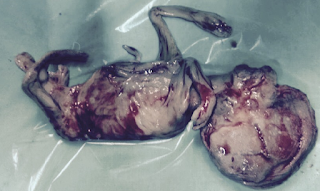 Fetus papyraceus is a very rare complication with the incidence of 1 in 12,000 pregnancies. The actual rate of multiple pregnancies is significantly larger than that observed during labor because of the fact that in the course of pregnancy, intrauterine death of one or more fetuses may occur which may be missed.[4] Depending on the gestational period at which fetal death occurs, there are three forms of this complication; vanishing twin syndrome in the first trimester, fetus papyraceus in the second trimester and the macerated twin in the third trimester. In most cases, death occurs in the second trimester. Between 6-8 weeks, the dead embryo in multiple pregnancies may present in the form of a cyst on the fetal surface of the surviving twin’s placenta. After 8 weeks, the death of one embryo, with resorption of amniotic fluid and mummification of the fetal parts, will cause fetus papyraceus.[5] The degree of compression depends on the time span between the fetal death and delivery; the larger the fetus, the more difficult it is to become a fetus papyraceus.[6] Different causes for the intra uterine death of one fetus include twin-twin transfusion syndrome, membranous or velamentous cord insertion, true cord knot, cord stricture, placental insufficiency, and congenital anomalies.[7]
The risk associated with fetus papyraceus is its effect on mother and surviving co-twin.  Number of the fetuses, gestational age at the time of the death, the reason for the death, the chorionicity and the length of time between demise and delivery of the surviving fetus decides the prognosis of the surviving fetus. In dichorionic twins, the prognosis for the surviving twin is relatively better but in monochorionic twins, the prognosis is poor and is usually associated with neurological damage in the survivor.
Maternal complications associated with fetus papyraceus are preterm labor, infection from a retained fetus, severe puerperal hemorrhage, consumptive coagulopathy, and obstruction by a low-lying mummified twin causing dystocia leading to cesarean delivery.
Close follow up is of utmost importance. Coagulation profile should be checked every 2 weeks and the surviving twin’s well being should be monitored closely with ultrasound, biophysical profile and Doppler. Any anomalies in the surviving twin should be ruled out before making the decision to continue pregnancy. Zygosity and chorionicity evaluation should be performed in the prenatal period. In case of dizygotic twin risk to the surviving twin is not increased and spontaneous onset of labor at term can be awaited under close monitoring of maternal and fetal parameters. In case of monochorionic twin risk to surviving twin is significantly increased through shunt communications which can lead to disseminated intravascular coagulation induced death and organ damage.[8,9]
Neonatal cranial ultrasound is recommended after delivery.[10] Serious compromise in the surviving fetus if anticipated, should be discussed with the parents. Fetal magnetic resonance imaging provides more detailed information about brain lesions in the surviving fetus and its use is recommended.[11] In most of the cases, no complications to the mother or surviving twin are observed and fetus papyraceus is just an incidental finding.  So expectant management with close maternal and fetal surveillance is advised.
Hence timely diagnosis of fetus papyraceus is very important to prevent further complications and have successful surviving fetus outcome. Assuring the parents is very important. Maternal consumptive coagulopathy due to fetal demise of one twin is a rarest reported complication.[12,13]

Though fetus papyraceus is a rare finding, delayed recognition can lead to severe complications. So early diagnosis and documentation is important to prevent the possible complications. Regular antenatal serial ultrasound examinations, serological, hematological, and biochemical testing is required to ensure that the gravida does not develop infection or consumptive coagulopathy. Tests for fetal well-being should also be performed serially.