Concurrent Laparoscopic Myomectomy and Repair of Hydrocele of Canal of Nuck

Hydrocele of in an adult female is a rare entity arising from a persistent fold of peritoneum. Here we describe a case of an hour-glass shaped hydrocele in a 32 year old multiparous lady with a 20-week size fibroid uterus. Following laparoscopic myomectomy the hydrocele was excised and the deep inguinal ring was repaired with purse-string polypropylene sutures.

Hydrocele of is a rare entity. It arises from a persistent fold of peritoneum (), analogous to the processus vaginalis in the male that failed to fuse and involute in early extra – uterine life. Though the condition is most often seen in young girls with an incidence of 1%[1], it has been reported in older women. The hydrocele can be small and asymptomatic, or grow to form a large multiloculated cyst[2,3,4] or could be associated with an indirect inguinal hernia.  Here, we report a case of a large fibroid uterus with an associated hydrocele.

A 32 year old woman, para 2 living 2, presented with complaints of menorrhagia since 6 months and a gradually increasing lump in the lower abdomen and left groin since one year. Her menstrual cycles had increased in duration from 3 to 10-12 days over the last 6 months, with heavy flow and passage of clots. She began to feel a firm lump in her lower abdomen one year ago, which had gradually increased in size and was presently as big as a fist. At about the same time, she felt an additional mass in her left groin, which also increased in size over the period of a year. On examination, her general condition was fair except for mild pallor. On local examination, a 4*4 cm flocculant, nontender, irreducible swelling was noted in the left inguinal region. 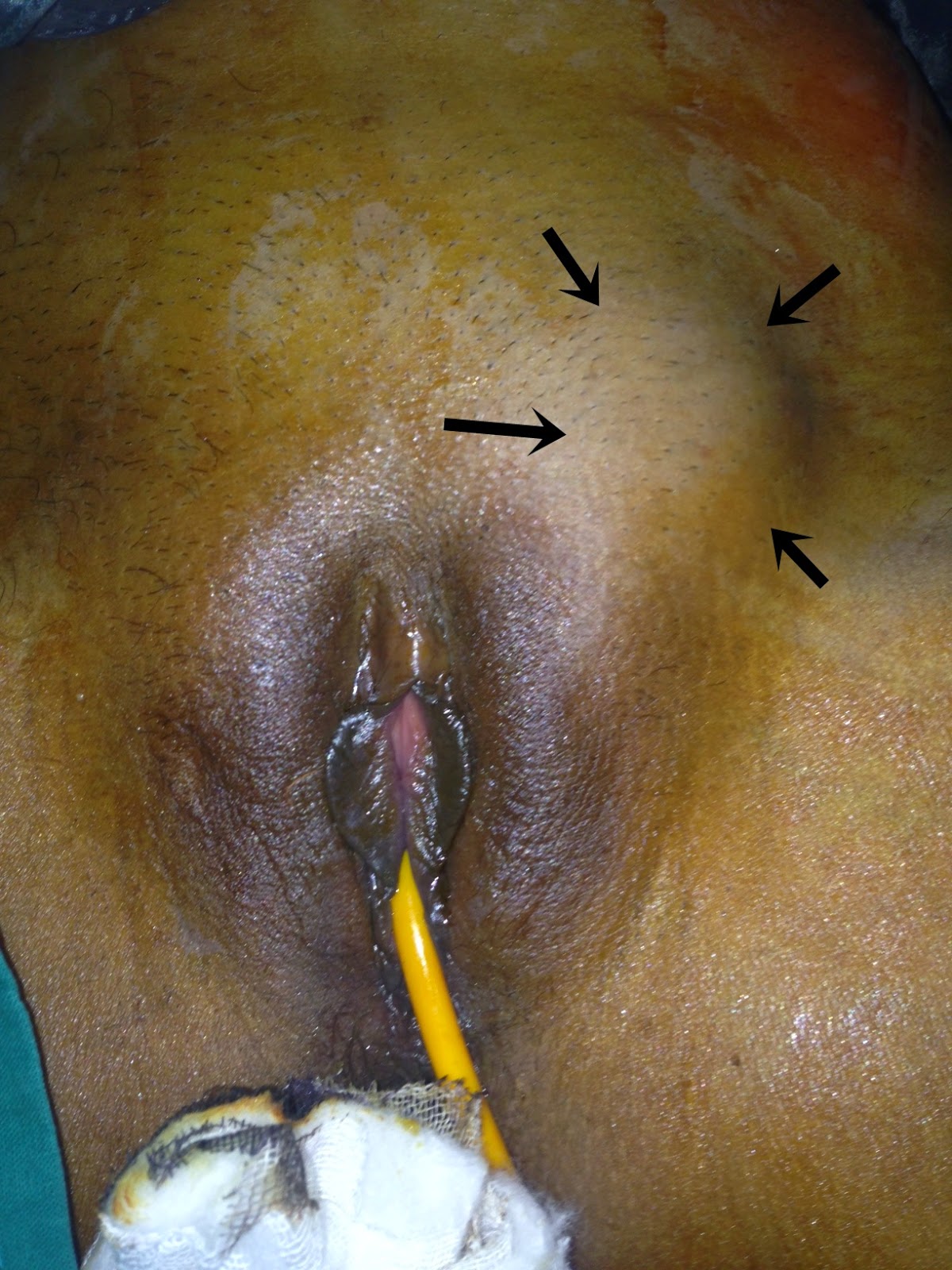 There was no impulse generated over the mass when the patient was asked to cough. The contralateral inguinal region was normal. Per abdomen, a 20-week size firm, immobile mass was palpable arising from the pelvis. On per speculum examination, the cervix and vagina were found to be healthy. The vaginal examination confirmed the presence of a 20-week size uterus with normal adnexae. A provisional diagnosis of fibroid uterus with left sided hydrocele of was made. On ultrasonography a 12x10x10 cm anterior wall fibroid was visualized. However, the inguinal area had not been imaged. After correction of anemia, she underwent a laparoscopic myomectomy with high ligation of the on the left side and tubal ligation. Intraoperatively, the uterus was enlarged with an anterior wall fibroid of about 10x10x10 cm and a 2x3 cm cyst was seen stretching the left deep inguinal ring. This was the intra–abdominal portion of the hydrocele. The trans - illumination test was positive. The fallopian tubes and ovaries on both sides were normal. 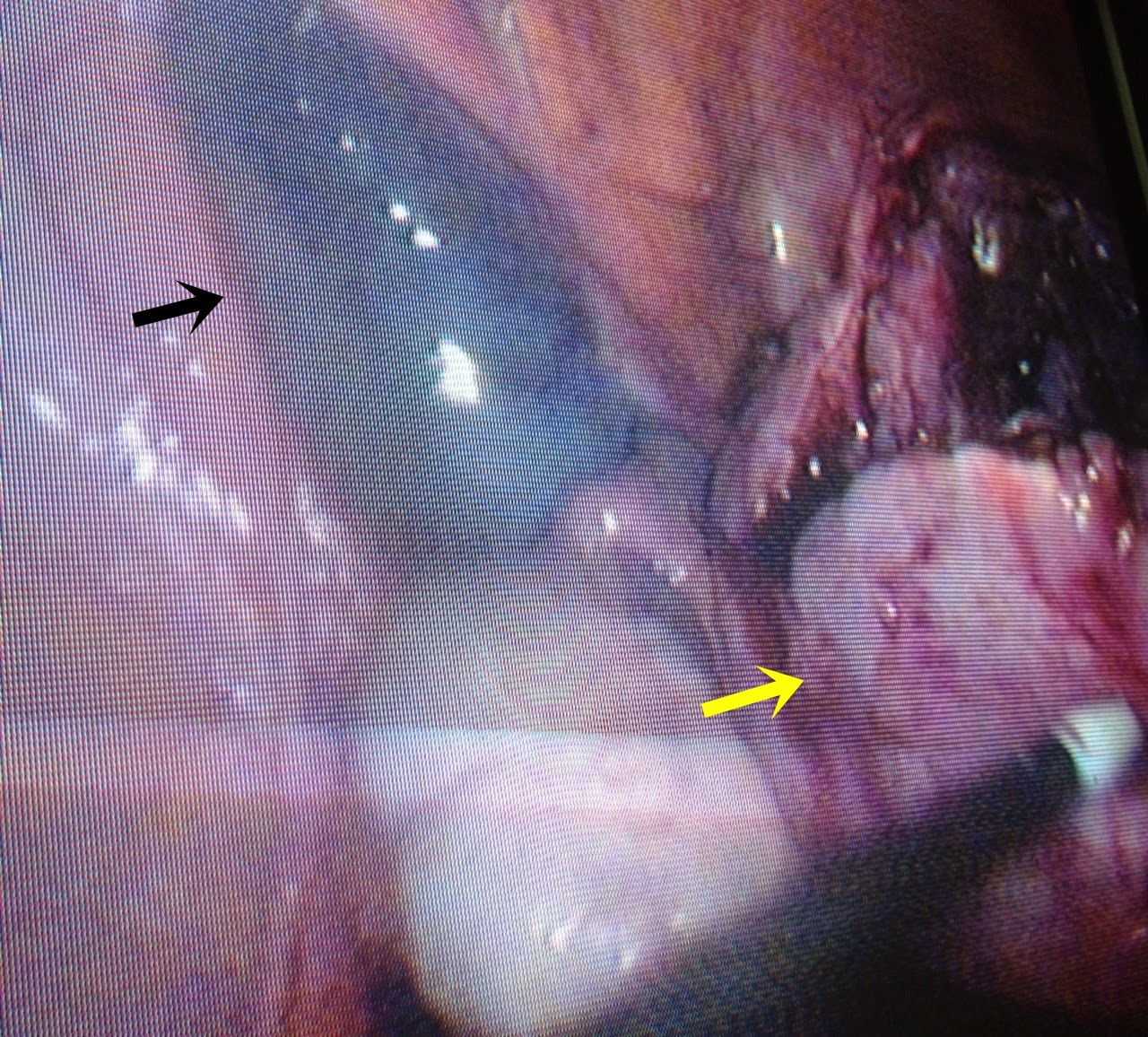 The peritoneum over the cyst was incised and drained to permit visualization of the canal. The cyst wall was dissected off the round ligament and surrounding connective tissue and sent for histopathological examination. 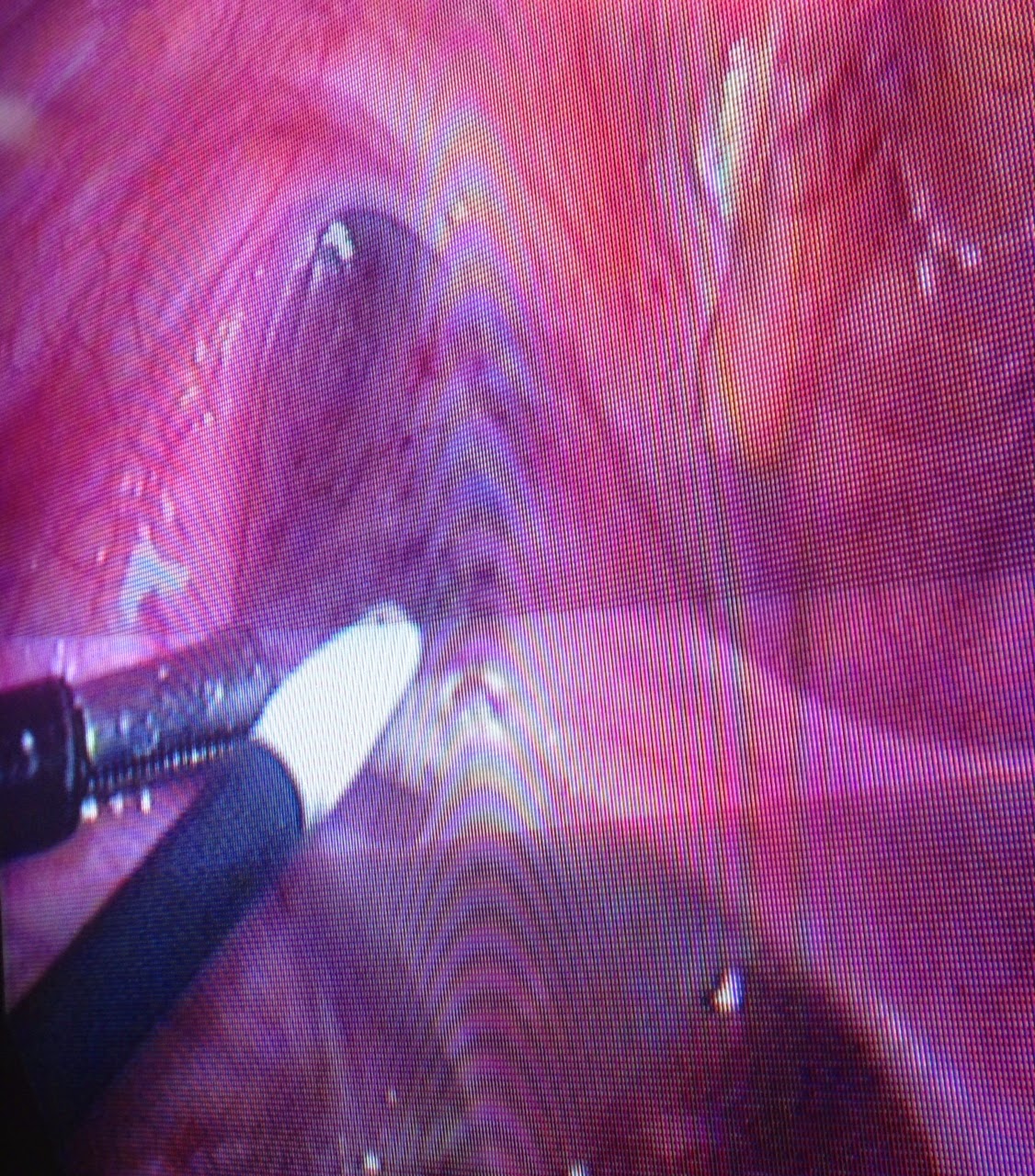 Figure 3 – Opening of the overlying peritoneum

The stretched deep inguinal ring was then repaired using a 1-0 polypropylene suture taken in a purse string fashion, incorporating the round ligament into the stich, and thus obliterating the opening. At this point, the bulge above the labia majora disappeared, even when the pneumoperitoneal pressure was raised to 25 mm of Hg.  A second stitch was taken to ensure adequate closure. The overlying peritoneum was closed. The right deep inguinal ring was found to be normal. 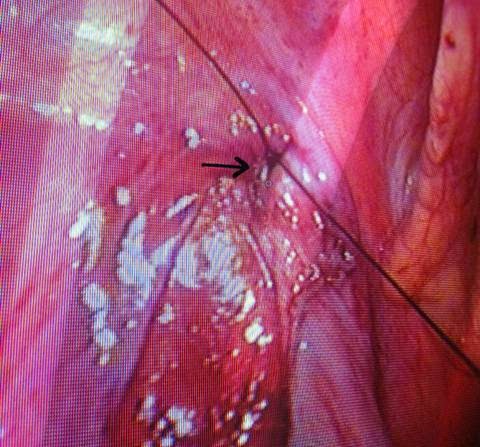 The histolopathological report of the cyst wall showed a mesothelial cell lining along with fibrocollagenous and fibrofatty tissue. She made an uneventful recovery and at her 3-month follow up visit the she was cured.

The is a fold of peritoneum that traverses the inguinal canal and ends at the labium majus which begins to fuse during the 7th month of fetal life and occludes completely to form a fibrous cord by the 1st year of extra-uterine life. If the fold remains patent, it can form a hydrocele (due to accumulation of fluid) or a hernia (due to abnormal protrusion of viscous). There is a 1% incidence of hydrocele of in children, but its incidence in the adult female is unclear because of its rarity.[1] The mesothelial cells that line the canal secrete fluid that is reabsorbed through venous channels or the lymphatics.[2] Inflammation, trauma or blockage of lymphatic channels could lead to an imbalance in the rate of secretion and absorption, resulting in a hydrocele, though in most cases the occurrence is idiopathic.[2] In our case, the probable etiology could be blockage of lymphatic channels due to pressure from the large fibroid as the hydrocele first manifested when the fibroid began to grow. Hydrocele of could be encysted (present along the track of descent), have a persistent communication with the peritoneal cavity or be shaped like an hourglass. In our case it was the third type with both abdominal and inguinal components constricting at the deep inguinal ring.

The differential diagnoses for inguinal masses in women of reproductive age include hernia, lymphadenopathy, haematoma.[3,5,6] lipoma, epidermal inclusion cyst, round ligament cyst, ganglionic cyst, abscess, varicosity of the round ligament[7] and rarely endometriosis.[8] The presence of an irreducible, flocculant, transilluminant mass without a cough impulse or tenderness or signs of inflammation on it points to the diagnosis of a hydrocele. It can be confirmed on ultrasound which often shows a well-defined hypoechoic or anechoic mass in the inguinal region with posterior enhancement.[6,9] The most common complication is an associated hernia. Rare ones include hydrocele/ hernia of the contralateral side and infection.[10]

A report by Counsellor and Black on the histology of the hydrocele cyst wall in 17 cases showed flattened mesothelial cells and fibrous tissue along with occasional smooth muscle cells and blood vessels. [11] Our report was congruent with these findings. The standard recommended treatment for this condition is excision of the hydrocele sac and high ligation of the [12] This can be done through a groin incision or laparoscopically[13] - the latter has the advantages of a shorter operating lime, less post–operative pain and minimal scarring. If there is an associated hernia, a Trans–abdominal pre–peritoneal (TAPP) or Total extra–peritoneal procedure (TEP) may be required.[14] However, for an isolated hydrocele, a TAPP or TEP is not justified due to complications of the mesh like adhesions, peritoneal migration of the mesh, infection, bowel obstruction and scarring.[15]

Women, who in addition to their benign gynaecological condition, have a hydrocele of canal of Nuck, can be adequately treated by laparoscopic excision, high ligation of canal, and repair of the deep inguinal ring in the same sitting.