Intra Uterine Contraceptive Device (IUCD) is most commonly used for long-term contraception. Long-standing in utero Copper T has been found to cause endometrial changes, abnormal uterine bleeding (AUB), complications like perforation, migration into peritoneal cavity and resultant pelvic infections. Our patient is a case of menorrhagia, which when examined, was found to have a nude IUCD, forgotten in utero for 22 years.

Intra Uterine Contraceptive Device is the most common method of reversible contraception worldwide. An estimated 150 million women use IUCDs worldwide. It is the second most common method of contraception after female sterilization. Government of advocated the use of Cu-T-200B for 4 years during the time period of 1975 to 2002. Cu-T-200B should either be replaced or removed not later than 4 years from the date of insertion. Cu-T-380A is being supplied in the Indian states and since 2003-2004 under National Family Welfare Program. Approximately 13.6% of couples use IUCD as the selected method of contraception.[1]

A 48 year old female, gravida 4, para 4, living 4, had come to the gynecology outpatient department (OPD) with a complaint of menorrhagia for the last 6 cycles. On obtaining history, patient gave the history of having an Intra Uterine Contraceptive Device (IUCD) inserted after her last childbirth about 22 years back. She had developed similar complaints of menorrhagia one year after the IUCD insertion. She had gone to a private practitioner who removed the IUCD. However, on redirect questioning it was found that the IUCD was not shown to the patient after its removal. The complaints of the patient had subsided. The patient also gave a history of not using any contraception after the Copper-T was removed. It was after 22 years that patient had developed symptoms of menorrhagia again, six months back, when she had gone to a private practitioner again, who started her on Tab. Norethisterone. She took the medication for about two months and then stopped taking it on her own. She relapsed with menorrhagia, for which she came to our Gynecology OPD. On examination, her abdomen was soft, without any guarding, tenderness or rigidity. On speculum examination bleeding through cervical os was present, black colored threads were seen coming through the cervical os. The cervix and vagina were healthy. On bimanual pelvic examination, a normal sized, anteverted, mobile, nontender uterus was palpated, there was no forniceal masses or tenderness. The vagina and the cervix were then swabbed with Povidone-Iodine and the threads were pulled with a sterile straight hemostat. There was no resistance, and painless extraction of an IUCD was done. There was a forgotten intrauterine IUCD in the patient for 22 years, which looked like as is shown in Figure 1. 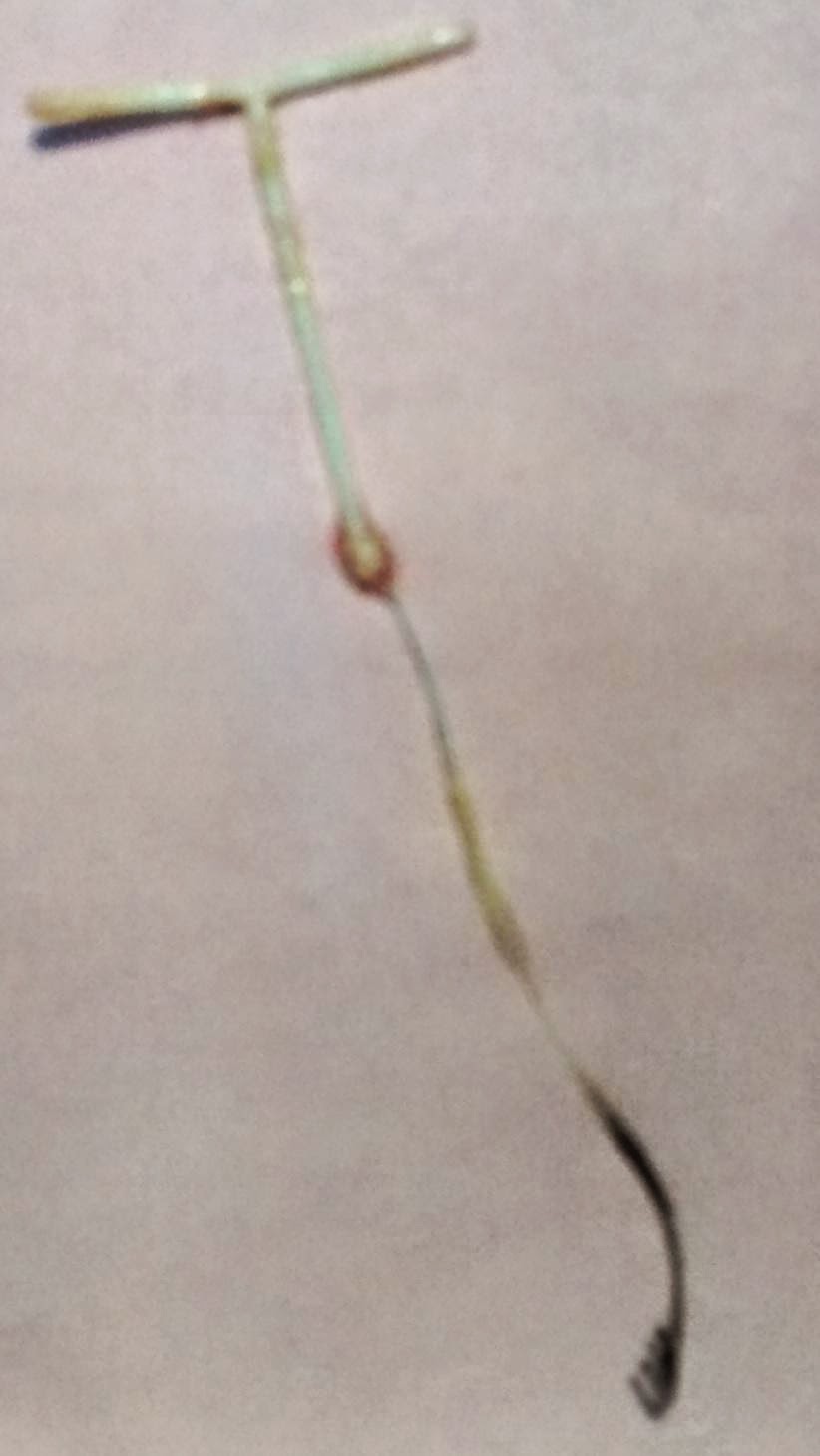 There was no copper left on the polyethylene base of the Copper-T. The patient was shown the retained IUCD. The patient was admitted in the ward for injectable Tranexemic acid therapy. Her Hb was 6.6 g/dl. She improved symptomatically after Inj. Tranexemic acid IV therapy and was discharged on Tab. Ferrous Sulphate 200 mg tds. She did not have any menorrhagia subsequently.

In 1965, Lippes’ loop was introduced as the IUCD, under National Family Welfare Programme. Copper T 200B was introduced in 1975, which was replaced with Copper T 380A in 2002,[2] as Copper T 380A was found more efficacious and safer for longer duration of use as compared to Copper T 200B.[3] The fragmentation of copper was reduced because of addition of Silver in Copper T 380A without affecting its dissolution. Our case is a patient of forgotten IUCD for 22 years, which was Copper T 200B, which was used around 22 years back. Copper T 200B has 120 mg of copper, wound around the vertical limb of the IUD in the form of a 0.25 mm diameter copper wire. The exposed surface area of copper is 200 mm2. The copper from the IUD is released at the rate of 50 mcg per day. The copper in the IUCD should get dissolved in 6.57 years by that calculation.[4] USFDA approved lifespan of Copper-T 200B is 4 years.[5] The patient had not used any contraception even after the completion of days of use of the Copper T 200B. Luckily the patient did not conceive even after expiration of the usage time of Copper T 200B probably because of Copper absorption even after the expiry date, as the amount of copper left could not be estimated, or because of the copper T was acting as an inert IUD, and also contributory factor of declining fertility in an aging woman. IUCD can cause complications like menorrhagia, pelvic pain, pelvic infection, perforation of uterus and hence translocation of IUD. Longstanding IUCDs have been reported to wander in the peritoneal cavity into the Pouch Of Douglas, perforating rectum, appendix and urinary bladder, causing bladder stones.[6] Long-standing IUDs also cause endometrial changes. A study shows the endometrial changes like interstitial hemorrhage in 72% of IUCD users versus 65% in control; glandular hyperplasia in 6% and atrophy in 5% of IUCD users in the study was observed with no incidence of either glandular hyperplasia or atrophy in the controls.[7] Asynchronism between the cyclical phase and histologic phase of endometrium by 4 days in IUCD users was found to be 61%. This asynchronism is found to have antifertility action in IUCD users. Hyperplasia is mostly found in women with IUVDs inserted for more than 5 years.[5]

To ensure the acceptance of IUCDs as method of contraception by many more women, health care providers should take measures in satisfactorily counseling women about the procedure of insertion, to encourage them to ask questions, and answer them. Regular follow-up data sheet should be maintained. The patient should be called for regular follow-up at 1st then 3rd month for the IUCD thread check[1] and yearly thereafter, as the chances of expulsion are maximum during the first year.[8] The patient should be shown the Copper T that was there inside at the time of removal, when it’s removed, which in our case the patient was not shown. Either the older Copper T was not removed or a fresh Copper T was inserted for which a fresh consent was not obtained, either verbal or written. Each time the patient comes up with a fresh complaint or before starting her on a new treatment, she should be examined, unlike our patient who was started on T. Norethisterone without examination. Examination would have diagnosed the cause of her AUB. Such clinical practices should be condemned. Luckily, in this case, the patient had no serious complications like perforation of the uterus or any other vital organs.