Mucinous cystadenoma is the second most common type of benign epithelial ovarian tumor. It is uncommon during pregnancy. In this case I report a 35 year old fifth gravida with 12 weeks of pregnancy presenting with three month amenorrhea and severe pain in abdomen and vomiting since two days. She had a twisted mucinous cystadenoma of right ovary. Right salpingo- oophorectomy was done. She came in follow up with 18 weeks of healthy viable pregnancy that was confirmed by USG. Although surgical intervention is a well-accepted choice in such an acute condition but abdominal surgery in a pregnant state always carries some risk to mother and unborn fetus, so before management appropriate counsellng of patient should be done as well as risks involved with surgery must be taken into consideration.

The incidence of adnexal masses in pregnancy varies from 2% to 10%[1] While incidence of ovarian torsion in pregnancy is 5%.[2] The most common histological diagnosis of surgically treated adnexal masses was reported to be dermoid cyst followed by cystadenoma then functional cysts and endometrioma.[4] Mucinous cystadenoma is a surface epithelial tumor of ovary. Most of them are benign, lobulated with smooth wall. They comprise 28% of adnexal masses found during pregnancy. The most frequent and serious complication of benign ovarian cysts during pregnancy is adnexal torsion. Incidence of adnexal torsion is 5% during pregnancy. Torsion is most common in first trimester and then get less frequent as pregnancy advances. Patients undergoing emergency surgery because of torsion or hemorrhage are at the greatest risk of spontaneous abortion or premature delivery compared to elective surgery, which must be delayed till 2nd trimester. Here, I report a rare occurrence of torsion of large mucinous cystadenoma in first trimester of pregnancy.

A 35 year old women gravida 5 para 2 abortus 2 presented to our gynecology emergency with 3 month amenorrhea and pain in abdomen with vomiting for two days. She had 2 alive children delivered vaginally followed by 2 spontaneous abortions at 2 and 2.5 months of gestational age. In this pregnancy she did not took any antenatal treatment. Her past medical and surgical history was insignificant. On examination she had moderate grade of pallor. She was cold and clammy, her pulse was 120/minute and blood pressure was 90/70 mm Hg. On per abdominal examination there was moderate distension with generalized tenderness and rigidity. On per vaginal examination cervix was soft, os closed, exact size of uterus was not made out because of distension.
Differential diagnosis of ruptured ectopic pregnancy or torsion of ovarian cyst was made. Ultrasonography (USG) showed a single live intrauterine pregnancy, corresponding to 11 weeks and 3 days maturity. A heteroechoic lesion is noted in pelvis arising from adnexa, measuring 13.9 cm x 8.6 cm. Both ovaries were not separately seen. Moderate to gross hemoperitoneum was seen.
Decision of emergency laparotomy was taken with proper counseling of the patient and her relatives. During laparotomy moderate hemoperitoeum was found with a large right unilocular cystic mass of 12x10 cm, twisted around its pedicle. The uterus was 12-14 weeks' size and left tube and ovary were healthy. Right salpingo-ophorectomy was done followed by peritoneal washing. Her post-operative course was uneventful. She was discharged home after obstetric USG confirmed a viable pregnancy of 12 weeks. The histology report showed a benign mucinous cystadenoma of the ovary. Patient came for follow up, currently having 18 weeks of viable pregnancy. 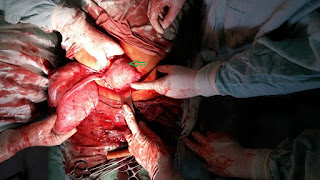 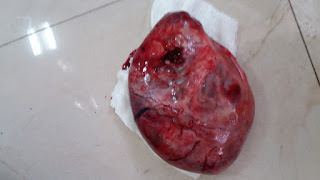 Figure 2 Showing macroscopic appearance of the mass.
Management depend upon the symptoms, gestational age, size and character of the cysts. If the mass is unilateral unilocular and less than 6 cm in diameter, observation is recommended. If it is larger than 6 cm, solid, bilateral, persists into the second trimester or become symptomatic then a surgical intervention is required. If the ovarian cyst is diagnosed in the first trimester it is better to wait until 16 weeks' gestation when the pregnancy is more secure and the cyst may resolve spontaneously by that time. If torsion or rupture of ovarian mass found or any features suggestive of malignancy are present, then emergency surgery is the treatment of choice irrespective of the period of gestation.[9] It is concluded that ovarian cyst in pregnancy must be followed up properly due to possibility of adverse effect of cyst on pregnancy. Though torsion is uncommon in pregnancy it should be kept in mind for making differential diagnosis of acute abdominal pain in pregnancy. Early diagnosis and appropriate intervention are associated with favorable fetomaternal outcome.