Atypical Prsentation Of A Cervical Fibroid In Pregnancy

Cervical fibroids are a rare occurrence. The prevalence of fibroids during pregnancy, irrespective of their site, has been reported to be 1-4% and can present as a diagnostic dilemma. Cervical leiomyomas may be confused with chronic uterine inversion, procidentia or cervical carcinoma. A prolapsed cervical mass simulating a uterine inversion, with a high beta hCG causing a diagnostic dilemma is presented here.

A protruding cervical mass in a woman of reproductive age group encompasses a wide range of diagnostic dilemmas for the gynecologist. The differential diagnosis includes procidentia, uterine inversion, cervical fibroid or cervical malignancy. A good clinical acumen, careful examination and meticulous histopathological analysis is of paramount importance in such cases, and all possible diagnostic and interventional approaches should be explored. A cervical fibroid with pregnancy is an uncommon entity and may pose additional challenges due to atypical presentation.

A 33 year old primipara, married since 15 years, presented to our tertiary care center, with chief complaint of something coming out per vaginum since 2 months. Her previous menstrual cycles were irregular and she reported menstrual-like bleeding, starting 15 days prior and she was bleeding continuously since then. On examination, her pulse rate 110 per minute, blood pressure 90/60 mm Hg, with severe pallor, but no icterus or edema.  Cardiovascular and respiratory system examination were within normal limits. There was no abdominal guarding, rigidity or tenderness. Local examination showed a large fleshy prolapsed mass measuring approximately 8x8 cm, soft in consistency, with irregular contour (figure 1). On per vaginal examination the uterus was 14 weeks' size with cervical rim felt beyond the mass with marked tenderness on deep palpation.
Laboratory investigations revealed severe anemia. Blood sugars, liver and renal function tests, coagulation profile, thyroid function test were within normal limits. Urine pregnancy test was equivocal. Therefore we decided to send beta-HCG and surprisingly, beta-HCG was 2,23,700 IU/ml. Patient was admitted and transfused 2 units of packed red cells and IV antibiotics were given. A computerized tomography abdomen with pelvis revealed 8x6x13 cm cervical fibroid with endometrial thickness of 2.4 cm. Repeat beta-HCG after 48 hours was 307000 IU/ml. A decision for examination under anesthesia with dilatation and curettage was taken with the following differential diagnosis in mind: cervical fibroid with incomplete abortion, chronic uterine inversion, gestational trophoblastic neoplasia with cervical growth.
On examination under anesthesia, a large polypoidal, 8x8 cm pedunculated fleshy mass arising from 9’o clock position of the cervix was noted, it could be extruded out from the vagina, and uterine sound could be easily negotiated (figure 2). A cervical polypectomy with dilatation and curettage was done and specimens sent for histopathology examination. Histopathology of mass revealed few irregular glands with complex architecture with minimal nuclear atypia. No evidence of mitosis or necrosis. Surprisingly, the features were described to be suggestive of “adenoma malignum” and immunohistochemistry was advised. The endometrial curettage specimen revealed products of conception. Repeat beta-HCG done after one week was 123000. Immunohistochemistry (sent to a referral oncological laboratory) report of the cervical mass showed mucinous glandular epithelium negative for CEA, CDX2 and CK20, but positive for CK7, while Ki-67 index was upto 1%.There was no cytologic atypia. The histopathological diagnosis was revised to one of adenomyoma of cervix, without any features suggestive of malignancy.  pproximately two weeks later, patient presented with profuse bleeding per vaginum, for which dilatation and curettage was performed and histopathology revealed products of conception. 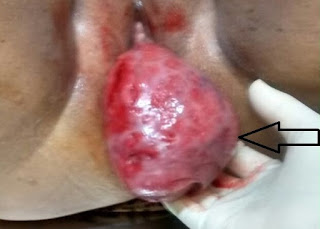 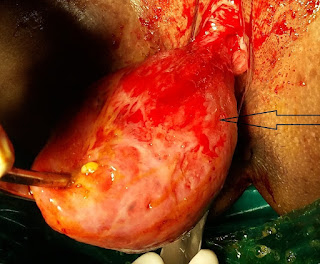 Figure 2. Origin of the mass from the cervix (arrow). 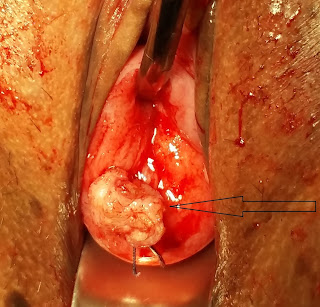 Figure 3. Pedicle of the mass on the cervix (arrow) after the procedure.

Leiomyomas are the most common pelvic tumors among women of reproductive age group. Cervical leiomyomas contribute to 1-2% of leiomyomas.[1] Pregnancy associated with cervical fibroid is a rare occurrence. It may present with heavy bleeding, pain, anemia and generalized discomfort.  Cervical fibroids in pregnancy cause obstructed labor unless very well taken up into the lower segment. Infection in a fibroid can occur postpartum more commonly following an abortion.
Cervical fibroids in pregnancy pose a distinctive challenge. Management options depend on the patient's general condition and gestational age at the time of presentation and future fertility desire.[2]
Minimal deviation adenocarcinoma (MDA), also known as adenoma malignum of the uterine cervix, is a rare entity, which may be associated with Peutz-Jeghers syndrome. MDA appears as multilocular lesions with solid components that extend from the endocervical glands to the deep cervical stroma. Accurate diagnosis of MDA is important because of early dissemination into peritoneal cavity, and necessitates aggressive management.[3,4]
MDA was an opinion of the pathologist of our center, which was ultimately ruled out upon immuno-histochemistry. It is important to note that this rare entity, has a very high inter-observer variability in its reporting 5, mainly because this entity can closely mimic other pathologies.[4,6]

Immunohistochemistry refers to the process of detecting antigens (e.g., proteins) in cells of a tissue section by exploiting the principle of antibodies binding specifically to antigens in biological tissues. The pseudocapsule of the fibroid expresses proteins like collagen and laminin IV, used as specific markers. The fibroid development is postulated to progress due to angiogenic factors and markers specific to those are proposed for management options. Thus, although immunohistochemistry is in its primitive stages as regards management of fibroids, it shows a promising future.[7,8]
Despite the varied modes of presentation of fibroids, very rarely do they need immune-histochemistry for their final confirmation. In this particular case, the diagnosis could be ascertained only after this special investigation, and hence this case is presented here.