Gestational trophoblastic neoplasms (GTN) are rare tumors that contribute to less than 1% of all gynecological malignancies. Invasive mole is a type of GTN. This is a case of an invasive mole of the uterus, which developed following a molar pregnancy evacuation. It was diagnosed by persistent raised level of β-HCG, transvaginal ultrasonography and color Doppler study. The tumor was treated successfully with chemotherapy.

A 26 years old patient married since two years, gravida 1 abortion 1, came to our tertiary care hospital outpatient department with complaints of three month of amenorrhea, pain in abdomen and bleeding per vagina since five days. The patient was apparently alright six months back when she missed her period for which urine pregnancy test was done and was tested positive. Ultrasonography of pelvis was suggestive of hydatidiform mole. She underwent suction evacuation in Rajasthan for the same. β-HCG level was not done.
Two month later a repeat check curettage was done in a private hospital in view of  persistent bleeding with β-HCG level 5,000miu/ml and ultrasonography of pelvis suggestive of persistent hydatidiform mole.
The patient followed up with serial serum β-HCG level and ultrasonography. β-HCG showed gradual rise in level up to 14,000 miu/ml. Ultrasonography was suggestive of development of left adnexal mass with multiple cysts with increased vascularity. Ultrasonography showed gradual increase in size of adnexal mass up to 5 x 3 x 2 cm inseparable from uterus and left ovary.
The patient came to our tertiary care hospital OPD with above said reports. On her examination vital parameters were normal, per abdomen - soft, per speculum - minimal bleeding present, cervix and vagina healthy, per vaginum – uterus of normal size, anteverted, cystic swelling of 4 × 4 cm in left adnexa was felt and 2 × 3 cm small cystic mass was felt in right adnexa. Both the masses were non-tender and mobile. A gestational trophoblastic neoplasm was suspected. Tumor marker, ultrasonography with colour Doppler and MRI pelvis were done. All were suggestive of invasive mole with left adnexal involvement without distant metastasis. WHO prognostic score was suggestive of low risk. An opinion of a medical oncologist was taken, based on which she was started on chemotherapy with two cycles of injection methotrexate 1 mg/kg on alternate day with injection leucoverin 0.1 mg/Kg. The treatment was started with monitoring of total blood cell count, liver function tests and renal function tests. Serial monitoring of serum β-HCG level was done.  Post second cycle β-HCG fell to undetectable level after 2 month. Regular follow up with monitoring of β-HCG level was done which showed no further increase. 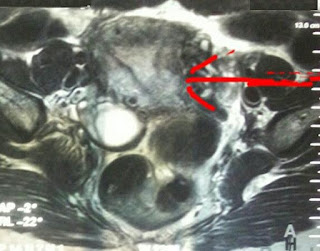 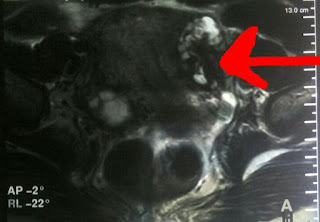 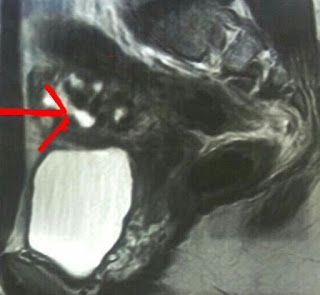 An invasive mole occurs commonly after the evacuation of GTD. Edematous chorionic villi with trophoblastic proliferation are its characteristic. It can invade into the myometrium of the uterus or to adjacent structures.[4] Invasive mole usually presents with vaginal bleeding, an enlarged uterus and high urinary or serum β-HCG level. It mostly occurs following the evacuation of a molar pregnancy. Choriocarcinoma can occur after a hydatidiform mole or even after a normal pregnancy. Choriocarcinoma usually occurs after interval of more than six months. β-HCG levels are much higher than in invasive mole.[5] Persistent raised level of β-HCG, should suggest GTN after evacuation of a complete mole.
The cancer committee of the international federation of gynecologists and obstetricians (FIGO) has established the regression guidelines for the diagnosis of post molar gestational trophoblastic neoplasia.[6]
Ultrasonography (USG) is one of the important tools in diagnosis of suspected GTN.[7] On USG an invasive hydatidiform mole, a placental site trophoblastic tumor, and choriocarcinoma typically exhibit a heterogeneous, hyperechoic, solid mass with cystic vascular spaces, located within the myometrium.[7,8] Color doppler imaging helps in the assessment of neovascularisation in these tumors. A combination of both biochemical findings and USG appearances helps to differentiate between these.[9] Invasive mole can rarely metastases to the lungs. Metastases are more common with choriocarcinoma.[10] The absence of metastases helps to rule out choriocarcinoma.
Management of an invasive mole includes treatment with chemotherapy as well as continuous monitoring of β-HCG. Methotrexate is helpful in treatment of most non-metastatic and low risk cases.[11,12] Follow up of Patients with GTN should be with weekly quantitative β-HCG levels until the values are normal for three consecutive weeks, then should be monitored monthly for 12 months.