The concepts in the management of placenta previa are changing. But the pathology does not change much. If a patient with placenta previa delivers vaginally, examination of the placenta and membranes helps confirm the diagnosis was correct. An image of the same would help graduate and postgraduate students make this diagnosis during their examinations. Such an image is presented here.

The definition of placenta previa keeps changing. It was location of the placenta within 3 inches (7.5 cm) of the internal os in 1969.[1] Now it is within 2 cm of the internal os.[2,3] However vaginal delivery can still be allowed depending on the clinical circumstances. The diagnosis is mad by ultrasonography (USG). It is more accurate when transvaginal USG is used. The diagnosis is rarely made by actual clinical examination. A case is presented in which a preterm patient with placental abruption diagnosed on USG was detected to have a marginal placenta previa on clinical examination. The image of her placenta and membranes is presented here for educational purpose.

A 34 year old woman, gravida 5 para 4, presented at 32 weeks of gestation with preterm labor. She had 4 full term normal deliveries in the past. Her antenatal course had been uneventful, and hematological, biochemical, serological investigations and obstetric USG reports were normal. The placenta was diagnosed to be in the upper segment on the left side. Her general consition was good and systemic examination revealed no abnormality. There was a sigle fetus in vertex presentation and fetal heart rate was 144 bpm.  She was administered tocolysis and betamethasone. She developed premature rupture of membranes and acute pain in abdomen after 24 hours. A clinical diagnosis of concealed placental abruption was made. It was confirmed by USG. Labor was induced with oxytocin infusion. During the course of labor, the placental edge was felt at the left edge of the internal os at 4 cm dilatation of the cervix. There was no vaginal bleeding. Oxytocin infusion was continued and she was delivered vaginally uneventfully after  six hours. The appearance of the placenta and membranes is shown in figure 1. 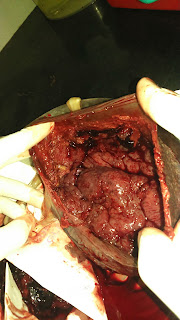 The placenta and membranes were normal. The opening in the fetal membranes through which the fetus delivered was found to be next to the edge of the placenta. The patient made an uneventful recovery.

During the process of childbirth, the membranes rupture spontaneously or are ruptured artificially early or late depending on prevailing obstetric practices and also depending on the obstetric condition. Since this is done above the cervix, it is away from the placenta implanted in the upper segment. This becomes evident when the placenta and membranes are examined after childbirth. If the placenta is implanted in the lower segment, the opening the fetal membranes will be near the placenta, the distance from it being equal to the distance between the placental edge and the internal os. If the placenta is marginal i.e. it reaches the internal os, this opening will be right next to the placenta,[4,5] as was found in the case presented. This does not hold true in a case delivered by cesarean section, as the opening in the membranes is under the anterior part of the lower uterine segment and the location of the placenta is variable.

Except in cases delivered by a cesarean section, location of the opening in fetal membranes near the placental edge indicates placenta previa.

I thank Dr Jagtap V for taking and providing a picture of the specimen.

Parulekar SV. Location of Opening In Membranes After Vaginal Delivery in A Case Of Placenta Previa JPGO JPGO 2015. Volume 2 Number 11. Available from: http://www.jpgo.org/2015/11/location-of-opening-in-membranes-after.html