A gravida para 1 living 1 patient with previous LSCS presented to the out patient department with complaints of lump and pain at the left side of the lower abdomen, close to the previous cesarean scar, for which the patient had undergone fine needle aspiration cytology, which was suggestive of scar endometriosis. She had undergone a LSCS 2 years prior in view of meconium stained amniotic fluid. Operative notes showed that the cesarean section was uneventful.  The patient had developed symptoms of cyclical pain and increasing size of the mass during menstruation.
On local examination, a healthy Pfannenstiel scar of LSCS was noted. There was a firm, minimally tender lump of around 1.5x2 cm close to the left angle of the Pfannenstiel scar, which was subcutaneous in origin. On speculum examination, cervix and vagina were healthy, and bimanually uterus was anteverted, normal sized, with clear fornices. The patient was to be posted for excision of scar endometrioma.
However, the patient conceived spontaneously and had an uneventful regular follow-up in the antenatal OPD. At term gestation, in view of a breech presentation, the patient was taken up for a repeat LSCS. A Pfannenstiel incision was taken and the previous scar was excised. There were no adhesions and no difficulty in opening the layers of the abdomen. A thin flimsy band of adhesion was present between the omentum and serosa of the uterus. (figure 1).
The uterus was eventrated and examined to note that the pouch of Douglas and posterior surface of the uterus had spots that were bluish and engorged which appeared endometriotic. It was decided not to cauterize the endometriotic spots, in view of the possibility of hemorrhage, due to the pregnant state. The ovaries were found to be normal.
Abdominal closure was done in layers. After closure of the rectus sheath, the subcutaeneous tissue above the left edge of the incision was palpated to find, a single nodular 2x1x1 cm irregular, firm, lobulated, glistening, grey-white colored tissue, which was delineated en-mass by blunt and sharp dissection (figure 2) A simple wide excision was done, that is; a small amount of normal tissue around the mass was removed so as to ensure complete removal. The tissue was sent for histopathological examination.  Delayed absorbable sutures were taken to achieve hemostasis and obliterate the space from which the mass was excised. Skin was approximated with polyamide No 2-0 sutures. Postoperative period was uneventful. The histopathology report showed fibromuscular adipose tissue with nests of cells having abundant glassy cytoplasm with vesicular nuclei, with cyst-like spaces lined by flattened epithelium, which was reported to be consistent with “subcutaneous endometriosis with decidualization”. 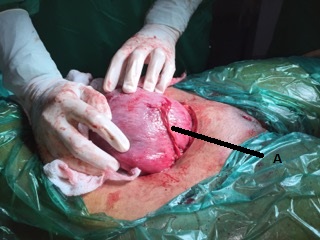 Figure 1. Flimsy band of adhesion (A) in the anterior surface of the uterus, which was left undisturbed. 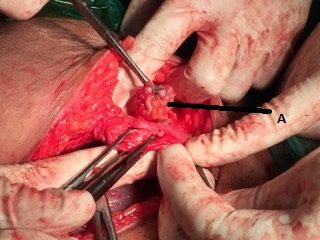 Figure 2.  Endometriotic mass (A) being held with Babcock forceps, prior to excision.

Scar endometriosis occurs as a result of direct inoculation of endometriotic tissue at the scar site during previous surgery. In clinical practice, the occurrence of scar endometrisois has been observed at scars following cesarean section, appendicectomy, hysterectomy, tubectomy and other procedures. [2] Among these, cesarean section appears to be the most common associated operative procedure, even if done by vertical midline incisions.[3,4] Endometriosis following laparoscopic surgery has also been described.[5]  Coexistence with perineal endometriosis has also been described.[6] As yet, it is a rare entity and no reliable estimate about incidence is found in the literature. The mean age of presentation is reported as 32 years, and the commonest symptoms are abdominal lump and pain. It is commonly described to occur as a single mass, and just beneath the previous scar.[3] The classically described symptoms, which were actually present in our patient, of cyclical pain and increase in size of the tissue mass perimenstrually, are reported to be found in only about 20% of the patients.[7] Lipomas, sebaceous cysts, lymphangiomas and desmoid tumors are common differential diagnosis. Occasionally, it can also be mistaken for an incisional hernia or a stitch granuloma.[8,9,10,11]
Among the imaging techniques, while ultrasonography is the most commonly used modality, MRI has a superior role.[3,9] Very few reports have described the use of fine needle aspiration cytology (FNAC) for the diagnosis of scar endometriosis.[12,13] However, FNAC is not diagnostic , and suspicion of malignancy might require further diagnostic modalities.[14] Though malignant transformation is a possibility, it a very rare event which needs to be kept in mind.[15,16].  However, the gold standard to the diagnosis of endometriosis is the histopathological report.[3] Due to these reasons, excision of the mass should always be considered as the definitive management of the condition. A small case series has demonstrated that the use of percutaneous cryoablation to be effective in treatment of scar endometriosis.[17] High intensity focused ultrasound (HIFU) and ultrasound-guided sclerotherapy with ethanol also appear to be options in the management of this rare condition.[18,19] However, wide local excision continues to be the recommended procedure,[3] as was done in our patient.