Puerperal infection is a general term used to describe any bacterial infection of the genital tract post-delivery upto 42 days. Proper asepsis can prevent puerperal sepsis.[1] If asepsis chain is broken at any point the presentation is in varied forms. The percentage of cesarean section has increased drastically as compared to yester years. Post operative LSCS uterine scar dehiscence is one of the rare presentations.[2] Infection was fifth leading cause of maternal death in a survey done in U.S. from 1991 to 1997.[3] In India sepsis is the second cause after haemorrhage leading to maternal mortality. Preeclampsia, obstetric hemorrhage and puerperal infections formed the lethal triad of causes for maternal deaths in the previous century.

A 28 year old woman, para 1, fresh still birth 1, day 13 of emergency lower segment cesarean section (LSCS) with vaginal exploration and episiotomy suturing done at a private medical college was referred to us from a private practitioner in view of ultrasonography (USG) done outside suggestive of ?pyometra, and peritonitis with sub-hepatic and sub-phrenic collections. Review of her operative notes suggested that the indication for emergency LSCS was second stage arrest of descent after 2 hours of vaginal trial of labor, fetal distress and repeated unsuccessful attempts at instrumental delivery. Her pre-operative hemoglobin was 9.5gm%. Intra-operatively the patient had atonic PPH for which uterotonics, and two units packed cell transfusion was given. B-Lynch compression suture was taken with polyglactin 910 no 1 as the uterus remained atonic. Vaginal exploration with episiotomy suturing was done. Total duration of surgery was approximately 3 hours. Patient had repeated episodes of temperature elevations from post operative day 3 onwards. She was investigated and sent home on day 5 after an afebrile period of 24 hours and after excluding wound site infection. She again became febrile from the 7th postoperative day wherein she took treatment from a private practitioner. As oral antibiotics did not work the patient was admitted for injectable antibiotics and had received parenteral Cefoperazone, Piperaciliin and Tazobactam combination, Metronidazole and Gentamycin. At the time of admission to our institution on 13th post operative day , the patient was afebrile, had bradycardia and was pale. On abdominal examination the patient did not have guarding, rigidity or tenderness. There was ascites, and the cesarean section Pfannensteil incision was healed and healthy, uterus was palpable, and 14-16 weeks in size. On local examination there was purulent discharge at the episiotomy site; wound swab for culture was sent. On vaginal examination the vagina was hot, uterus was 14-16 weeks size and foul smelling lochia was present. High vaginal swab was sent for culture sensitivity. Patient was admitted, broad spectrum parenteral antibiotics (Piperaciliin and Tazobactam combination, Metronidazole and Gentamycin) were started, and daily dressing for the episiotomy wound was done. USG repeated from our institution showed a rent in the anterior wall of the myometrium at the LSCS incision site, with anterior wall collection of 4cm*2.5cm*2.5cm size. One of the suture material appeared to extend from the site of the rent to the posterior uterine wall. There was no clinical as well as radiological signs of peritonitis. To confirm the diagnosis, a CT-scan and MRI pelvis was done for the patient and both investigations confirmed the uterine scar dehiscence as shown in the figure. 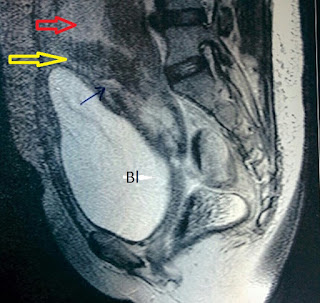 As the patient did not have any episodes of bleeding, or severe abdominal tenderness and vital parameters were stable, decision to defer exploration was taken. Decison for conservative treatment was based on literature review.[1] Her high vaginal swab grew E.coli and Klebsiella pneumonia. They both were sensitive to piperacillin and tazobactam. Gentamicin and metronidazole were stopped after 10 days but Piperaciliin and Tazobactam combination was continued. She became and remained afebrile for 13 days after starting antibiotics however on the 14th day while on Piperaciliin and Tazobactam combination the patient developed again repeated fever spikes and hence her blood culture was sent which was negative for growth. All possible causes of fever were ruled out and patient was started on parenteral cefoperazone and sulbactam for 21 days. Anemia was corrected by oral and parenteral hematinics. Patient responded well and was discharged on day 45 post-postpartum after an afebrile period of 48 hours. Patient came for follow up on day 62 of LSCS . On vaginal examination the uterus had become a normal sized pelvic organ and no forniceal tenderness was elicited. Repeat USG showed a healed intact scar of LSCS and there were no collections.

Puerperal sepsis is an infection of the genital tract which occurs as a complication of delivery. There has been a marked decline in the incidences of puerperal sepsis due to stress on the maintenance of asepsis in labor room and operation theaters. Endometritis, endo-myometritis and endoparametritis are the various names given to postpartum uterine infection [3]. There have been various predisposing factors for puerperal infections. Route of delivery being the most important factor. As compared to cesarean section the metritis related to vaginal delivery is very uncommon. In case of vaginal delivery the duration of rupture of membranes, repeated vaginal examinations, presence of vaginitis, anemia and prolonged labor pose a risk for puerperal sepsis. Our patient was anemic in the antenatal period and was in second stage of labor for almost two hours with an episiotomy and multiple attempts at instrumental delivery; all factors favored infection. Besides, the duration of operation was prolonged and the patient had atonic PPH which further increased anemia and her susceptibility for puerperal sepsis. Most common pathogens involved in the puerperal sepsis are bacteria from the female genital tract [3]. Puerperal infection following vaginal delivery involves the placental implantation site where as the cause of uterine infection in cesarean section is the infected surgical incision. Fever is the most important presenting feature in puerperium and should not be taken lightly. Cesarean section scar dehiscence is a rare form of presentation of puerperal sepsis and occurs due to severe cellulitis and necrosis at the incision site. Incidence of uterine scar dehiscence in immediate post operative period is not documented in literature. In the immediate post-postpartum period it can present as a cause of secondary hemorrhage. If associated with pyometra then it may also lead to peritonitis. Identification of the cause requires high index of suspicion and confirmation using radiological modalities. MRI has been considered to be the most definitive modality for evaluating the uterine incision healing after cesarean section [4]. During surgery B-Lynch compression sutures were taken for atonic PPH. This procedure has been widely recommended to control PPH. Sutures were taken with polyglactin 910. B Lynch recommended the use of chromic catgut No 2 for these compression sutures.[5] Polyglactin 910 sutures are braided, have more tensile strength than chromic catgut and also remain longer prior to absorption. Certain complications of this surgical technique have been reported till date. Erosion of B-lynch through the uterine wall at 6 weeks postpartum was reported by Groetgul et al [6]. Also a case of total uterine necrosis as a complication of B-lynch suture has been reported by Somalwar et al [7]. We do not know whether the B Lynch suture was the cause or the contributory factor along with infection of the post operative scar dehiscence. But we do feel that the use of polyglactin could have resulted in the suture line ischemia by local compression or cutting into the soft infected tissues of the atonic uterus. In cases with post operative LSCS scar dehiscence exploratory laparotomy with repair was considered to be the treatment in the past. However due to fragile nature of the infected tissue and excessive bleeding most of the cases landed up with subtotal/total hysterectomy [8]. Recently microsurgical, laparoscopic repair have been reported [4]. There are reports wherein the scar dehiscence have been managed conservatively using only antibiotics for treating the infection and the uterine incision is allowed to heal by secondary intention [1]. Our patient was reluctant for surgical management as she understood the need and the risk of hysterectomy. She desired childbearing. In our case with good infection control and correction of anemia the LSCS wound gape healed by secondary intention. The consequence of this complication for future pregnancies is unknown, however the chance of rupture in future pregnancy is considered to be high [1] [4]. Such patients should undergo close monitoring of all her future pregnancies and should be delivered by an elective LSCS.

Thus it can be concluded that to prevent is better than to cure. Proper aseptic measures taken will help us reduce the rate of maternal morbidity and mortality. We feel B-lynch sutures at times are taken hastily. However the complications related to B lynch compression sutures needs to be studied in detail and should be kept in mind before taking the sutures. It is also essential to use the recommended suture materials.