Rupture Of Hydrosalpinx Into Broad Ligament During Hysterosalpingography

Hysteroslpingography is one of the most commonly used methods of assessment of the uterus and fallopian tubes in evaluation of female infertility. Though considered safe, there are some complications of the procedure. Rupture of the hydrosalpinx into the broad ligament is a complication that is described here for the first time in the world literature.

Hysterosalpingography has been used for years in the assessment of female infertility.[1,2] It gives useful information on the uterine cavity and fallopian tubes. It is best carried out under image intensified fluoroscopic control, so that irradiation is minimized, and excessive injection of radiopaque dye or use of excessive force during injection can be avoided.[3] Either or both of these factors can lead to a rupture of a hydrosalpinx, in cases with bilateral tubal block. Radiologic appearance of a rupture of a hydrosalpinx into the broad ligament is presented here.

A 30 year old woman, married for 9 years, presented for management of her infertility. She had suffered from abdominal tuberculosis in the past, and had received antituberculous therapy. After completion of her treatment, she started undergoing valuation of her infertility. She presented to us with reports of her various tests, including hemogram, urinalysis, liver and renal function tests, serology for syphilis and HIV, and chest radiogram. These reports were normal. Hysterosalpingography was done by a radiologist. Its appearance is shown in figure 1. 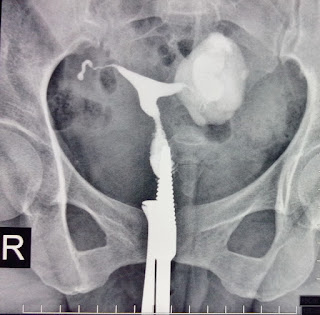 The patient was explained that the tubes were most probably damaged due to tuberculosis as an extension of her abdominal tuberculosis. The poor prognosis of a tubal reconstructive surgery was explained to her. She was counselled to undergo either in vitro fertilization and embryo transfer, or to adopt a child.

A hydrosalpinx is a distension of a fallopian tube due to block at its lateral end. That produces a retort-shaped swelling. A hysterosalpingography shows a retort-shaped shadow in such cases.[4,5] Since the fluid inside the hydrosalpinx is in an enclosed, space, forceful injection of any fluid into the uterine cavity and from there into the fallopian tube would result in excessive distension of the hydrosalpinx, if the other fallopian tube is blocked too. Such overdistension can be avoided by observing the uterus and fallopian tubes during the performance of the procedure under fluoroscopy. In the case presented, the right fallopian tube was blocked in the ampullary portion. The left fallopian tube had formed a moderate sized hydrosalpinx. Thus its walls were much thinner than tose of a normal tube. Forceful injection of the dye probably caused a rupture of the hydrosalpinx. If the rupture had occurred into the peritoneal cavity, the radiopaque dye would have escaped into the peritoneal cavity and would have spread, covering serosal surface of bowel. If it had ruptured intraperitoneally and peritubal adhesions were present, it would have produced a localized irregular shadow, the dye spreading into nonadherent parts between adherent surfaces. The localized shadow surrounding the hydrosalpinx is rounded, smooth surfaced and unilocular. Though a lateral film was not available, which would have shown forward and backward bulging of the shadow, it appears that it would have been so, since such a bulging would be unlikely to be confined only to the coronal plane. Actually such a phenomenon has been witnessed during laparoscopy and chromopertubation too (personal unplublished data), in which a spherical distension of the broad ligament by methylene blue had been seen. Since the dye had spread over a larger area (between two leaves of the broad ligament) and was probably mixed with the fluid in the hydrosalpinx which escaped along with the dye into the hydrosalpinx, the shadow cast by the loculated spill was less dense as compared to that cast by the hydrosalpinx. The site of the rupture must have been small, so that all contents of the hydrosalpinx did not escape into the broad ligament. Since the plates were obtained within a short time of the previous plates, the dye which had escaped into the broad ligament did not have time to spread out retroperitoneally.

Hysterosalpingography can cause rupture of a hydrosalpinx into the broad ligament due to force of injection of the dye. The radiological appearance of this complication is unique.